For a long time, network engineers have had no choice but to work with monolithic switches designed with vertically integrated hardware and software. While with pioneer bare-metal switch vendors gaining momentum, the network switches are changing. Software and hardware vendors are innovating.

Currently, there are proprietary operating system and open source operating system. Generally, the proprietary OS or closed source OS is conceptualized, designed, developed and sold by a particular company and not meant to be tampered with or tweaked by users. Proprietary OS typically runs on name-brand vertically integrated switches. While the open source OS can be used, changed, and shared by anyone. It is made by many people, and distributed under licenses that comply with the Open Source Definition. Open source network operating systems normally run on open switches, white-box switches, or bare-metal switches.

Cost—One of the main advantages of open source software is the cost. If you have the in-house capabilities and technical expertise to maintain the software, and resources to implement, train and provide support to staff, then open source may be most cost-effective for your organization. For a closed source CMS, depending on the complexity of the system, the cost can vary between a few thousand to a few hundred thousand dollars, which includes a base fee for software, integration and services and annual licensing/support fees. 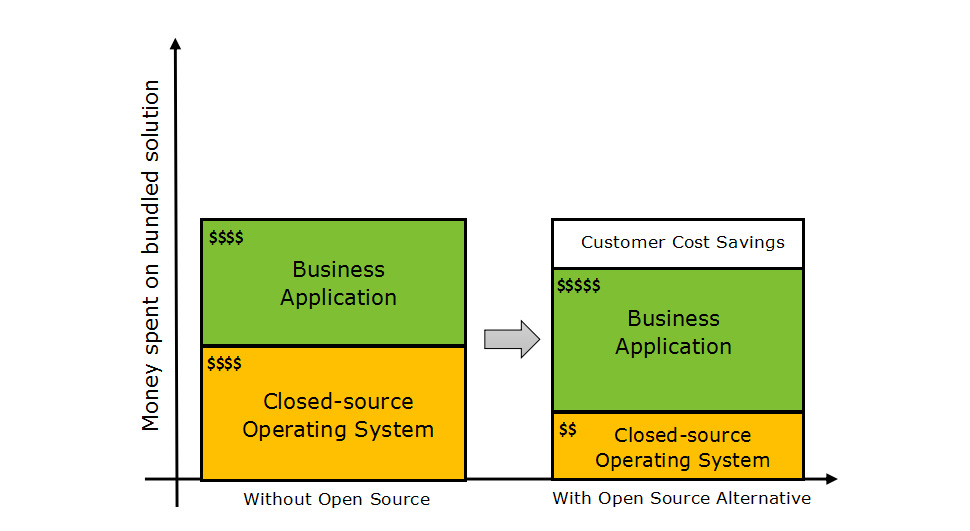 As the picture shows, for the customer, an open source alternative saves money, while for the business application vendor more money becomes available, at the expense of the closed source operating system vendor, who misses a sale.

Usability—Usability is often a major area of criticism for open source, because the technology is generally not reviewed by usability experts and caters to developers rather than the vast majority of layperson users. For closed or proprietary software, usability is a high selling point due to expert usability testing for a more targeted audience.

Security—Security of open source is often a concern for large companies because software is not always developed in a controlled environment. One way to reduce this potential risk is to adopt a reputable brand with a concentrated development team supported by a strong online community. Proprietary or closed software is generally seen as more secure because it is developed in a controlled environment by a concentrated team with a common direction.

Not all switches are created equal. At present, the switches in the market can be divided into two categories. One is the bare-metal switches decoupling hardware from software and allowing third-party software to be used on the switch, and the other is traditional vendor-based switch offering that comes with pre-loaded proprietary software. For any network engineer, reliability and support are nonnegotiable requirements. Some contend that open switches can provide greater reliability than proprietary ones.

Firstly, the proprietary switches are more expensive. For the price of one traditional switch from Cisco, an enterprise can purchase at least four open switches and affordably keep multiple spares or redundant pairs on hand.

Secondly, when a proprietary switch fails, the vendors offer to ship some replacement parts. But having to wait for those to arrive can be costly if it causes downtime. Just two hours of network downtime could cost tens of thousands of dollars. In contrast, bare-metal switch not only is reliability easier and cheaper to achieve with open switches but also support can be done in-house more often. That’s because many third-party operating systems run on bare-metal switches are based on Linux. As the switches use an open system, the admins can troubleshoot and manage them using standard, Linux-based server tools they already have. That translates into less time waiting for a vendor to process a help desk ticket or ship replacement parts.

Thirdly, for many enterprises, the team running the data center comes from the IT side, so there is no reason why a switch should be provisioned differently than a server. They want to manage them like servers and want them to be programmable. Bare-metal switches offer that option and allow them to select a specialized operating system according to their needs.

Therefore, bare-metal switches are considered by many network guys. When choosing bare-metal switches, besides the software performance, you should also pay attention to some hardware parameters, such as switching capability, throughput, latency, non-blocking bandwidth, etc. For instance, FS.COM N-series 25G/100G open switches are high performance L2/L3 switches. They have high switch capability, low latency and large throughput, which are perfect for next generation metro, data center and enterprise network applications. Furthermore, both the bare-metal type and those with pre-loaded licensed Broadcom ICOS and Cumulus Linux OS can be offered. With our bare-metal switch, you can install the network operating system by your special requirements, such as OcONOS, Open Network Linux, PicOS, etc.

In the recent past, open source OSs have seen a significant developments. It’s going strong after nearly 30 years and still has its die-hard supporters. The quality of service (QoS) of the open source software outperforms the proprietary software in many areas. There is no doubt that the business model for open source licensing and products is establishing itself in the mainstream, especially as open source gains momentum with a growing community, contributors. Even so, open source OS still has a long way to go since it has only established a sizeable presence in the software world, but not won proprietary OS over entirely, or have not completely displaced proprietary and closed source alternatives in the network OS comparison. 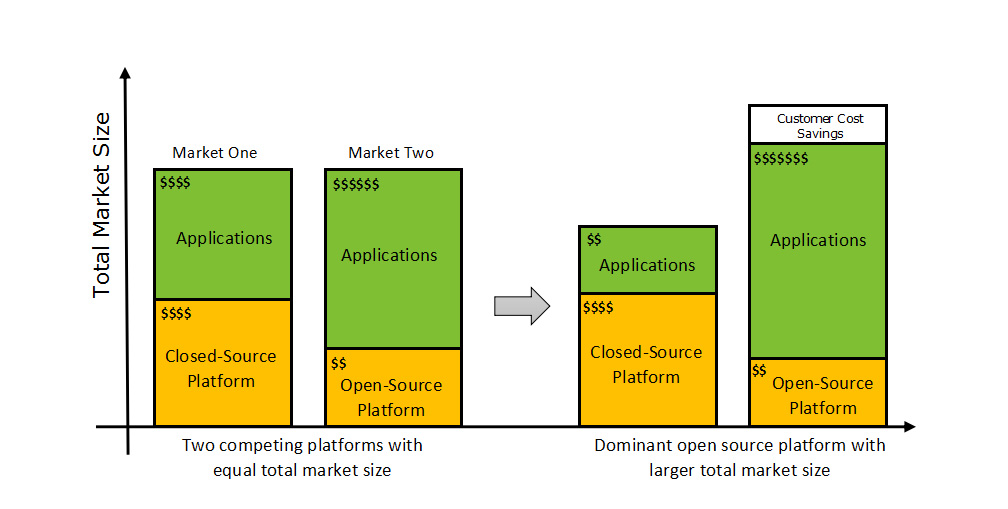