FS CommunityKnowledge CenterNetwork Packet Broker(NPB): How Does It Differ from Network TAP?

Network Packet Broker(NPB): How Does It Differ from Network TAP?

First, let's dive into what NPB and network TAPs are and how they work.

A network TAP is a tool that monitors traffic flow on a local network. It is typically a stand-alone hardware device that provides an access to the data and make an exact copy of the traffic flowing across the targeted network.

In physical networks, a network TAP is typically deployed in a network link connected between the interfaces of two network elements, such as switches or routers, and is treated as part of the network infrastructure, similar to a patch panel.

Network TAPs are the base layer of Smart Network Access and are able to monitor various events on a local network, meaning total visibility is maintained across all of the network's security and monitoring platforms, which is vital for the performance of any and all networks.

The network TAP has (at least) three ports: an A port, a B port, and a monitor port. A tap inserted between A and B passes all traffic (send and receive data streams) through unimpeded in real time, but also copies that same data to its monitor port, enabling a third party to listen.

What Is A NPB (Network Packet Broker)?

NPB is a device that optimizes the traffic between TAP and SPAN connections and network monitoring, security and acceleration tool. It is also called "TAP Aggregator" or "Traffic Aggregator". It enhances the performance of network analysis and security tools, helps to optimize application performance and solve network problems. 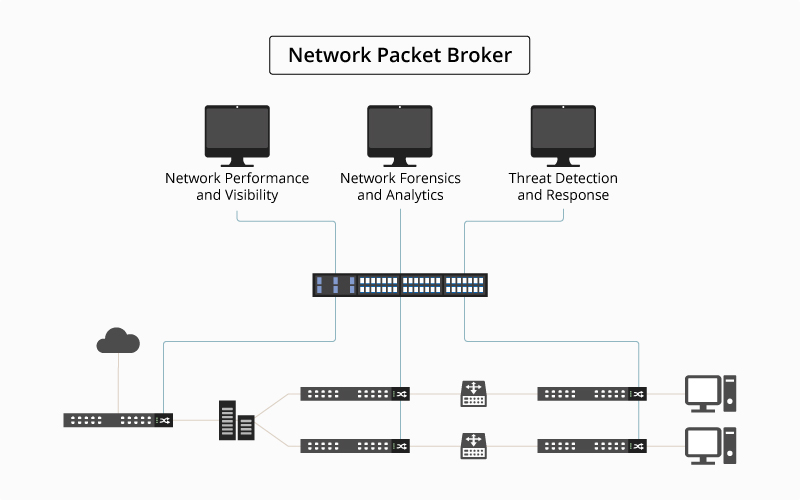 Both the creation of these two devices are meant to be arranged in groups with other analysis devices to monitor the traffic and ensure network security. Compared with network TAPs, network packet brokers can accomplish traffic filtering, load balancing, SSL decryption and most importantly, optimize network security and your IT investment.

Based on that TAP provides embedded and integrated security on your network, a NPB gives possibility to virtually deploy tools, to help detect and shut down IT threats. The application of network packet brokers and TAPs avoids all impacts on your network functions and gain in flexibility to answer proactively to incidents.