Does an Open Switch With Cumulus Linux Equal a Proprietary Switch?

As you may know that open network is a hot topic these days. It is enabled by several parts such as open source software, open compute hardware, etc. Under this trend, another related topic, open switch, has caught much attention as well. Then, what is open switch? How does it differ from the traditional proprietary switch? In this post, we will focus on the comparison on a proprietary switch (Cisco, Juniper and HPE switches, etc.) and an open switch preloaded with the open source software Cumulus Linux.

To begin with, you should know what exactly open switches (e.g. with Cumulus Linux OS) and proprietary switches are before comparing these two types of network switches. Just get a general introduction from the following two parts.

Normally, an open switch is regarded as a network switch whose hardware and software are provided by separate entities and can be changed independently without affecting each other. Open switch hardware is designed to adapt to different types of network operating systems (NOS, which refers to open source software here), and vice versa.

Generally, an open switch comes pre-installed with a bootloader—Open Network Installation Environment (ONIE), which offers an environment for installing any NOS on a bare metal switch. ONIE allows end users to automatically install a NOS as part of a data center configuration. It is an Open Compute Project (OCP) open source project created by Cumulus Networks.

What Is Proprietary Switch?

Proprietary switch, also known as a closed switch, is conceptualized, designed, developed and sold by a particular company and can not be tampered with or tweaked by users.

With the general introduction about open switch preloaded with Cumulus Linux and proprietary switch above, it’s easier for us to tell the difference between the two. Next, let’s take the comparison of the open switch FS N5850-48S6Q (a 40GB switch with Cumulus Linux) and proprietary switch such as Cisco, Juniper and HPE switches as an example to get a deeper understanding.

You may know the functions of a traditional switch (or a proprietary switch), therefore, we will focus on the open switch FS N5850-48S6Q here. It has the following main functions:

It is obvious that as an open switch, it almost has all the functions that a propriety switch (Cisco, Juniper, HPE, etc.) supports. Moreover, since the Cumulus Linux is based on the Debian Linux operating system, it carries the full Linux features. Thus, a Cumulus Linux switch has a better experience in manpower saving through standard orchestration and provisioning tools.

Apart from the functions, the operation environment is also worth mentioning. Compared with the operation environment of an open switch preloaded with Cumulus Linux, a proprietary one is more closed. For example, Cisco, juniper or HPE switches are all developed based on Linux OS which is compatible with their own switches. This operating system is inconvenient if the customer wants to update a function. At that time, there is nothing to do but wait for the vendors to evaluate whether the function is worthy of being updated, which is traditional.

While, for an open switch with Cumulus Linux OS, if a customer wants to update a feature, as long as the developer community has a corresponding new version, the customer can update it on his or her own, which is more flexible than a proprietary one. In addition, since the Cumulus Linux is an open source software, the source code of it is public, which means anyone (whether the user of the system or engineers from both internal or external) can help modify and upgrade the Cumulus Linux OS. It enables a veritable open environment.

For proprietary switches, you are forced to accept the associated software and support provided by the switch vendors. For example, if you buy a Juniper EX or MX, you need to buy JUNOS. If you buy a Cisco Catalyst switch, you have to buy IOS. If you have trouble with the switch no matter in hardware or software, you have to turn to the exact vendor for help to fix it, which will cause huge maintenance costs.

For an open switch with Cumulus Linux, it is easier to do troubleshooting and you can change the bare metal switch as you like since the Cumulus Linux is compatible with 70+ hardware platforms, which makes future management more flexible. And of course this facilitates money saving. 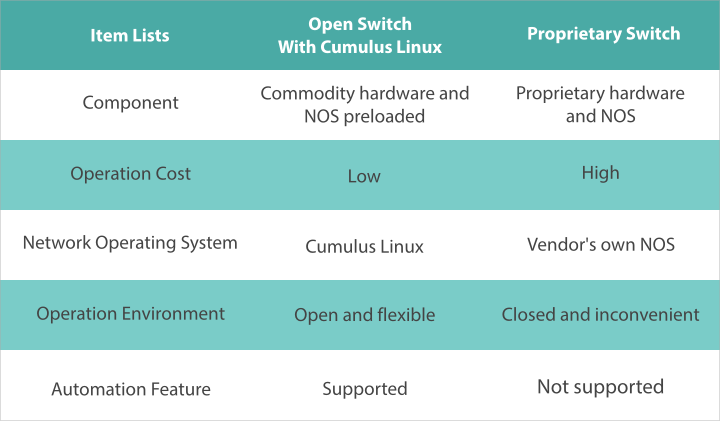 All in all, it is obvious that the open switches are contrary to proprietary switches, whose hardware and software are always purchased together. An open switch with Cumulus Linux is full of choice, giving network users more options both in management, operation environment and budget.