The demand for higher Ethernet speed, coupled with the prevalence of Cloud computing, the Internet of Things, and virtual data centers, has driven the global optical transceiver market to evolve dramatically to catch leading edge broadband network capacity. The past decades have witnessed massive adoption of 1G, 10/25G to 40/100G optical transceivers, while higher-speed 200G and 400G transceivers are just on the horizon. The sales of high-speed optical components grow steadily and are expected to continue in the years to come.

As the network gets faster and virtualization gradually becomes the norm, data centers are undergoing a significant transformation. The trend emerging in the industry signifies a migration toward higher-speed transceivers and better service. With the widespread use of 10/25 Gbps, 40 Gbps, and 100 Gbps, high-bandwidth transceivers such as 200G and 400G transceivers are also gaining growing popularity.

10G Transceiver: Moving to the Edge

Initially offered in the early 2000s, 10G optics has matured now to become commonplace in data centers. Basically the 10G Ethernet is stacked to move to 40G and 100G at the access layer, following the upgrade path of 10G-40G-100G, which, however, will quadruple the cabling complexity, power consumption and overall cost. And this will be exacerbated when aggregating into 100G (10×10G) interface.

So there comes the game changer: 25GbE for better economics and efficiency. SFP28 optical transceiver compatible with SFP+ is designed for 25G Ethernet, delivering 2.5 times higher speed per lane at lower power. As 25GbE makes the road to 100G smoother with reduced cost, lower power consumption and less cabling complexity, some users even plan to skip 10G and directly deploy 25G Ethernet for better scaling to 50G and 100G. 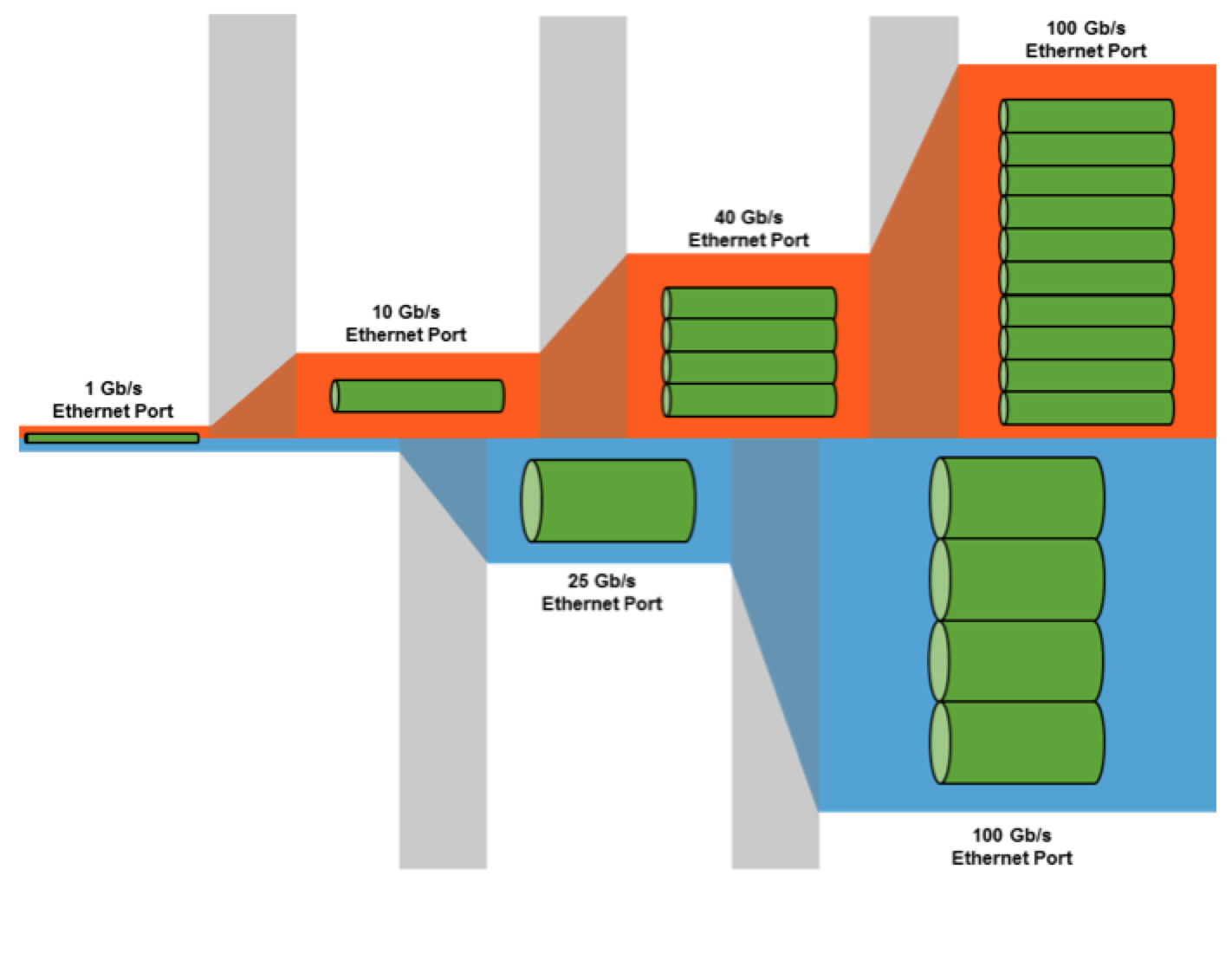 Obviously, 10GbE is no longer fast enough for data centers handling large-scale applications, so 40G is designed to alleviate bottlenecks in the access layer. The cost of 40G is extremely high at first, making the implementation of 40G technology difficult. Luckily, we’ve seen significant cost reduction of 40G transceivers in the past several years, which accelerates their adoption in aggregation links, or in access links to connect servers.

Currently 100G are the fastest Ethernet connections in broad adoption, which is growing sustainably. And the optical transceiver market indicates that 100G QSFP28 module price will continue to drop, making the cost difference between 40G and 100G even smaller. Moreover, 25G server and 100G switch became commonplace in most hyperscale data centers that replaced previous 10G servers and 40G switches. Vendors of 100G QSFP28 transceiver will continue to grow the product and push the limits of its versatility.

Another foreseeable trend in the interconnect market is the phase-out of low-speed transceivers in the core of networks and in data centers. So here comes the major shift from 10G/25G/40/100G to 200G and 400G transceivers: next-generation 200G and data center 400GbE deploy started in 2018, and has gradually been mainstream by now. On the whole, the optical transceiver market is evolving to higher speed, more reduced power consumption, and smaller form factor. Let’s take a look at these future-proofing 200G and 400G optical transceivers.

DACs (direct attach copper cables) and AOCs (active optical cables), with their inherent advantage of enhanced signal integrity and superior flexibility, have become the preferred, cost-effective interconnect for high-speed links at 10G, 25G, 40G and 100G for about all applications in hyperscale and enterprises, and is likely to be used for 200G and 400G as well. 400G DAC and 400G AOC are witnessing tremendous growth in the data interconnect market, and there is no doubt that sales will keep surging in the years to come.

According to a recent study, the global 400G optical transceiver market is expected to continue to increase in popularity and sales in the coming years, eventually reaching $22.6 billion by 2023. Global internet adoption, online commerce, streaming video, social networking, cloud services and software as a service (SaaS) all play into this business networking trend, as does the availability and cost-effectiveness of 400G transceivers. So just stay tuned and embrace the significant opportunities that lie ahead for the optical transceiver market.