OTDR Dead Zone Explained: How to Eliminate Its Effect? 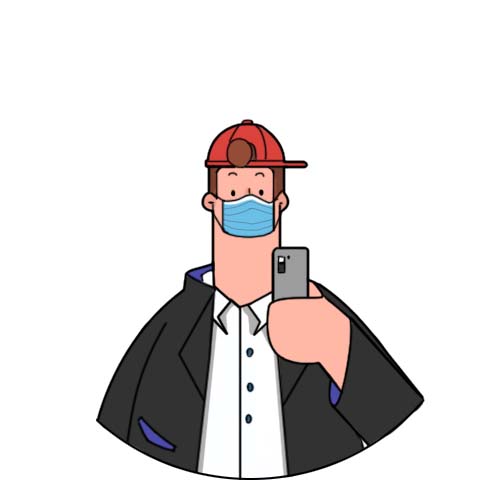 Optical Time Domain Reflectometer (OTDR) is one of the most versatile and widely used fiber optic testers to certify the performance of new fiber optic links and detect the issues of existing fiber links. As one of the key specifications in OTDR, OTDR dead zone is worth to be noticed for better link testing performance.

What Is the OTDR Dead Zone?

The OTDR dead zone refers to the distance (or time) where the OTDR cannot detect or precisely localize any event or artifact on the fiber link. It is always prominent at the very beginning of a trace or at any other high OTDR reflectance event. 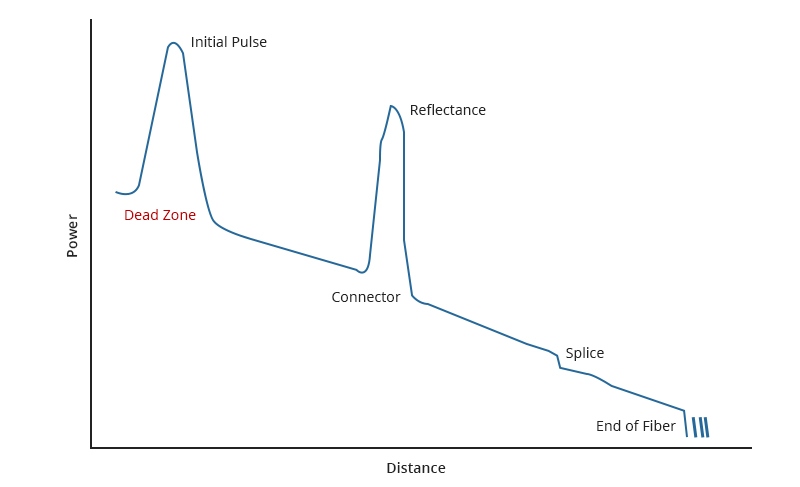 OTDR dead zone is caused by a Fresnel reflection (mainly caused by air gap at OTDR connection) and the subsequent recovery time of the OTDR detector. When a strong reflection occurs, the power received by the photodiode can be more than 4,000 times higher than the backscattered power, which causes the detector inside of OTDR to become saturated with reflected light. Thus, it needs time to recover from its saturated condition. During the recovering time, it can not detect the backscattered signal accurately which results in a corresponding dead zone on the OTDR trace. This is like when your eyes need to recover from looking at the bright sun or the flash of a camera. In general, the higher the reflectance, the longer the dead zone is. Additionally, OTDR dead zone is also influenced by the pulse width. A longer pulse width can increase the dynamic range which results in a longer dead zone.

In general, dead zone in OTDR can be divided into event dead zone and attenuation dead zone.

The event dead zone (EDZ) is the minimum distance between the beginning of one reflective event and the point where a consecutive reflective event can be detected. According to the Telcordia definition, the event dead zone is defined as the distance between two cursors set 1.5 dB below a reflective peak. In single mode OTDRs, the EDZ value can be as low as about 1 meter. For multimode instruments, the shortest EDZ is about 20 cm. The purpose of the EDZ specification is to provide an indication of the distance after a connector where an accurate length measurement can be made.

The shortest-possible event dead zone allows the OTDR to detect closely spaced events in the link. For instance, testing fibers in premises networks (particularly in data centers) requires an OTDR with short event dead zones since the patch cords of the fiber link are often very short. If the dead zones are too long, some connectors may be missed and will not be identified by the technicians, which makes it harder to locate a potential problem.

The attenuation dead zone (ADZ) is the minimum distance after which a consecutive non-reflective event (for example, splice) can be detected and measured. According to the Telcordia definition, the ADZ is defined as the distance between the rising edge of the pulse to the 0.5 dB deviation from a straight line fit to the backscatter level. The backscatter level is the sloping line on the trace that provides the fiber attenuation value. Thus, the attenuation dead zone specification is always larger than the event dead zone specification. 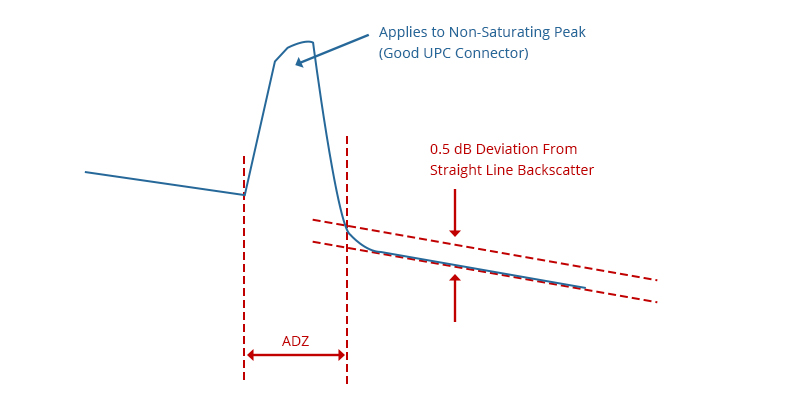 Short attenuation dead zones enable the OTDR not only to detect a consecutive event but also to return the loss of closely spaced events. For instance, the loss of a short patch cord within a network can now be known, which helps technicians to have a clear picture of what is actually inside the link.

The following figure clearly illustrates one fusion splice event following a connector pair event. The first one falls within the ADZ, and the second one falls out of the range of the ADZ. 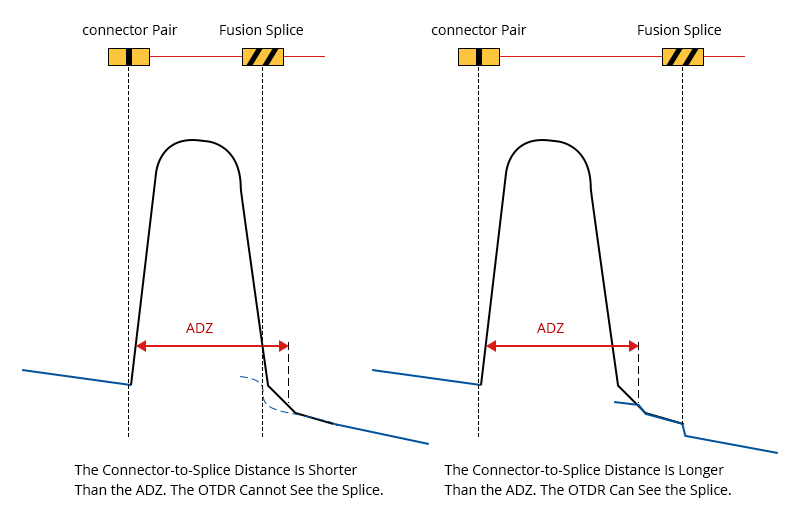 Note: In general, to avoid problems caused by the OTDR dead zone, a launch cable of sufficient length is always used when testing cables which allows the OTDR trace to settle down after the test pulse is sent into the fiber so that users can analyze the beginning of the cable they are testing.

How to Reduce Dead Zones to Get Better OTDR Performance?

There is always at least one dead zone in every fiber—where it is connected to the OTDR. The existence of dead zones is an important drawback for OTDR, especially in short-haul applications with a large number of fiber optic components. Thus, it is important to minimize the effects of dead zones wherever possible.

As mentioned above, OTDR dead zones can be reduced by using lower pulse width, but it will decrease the dynamic range. Thus, it is important to select the right pulse width for the link under test when characterizing a network or a fiber. In general, short pulse width, short dead zone and low power are used for premises fiber testing and troubleshooting to test short links where events are closely spaced, while a long pulse width, long dead zone and high power are used for long-haul fiber testing and communication to reach further distances for longer networks or high-loss networks. In addition, an OTDR Launch Box can be used to reduce the dead zones as well.

From all the above, it is necessary for users to choose appropriate configurations/setups to get the maximum OTDR performance according to the value of OTDR dead zones. However, OTDRs of different brands are designed with different minimum dead zone parameters since manufacturers use different testing conditions to measure the dead zones. Under such circumstances, it is better to choose OTDRs of big brands or companies.