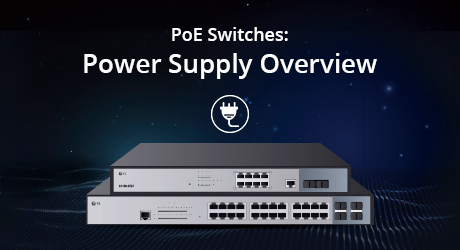 Driven by the need to connect and monitor smart IoT devices, PoE (Power over Ethernet) network switch has progressed as an increasingly efficient medium for power and data delivery over the network. It allows devices like IP phones, IP surveillance cameras, wireless LAN access points, and PoE lighting to receive power as well as data over the same Ethernet cable, which eliminates the need for separate data or power cables. Then, how does PoE switch deliver power for the devices, will PoE power damage the connected devices? Here offers detailed explanations of the PoE power supply.

PoE switch facilitates installation and management in scenarios such as home applications, WLAN construction, security protection, and so on. The PoE network switch acts as a PSE (power sourcing equipment) that supplies power to PDs (powered devices) via Ethernet cables based on different PoE standards. The following table lists the existing PoE standards and corresponding PoE power supply values.

Note that, PoE and PoE+ are the two common standards that most PoE devices on the market can support, while PoE++ IEEE 802.3bt standard is the newest one released for smart building and IoT. Since the PoE++ technology is not mature enough, only a few vendors' products support it at present, such as FS S5860-24XB-U switch.

To understand the working principles of PoE power supply, let's take the PoE network switch as an example to see its working process, PoE supply mode, and PoE distance for powering.

After connecting a PD to a PoE Ethernet switch, it works in the following procedures:

Detection of PDs: This is the first step for the PoE switch to check whether the device is a true PD or not. The PoE powered switch sends a detection voltage pulse to the PD and measures the current. If it detects a valid resistance with a specified value, then the device connected to the PoE switch is confirmed as a true PD. It's worthwhile to mention that only active PoE network switches will perform this check, whereas passive PoE network switch or injector will not. The differences between active and passive PoE Switch will be further illustrated here: Active vs. Passive PoE Switch: Which Should We Choose?

Classification of PoE power supply capability: This is the second step for the switch to measure how much power the PD needs. The switch classifies the device as Class 0, 1, 2, 3, 4, 5, 6, 7, 8 types and supplies proper power when it detects a resistor.

Start to supply power: After determining the power over Ethernet class, the PoE switch will start to provide a low voltage to PD in less than 15 microseconds, which is then raised to the full 48V DC eventually.

Normal power supply: After the voltage is reached to 48V, the PoE switch provides stable and reliable 48V DC power to the PD.

Disconnection of power supply: PoE switch cuts off the power and re-enters the PD detection procedure when the following situations occur:


Therefore, it can protect the switch and PDs in the mentioned scenarios or prevent damage to non-PoE devices that are inadvertently connected to the PoE ports after the PDs are removed.

PoE power supply mode between the PSE and PDs can be divided into three different categories. Power over Ethernet switch, as a typical type of PSE, will be taken as an example to explain PoE supply mode to PDs here.

Alternative A (PoE Mode A)

Alternative B (PoE Mode B)

The PoE switch delivers power to PDs via pair 4-5 and pair 7-8. In 10BASE-T and 100BASE-T, the two pairs are not used for transmitting data. So they are called spare pairs in 10/100M PoE powering. The pair 4-5 acts as the positive polarity, while pair 7-8 acts as the negative polarity.

The main difference between Mode A vs Mode B lies in the use of PINs. The following diagram will illustrate the difference visually:

PSE that relays power through the data pairs (Mode A) is referred to as "endspan," whereas PSE that relays power through the spare pairs (Mode B) is known as "midspan." Normally speaking, compliant PSE can support Mode A, Mode B, or both, and compliant PDs support both Mode A and Mode B, while compatible PDs typically support Mode B only. Here provide the working scenarios between switches and IP cameras based on the two different modes.

The chart below presents the three modes in two different network situations:

Note that PoE power supply mode is decided by PSE. And both PoE switch and PoE injector can act as the PSE to send power and data to the PDs. PoE Ethernet switch, as an endspan (IEEE 802.3af refers to it as endpoint), often uses PoE mode A. PoE injector (also called midspan device) is an intermediary device between a non-PoE switch and PD. It only supports PoE mode B.

PoE can transmit 100 meters from the PoE switch to the PDs. Power is not the factor of limitation. In fact, it is the Ethernet cabling standards that limit the total length of cabling to 100 meters due to the existent signal attenuation. Generally, 100 meters is the furthest distance for powering that a PoE switch can reach. However, a PoE extender can extend the reach of Ethernet data and PoE power up to 4000 feet (1219 m).

Once the PoE system is out of power, the following steps are recommended for diagnosing the issue.

PoE technology is becoming a vital part of the digital transformation journey. Knowing PoE power supply details like the specific PoE class and PoE wattage will contribute to protecting PoE and non-PoE devices. Plus, getting familiar with common issues and solutions of PoE switch connection can avoid unwanted time and money waste when deploying PoE networks.