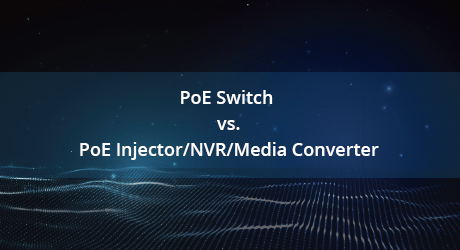 The initially published IEEE802.3af standard has divided Power over Ethernet (PoE) technology into two main power device types: power sourcing equipment (PSE) that provides power on the Ethernet cable and powered device (PD) that accepts the power. To get a better understanding of the PoE network system, it is necessary to get familiar with the PoE devices. This post will focus on the common PoE PSE devices and clarify their applicable scenarios.

PoE PD vs PSE: What Is PoE PSE?

As mentioned above, PoE PDs are PoE devices that can get powered in a PoE network system. The common PoE PDs include numerous terminal devices such as IP phones, IP cameras, wireless access points (WAPs), etc. The PoE PSE, which supplies power, however, is limited to fewer products when comparing PoE PD vs PSE. The main PSE types in use today are PoE switch, PoE injector, PoE NVR, and PoE media converter. The concrete PoE PSE type in a network is chosen based on the infrastructure and the number of PDs which will be connected to. In addition, PoE splitter is also commonly used as an intermediary device to supply power in the PoE network even though it does not belong to the PoE PSE device.

What Is PoE Switch？

PoE network switch or Power over Ethernet switch is a network switch that has PoE injection built-in. Therefore it can transmit both data and power over one Ethernet cable to the PD directly connected to it. Learn more about PoE switch at What Is a PoE Switch and How Does It Work?

What Is PoE Injector?

For adding PoE to regular non-PoE network links, a PoE injector is used. It injects power to data that is coming from a non-PoE switch and delivers both the power and data to the PD through an Ethernet cable. Learn more about PoE injector at What Is a PoE Injector and How to Use It?

What Is PoE NVR?

PoE NVR, short for PoE network video recorder, is an NVR that has PoE injection built-in. Mostly used in the IP video surveillance system, it is responsible to encode and process the video data at the IP video cameras, and record it for storage and remote viewing. Like a PoE switch, PoE NVR can also deliver power to IP video cameras through Ethernet cables, simplifying the cabling and installation of PoE-based wired surveillance cameras.

What Is PoE Media Converter？

PoE media converter is a device that not only connects fiber cabling to copper network but also provides PoE power to PoE compliant devices such as IP cameras and VoIP phones. It is an ideal way to extend network distances over fiber optic cabling to PoE PDs. Learn more about PoE media converter at Understanding Power Over Ethernet (PoE) Media Converter.

What Is PoE Splitter？

The PoE splitter can also supply power, but it delivers power to a non-PoE terminal device by splitting power from the data and feeding it to the non-PoE device through its power supply cable. It is used for deploying remote non-PoE devices with no nearby AC outlets. Learn more about PoE splitter at What Is PoE Splitter and How Does It Work?

Among the above mentioned four PoE PSE devices, the PoE network switch is now the most popular one. Due to its benefits of high-efficiency and cost-saving, PoE switches are often the top choice when people plan to set up PoE networks for homes, offices, etc. However, PoE injector, PoE NVR, and PoE media converter are also commonly applied in PoE networks to meet customers’ various needs.

Before PoE switches become widespread, the non-PoE switch is commonly used in home and office networks. What will you do when you need to add a few PoE compatible PDs in these networks? In this case, you do not have to abandon your existing non-PoE switch and buy a PoE-capable one. Some PoE injectors can be simply implemented for each PD to make your non-PoE switch work with the PDs. without the headache of upgrading your switches. However, it should be noted that PoE injectors are only suitable for PoE networks with only a few PDs. If there are dozens of PDs, the PoE switch is a better choice.

PoE Switch vs. PoE NVR: When to Use a PoE NVR?

Like the PoE switch, a PoE NVR can also power up the IP cameras in the IP surveillance system. Therefore, it acts both as the recorder and the PoE switch, eliminating the traditionally used separate PoE switch. However, PoE NVRs in the market often lack full management features of the PoE switch, including PoE control and monitoring, SNMP, etc. A PoE NVR is ideal for home and small-business users who need minimal network administration.

Power over Ethernet (PoE) technology is expected to expand in the future due to the demand for ease of installation and newly ratified standards designed to support more smart devices. Therefore, it is necessary for us to have a better understanding of all the above PoE PSE devices and the PoE splitter, especially when we need to select and buy products for building up PoE networks.