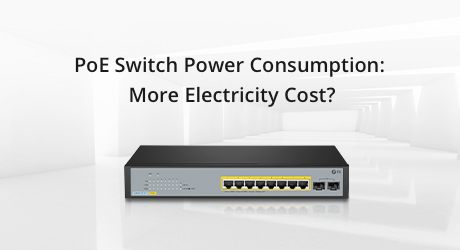 What Are the Factors That Affect Power Consumption of PoE Switch?

PoE standard is an important factor that will affect power consumption. Because PoE, PoE+, PoE++ are different PoE standards, and they deliver different power to the PDs. It's suggested that you'd better make sure that your PoE switch can support the power that your PDs require.

The following table shows the specifications of different PoE standards. And for more information, please refer to PoE vs PoE+ vs PoE++ Switch: How to Choose.

The power budget is another factor that affects the power consumption of the PoE switch. Some managed PoE network switches used in large enterprise environments may up to 400W power budget, but for a home network, it's wise to use a basic unmanaged PoE switch with just 60W power budget.

How Can I Reduce the Power Consumption of PoE Switch?

Energy Efficient Ethernet, short for EEE, is a technology defined as IEEE 802.3az to reduce switch power consumption during periods of low network traffic, aiming to reduce power consumption by more than 50 percent while remaining fully compatible with existing devices. It is also sometimes known as Green Ethernet. In addition to the link load power savings of Energy-Efficient Ethernet, Green Ethernet works in one of two ways. To begin with, it detects link status, allowing each port on the switch to power down into a standby state when a connected device is not active. Second, it detects cable length and adjusts the power used for transmission accordingly. Note that you have to make sure that the device port and connecting device must support 802.3az EEE when choosing a PoE switch.

Although the PoE switch is a little more expensive on the surface -- with increased equipment and power costs -- but overall, the increased productivity brought by the PoE switch outweighs the increased power costs. Because PoE network switch simplifies installation and maintenance costs. Users don't need to purchase and install additional electrical wires and outlets. In addition, good PoE switches also enable a simple network management protocol (SNMP), which provides a simpler way to supervise and manage the switch.

As a result, it's shortsighted to pay attention to only the increased power costs when choosing the right PoE switch. Given the advantages of better integration of applications, boosted productivity and free up IT resources, your wise choice of PoE switch will be beneficial to soften the blow of a higher energy bill.

FS PoE Swich: A Good Choice for A Cost-Effective Network