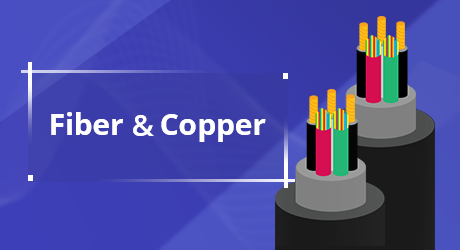 PoE is an ideal technology for home and enterprise use, enabling a single cable to provide both data connection and electric power to devices such as IP cameras, WIFI access points, and optical network terminals. However, PoE cabling system is limited in its distance, as well as other drawbacks such as power availability and device placement. How to break through the limitation of a 100-meter distance? This post will reveal the solutions.

IoT, smart homes, IP security systems, and digital signs are all applications benefiting from PoE technology. More and more people or businesses in large campuses or hotels are using PoE nowadays, however, the transmission distance is impossible to meet the further requirements for potential users, thus new cabling solutions are needed for extending PoE distance.

PoE application is often done over an unshielded twisted-pair cabling system. Since PoE technology was introduced to pass electric power along with data, new PoE standards have been ratified over the years to meet the need for a higher power, which allows more power-hungry devices to get powered. For example, the latest 100W PoE standard IEEE 802.3bt enables nearly 100W of electricity carried over a twisted pair cable. Uniforturnity, PoE over twisted copper cables still shows its limitation on a 100-meter distance between the power sourcing equipment (PSE) and powered device (PD). But be aware it is not always the same maximum cable length for different applications. The actual distance that you can power a device can be shortened by the voltage of the power supply, the quality of the cable, and other factors.

In a typical PoE network with copper cabling, a PoE switch is connected to an IP camera via a twisted copper cable. The IP camera must be located within 100 meters of the PoE switch.

When the Ethernet switch features no PoE function but has a need to support PDs, PoE injector as midspan can be added into the link, converting AC into DC so as to meet the power needs for PDs. But note that using midspan PoE injector will not extend the distance.

Evidently, if we do not use other long-range technologies, the transmission distance will still be limited by the copper cabling. To break off the 100-meter distance limitation by copper cabling, midspan devices such as PoE extender or media converter are added into the link.

PoE extenders: An extender can extend PoE devices such as IP cameras, VoIP telephone, wireless access points up to 100 meters from one to another. Multiple extenders can be added every 100 meters to acquire longer distances. The specific extended distance and the number of PoE extenders are varied from different vendors to models.

Media converter: Media converter is a popular solution for extending an existing copper link by the transition from copper cable to fiber cable. Generally in a copper network, it is used in pairs to insert a fiber segment. As shown in the figure below, a copper to fiber media converter is added near the Ethernet switch, which can extend link over greater distances with the fiber optic cable. The PoE media converter provides fiber distance extension to the PD IP camera. Also, it can be AC/DC powered and power the devices via copper cabling.

Traditionally, Ethernet copper cable provides functions that fiber cables can not supply: they are able to transmit power and data over a single cable while fiber is acknowledged to all with its ability to carry data over a long distance. But the emergence of powered fiber cable changes all of this.

Powered fiber cable can not exactly be described as power over fiber. It can be referred to as hybrid copper-fiber cable, which more accurately indicates that fiber and copper are combined together in a single cable for both data and power delivery. The main features of powered fiber cable are its long transmission distance, and the separate conductors. These copper and fiber hybrid cables are not limited to 100 meters and power is delivered over separate, large copper conductors. 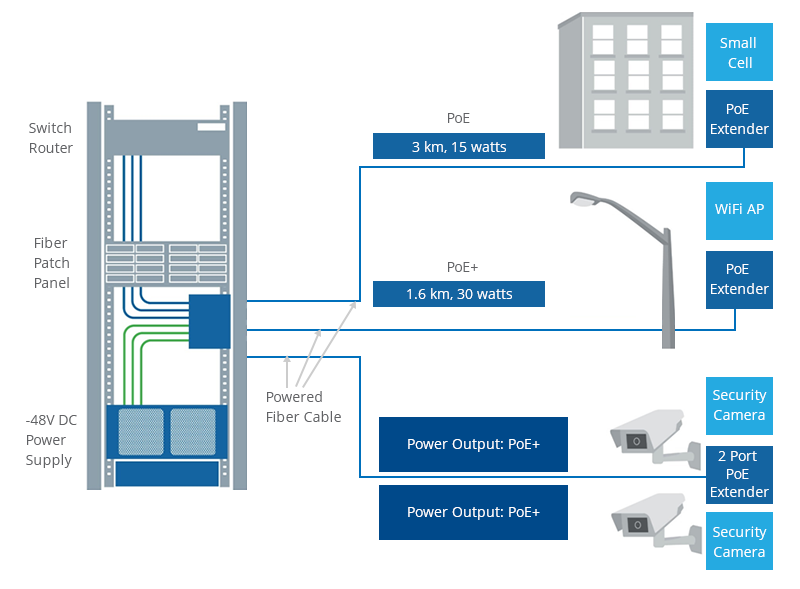 Which one is better when faced with the dilemma of choosing copper cables or powered fiber cabling? The following elements are to be considered:

Flexibility: Compared with PoE with copper cabling, the powered fiber cabling system is more flexible. With powered fiber optic cable serving as an extension cord carrying power and data, the powered devices can be deployed at the locations where they can play their best rather than where power is available.

Installation and management: Different from the copper cabling system using media converter or other devices to extend PoE distances, fiber and copper are combined in a single one cable construction. The hybrid construction reduces the number of cables you will need to deploy, making the installation and management easier with one only cable, instead of two for power and data separately.

Time and Cost: The hybrid fiber-copper cable design eliminates the cost for low-voltage power to each location and cost for extra separate power and power cables in copper cable systems. Less labor cost and installation time are needed to complete a PoE network with powered fiber cables.

Availability: Though powered fiber cables are not new things in the communication field, the hardware devices do not evolve at a pace, which may bring challenges to the powered fiber cabling. For example, there may be few security cameras equipped with optical fiber ports, thus deploying PoE in this application will require a PoE media converter. Especially in those applications including multiple powered devices, it can be very inconvenient.

The Future of PoE and Powered Fiber Cables

Today’s life is smarter than ever before, the cabling system is bound to develop in order to support the high efficiency and interoperability needed. Powered fiber cable system as a solution for extending PoE, caters to the need for multiple devices at a single point in a large coverage area. 5G active antenna systems, IoT devices, smart cities, LED lighting, surveillance systems, etc. will be the applications where powered fiber and PoE are widely used.