FS CommunityKnowledge CenterPPPoE vs DHCP: What Is the Difference?

PPPoE vs DHCP: What Is the Difference?

PPPoE vs DHCP are not relevant items and the debate between them lasts for a long time: PPPoE or Point-to-Point Protocol over Ethernet is commonly used to connect to an ISP while DHCP or Dynamic Host Configuration Protocol is a protocol for obtaining IP addresses to clients computer. So which is better? Should we use DHCP over PPPoE or vice versa. This article will walk you through PPPoE vs DHCP and to find out the answer all by yourself.

PPPoE vs DHCP: What Is PPPoE?

PPPoE is a network protocol used to encapsulate PPP (Point-to-Point Protocol) frames inside Ethernet frames. It combines the PPP that owns the function of authentication and encryption, and the Ethernet protocol that can support multiple users in a LAN. Usually, a PPPoE architecture is made up of PPPoE clients, PPPoE servers, hosts and ADSL modems, etc. 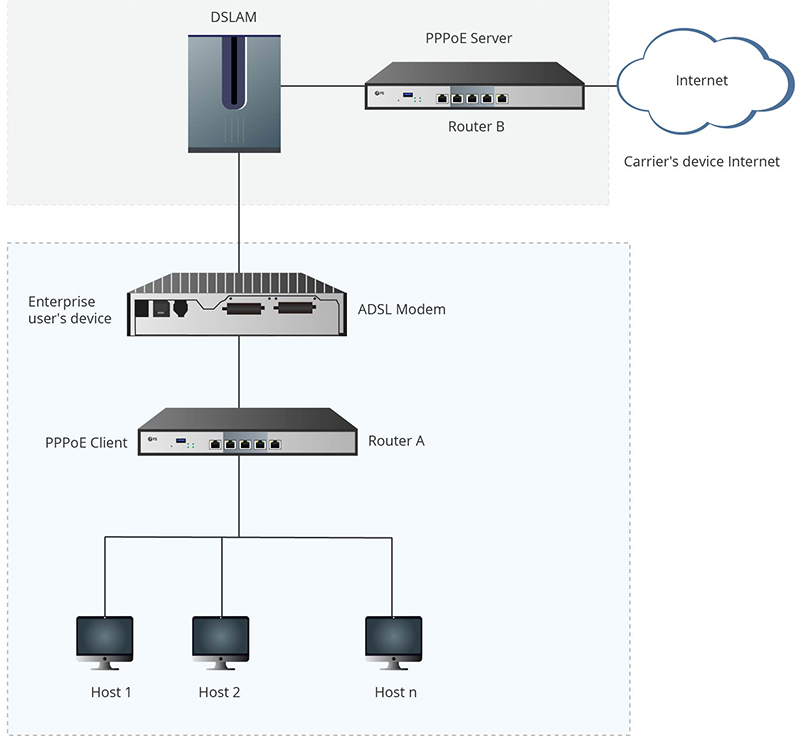 Using PPPoE, subscribers can dial from one router (PPPoE client) to another (PPPoE server) over the BRAS (Broadband Remote Access Server), then establish a point-to-point connection and transmit data packets over the connection. To employ PPPoE, you need a username and a password provided by your ISP, which you use to dial your ISP and establish a connection. But in today’s networks, with modems incorporated into the connection, you can simply set your username and password only once and your modem can automatically connect to the network whenever you turn it on.

PPPoE is what lets your computer talk to your modem over an Ethernet network. Dynamic and static IP addresses are related concepts. Typically, your needs an IP address in order to connect to the Internet. If you have a static IP address, it means there's an IP address reserved for you, and no matter how many times you connect and disconnect, you'll always get that same address. If you have a dynamic IP address, it means that someone is going to assign you an IP address (usually your ISP), and usually they'll have a pool of IP addresses set aside, and will just give you a random one from that pool. That means when you disconnect and reconnect, you might get the same IP address, or you might get a different one. For DHCP vs Static IP, read DHCP vs Static IP: Which One Is Better?

Since a myriad of users are sharing the same physical connection to the BRAS that routes traffic to and from broadband remote access devices on an ISP network, PPPoE can keep track of which user’s traffic should go and which user should be billed.

PPPoE vs DHCP: What Is DHCP?

DHCP is a standardized client/server network protocol that dynamically assigns IP addresses and other related configuration information to network devices. It is known that each device from a TCP/IP network should have a unique IP address to access the network. So without DHCP configuration, network admins have to configure IP addresses manually if they want to add new computers or move computers from one subnet to another. Usually, a DHCP architecture is made up of DHCP clients, DHCP servers and DHCP relay agents (often a router or switch with DHCP).

DHCP works to offer an automated way to distribute and update IP addresses and other configuration information on a network. A DHCP server provides information to a DHCP client through the exchange of a series of messages. A DHCP relay agent is used to forward DHCP packets between clients and servers when they are not on the same physical subnet.

PPPoE vs DHCP: How They Differ?

The differences between PPPoE vs DHCP can be summarized as follows:

There is not better than the other, they serve two entirely different functions, with zero overlap. Both PPPoE and DHCP are critical in connecting to the network, which works to acquire IP address. What distinguishes PPPoE vs DHCP is the methods to obtain IP. Using PPPoE, you have to configure a username and password first, which will make authentication next time you turn on the network to acquire an IP. As for DHCP, the IP will be assigned automatically to you without authentication.