Among the transceivers that are capable of handling 100G traffic, the compact QSFP28 transceiver increases data center density, with lower power consumption and price per bit, going to be the main data center form factor in 100G era. Is QSFP28 compatible with QSFP+? Can I use the QSFP+ optics on QSFP28 port? Whether it is possible to insert QSFP+ optics on QSFP28 ports to support 10G SFP+? Well, all these puzzles center on the application of the QSFP28 port on the network switch. Here we look at how the QSFP28 100G port can work at speeds other than 100Gbps. The configuration commands and hardware needed will be covered in this article illustrated with FS 100G network switches and 100G transceivers. 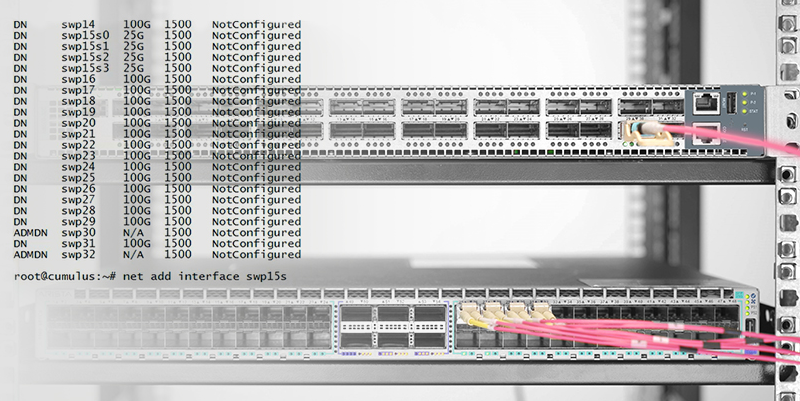 If the opposite equipment leverages 40G service speed, the 100G QSFP28 interface should speed down to the corresponding 40G and work with 40G QSFP+ optics.

If you use the QSFP transceivers in QSFP28 port, keep in mind that you have both single-mode and multimode (SR/LR) optical transceivers and twinax/AOC options that are available.

QSFP28 transceivers have the same form factor as the QSFP optical transceiver. The former has just 4 electrical lanes that can be used as a 4x 25GBE and also a 4x 10GbE, while the latter supports 40G ( 4x 10G). Here takes the 100G port on FS S5850-48S2Q4C LAN distribution switch as an example to accommodate QSFP transceiver carrying 40GbE traffic.

It is viable to run the QSFP28 port into 4x 10GbE mode using QSFP+ 40G optical transceiver when the new switch on the one side only possesses 100G ports and the existing devices on the other side only have SFP+ 10G ports.

Four SFP28 can make full use of the electrical lanes of QSFP28 to realize 100G transmission. Here illustrates with FS N8500-32C which is a 100Gb Spine/Core Layer Switch with Cumulus Linux OS.

How to Restore QSFP28 100G Ports to Default Configuration

The following commands make it possible to step back to the default mode of the QSFP28 100G port.

Disable the function by typing “no” before the command

Aside from the 100G mode, the QSFP28 100G port on the switch can also run in 40GbE, 4x 25GbE and 4x 10GbE mode, with the required hardware and configuration commands exemplified by the FS S5850 48S2Q4C. Besides, the way to get back to the default mode of the switch port is of equal importance to the process.