RJ45 vs SFP Port: Which Should Be Used to Connect Two Switches?

It is always the case to decide whether to choose a switch with access port of SFP port or RJ45 Ethernet port for 1000Mbps connections. So RJ45 port vs SFP port, which one would be better? There are some principles we could follow.

The first principle is appropriate for any cases of 1000Mbps deployment. That is, when the distance of the run is over 100 meters, SFP port with fiber SFP module must be considered instead of copper RJ45 port & copper cable. For more details, refer to 1000BASE-T Switch with SFP Ports Interconnection Methods.

When the link distance is under 100 meters, there are some other principles that we should follow when we decide to use RJ45 port or SFP port.

RJ45 vs SFP Port: Go to the Real Cases for 1000Mbps Connections

Except the principles for 1000Mbps deployment above, this part will introduce some cases to help you make better choices between RJ45 and SFP port. See some cases next.

Case description: Two Gigabit switches are needed to connect two different buildings about 300 feet (91 meters). An RJ45 vs SFP switch, which should we choose? 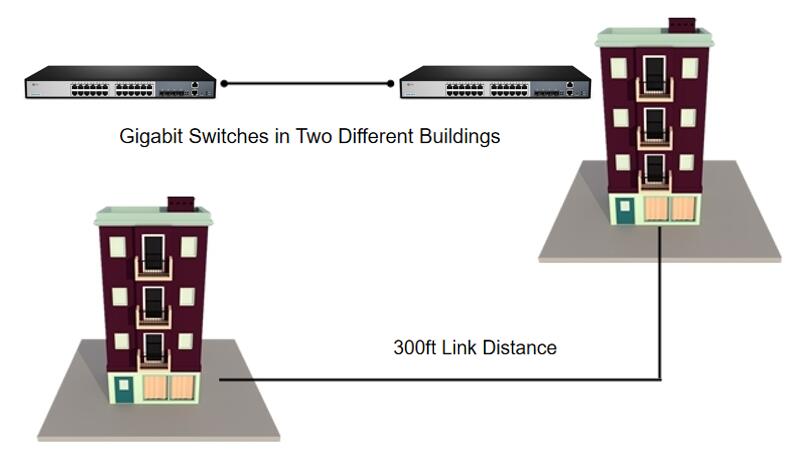 Case analysis: For cost-saving, using RJ45 switches is better to connect the two buildings. In reality, more factors should be considered since the switches are in two different buildings. Firstly, if the two buildings have separate electrical power inputs, then running copper between them could cause ground loop issues, so go fiber. Secondly, lightning strikes might matter when using copper cable across the buildings, so go fiber. If neither of the fiber or copper run is feasible, go wireless.

RJ45 vs SFP: Connections in the Racks

Case description: When building connections in the same rack, it seems SFP ports are always used instead of normal RJ45 Ethernet ports. Why use SFP ports in that situation though this solution costs a lot?

Case analysis: This is about connecting 1000Mbps switches on the same rack. SFP port is used instead of RJ45 port which can cause electrical interference. Another reason could be power consumption. When there are more than 100 links, choosing SFP ports is more power-saving than Ethernet ports.

What Is SFP Port of Gigabit Switch?