SD-WAN vs MPLS: Pros and Cons

As the demand for cloud-based applications and bandwidth requirements continue to grow and branch offices expand, some enterprises and service providers begin to deploy wide area network (WAN) services. MPLS and SD-WAN are the two most important technologies in WAN services. This post will compare MPLS and SD-WAN to give you an idea of which technology is best for you.

MPLS (Multiprotocol Label Switching) is a protocol for efficient network traffic flow between multiple locations. MPLS operates similarly on Ethernet switches and routers, sitting between layers 2 and layer 3 networks. MPLS uses labels with important information so that traffic can be delivered to its destination without the need for in-depth packet analysis by routers. This enables fast packet forwarding and routing within a network, eliminating the inefficiencies of traditional Internet routing. In the MPLS network, the MPLS switch transfers data by popping off its label and sending the packet to the next switch label in the sequence. MPLS network provides customers with a method of prioritizing traffic, thus bringing a sense of traffic predictability within the network. This allows users to leverage a single network connection for multiple applications, providing high-performance and reliable connectivity for critical application traffic.

In the SD-WAN architecture, a company can benefit from end-to-end encryption across the entire network, including the wireless WAN, the Internet as well as the private MPLS. All devices and endpoints are completely authenticated thanks to the scalable key-exchange functionality and software-defined security from cloud services in the SD-WAN architecture. 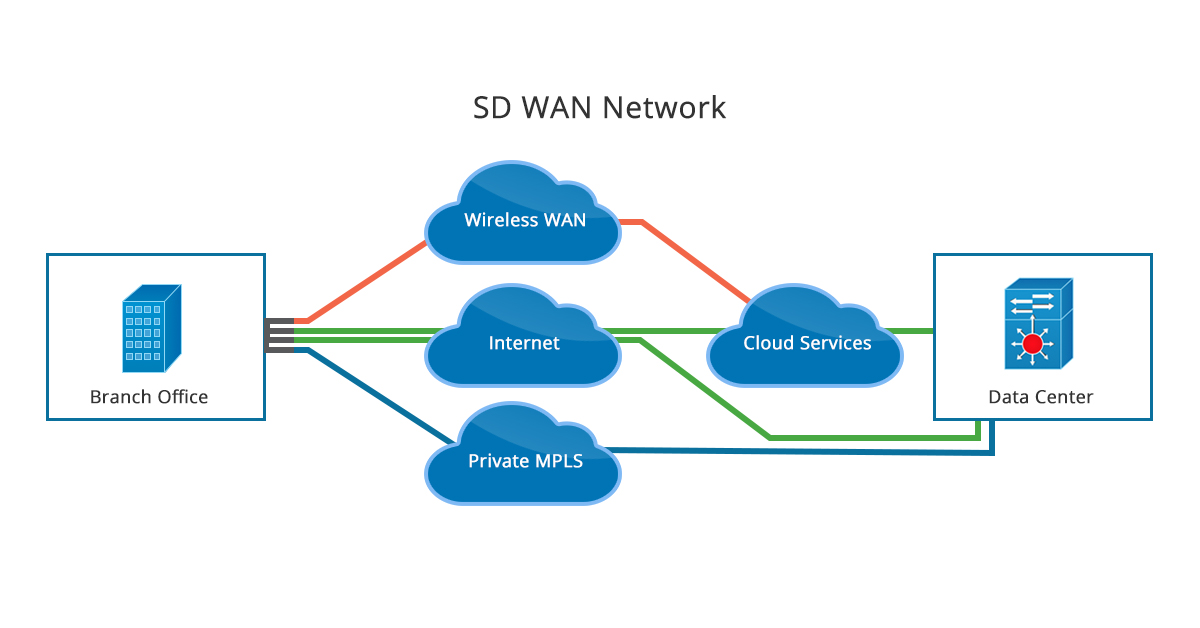 After looking through the pros and cons of SD-WAN and MPLS, the differences between SD-WAN and MPLS might be much clearer. To help you fully understand these two technologies, MPLS and SD-WAN are compared in three key areas: cost, reliability, and security.

Managing the costs of WAN links is a challenge for global enterprises. As mentioned before, the traditional MPLS networks have been proven to be very expensive, and the emerging alternatives SD-WAN presents compelling price as well as performance benefits. Because MPLS networks contain bandwidth-hungry multimedia content, such as videos and AR/VR, the high cost per megabit required for MPLS is unattainable. In contrast, SD-WAN provides optimized multi-point connectivity by distributed, private data traffic exchange and control points, effectively reducing costs.

The reliability of the traffic flowing for businesses is a key concern for enterprises. SD-WAN tends to deliver a business-class, secure, and simple cloud-enabled WAN connection with open and software-based technology. MPLS technology, on the other hand, provides reliable, high-performance connectivity over dedicated network circuits. And it can effectively avoid packet loss. The reliability of both technologies is especially important for maintaining the quality of real-time devices, such as VoIP telephony, video conferencing, or remote desktops.

MPLS does not provide built-in security functionality and any sort of analysis of the data. For MPLS connectivity, traffic needs to be inspected for malware or other vulnerabilities, which requires network firewalls and additional security features to be deployed at the endpoints of the connection. To be fair, many SD-WAN solutions suffer from the same problem. But some SD-WAN solutions include integrated security by unifying secure connectivity.

Although SD-WAN and MPLS have advantages and disadvantages in different aspects, SD-WAN can offer similar performance and reliability to dedicated MPLS circuits.

SD-WAN enables organizations to save on network investment by using relatively low-cost network links for most traffic. And SD-WAN also improves organizational WAN flexibility by eliminating the limitations of MPLS circuits. SD-WAN supports bandwidth expansion according to organizations' needs, without the delays associated with MPLS configuration. It optimizes routing so that traffic can be efficiently delivered to its destination, not limited to predefined MPLS circuit paths. And SD-WAN traffic can be routed anywhere, regardless of the geographic restriction the MPLS circuit suffers. That's why SD-WAN can replace MPLS to some extent.

Can SD-WAN and MPLS Work Together?

SD-WAN and MPLS have complementary advantages. The two technologies can work together to address some of their previous limitations. SD-WAN is an overlay technology defined by software, and MPLS sits underneath it to provide transport services.

You don't have to choose between SD-WAN or MPLS. In fact, you can use them together to provide a free network architecture to support your current and future business.