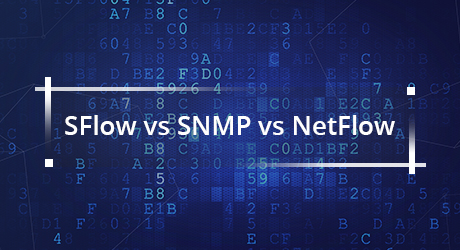 SFlow vs SNMP vs NetFlow: What Are the Differences?

Effective network monitor and traffic management are vital for ensuring peak network performance. While SFlow, NetFlow and SNMP offer different means to monitor network traffic. A question arises from time to time: SFlow vs NetFlow vs SNMP, which is the best? This article will provide some insights into the issue by addressing differences between SFlow vs NetFlow, SFlow vs SNMP and NetFlow vs SNMP.

SFlow was designed to be compatible on many different platforms of network switches and routers and uses a dedicated chip built into the hardware, which removes the burden of the CPU and memory of the router or switch. While NetFlow was a proprietary technology that is used in Cisco's Internet Operating System (IOS). It is a software-based technology.

SFlow is a pure packet sampling technology. It is almost impossible to get 100% accurate values for each host's traffic without sophisticated algorithms guessing the exact amount of session bytes. While NetFlow can be nearly 100% accurate at representing who is communicating through the device while having a very small impact on the CPU. It can track all incoming sessions on each NetFlow-enabled interface.

Figure 1: What is sFlow

Figure 2: What is NetFlow

The most notable difference of SFlow vs NetFlow is that SFlow is network layer independent and has the ability to sample everything and to access traffic from OSI layer 2-7, while NetFlow is restricted to IP traffic only.

SNMP (Simple Network Management Protocol) is the basic means of gathering bandwidth and network usage data. The most common use of SNMP is monitoring the bandwidth usage of routers and switches port by port as well as monitoring device readings such as memory, CPU load, etc. SNMP is commonly recommended for most standard situations since it does not support the differentiation of traffic by service/ protocol. SNMP is proved to be a very popular network management protocol, mainly being used for network monitoring. Regarding performance management on routers/switches, especially in a multiprotocol case, a layer independent SFlow should be the choice to collect, monitor and analyze data traffic.

NetFlow emerges as a more compact protocol than SNMP that scales better for performance collection and network traffic management. A couple of big differences between SNMP vs NetFlow are:

SFlow vs SNMP vs NetFlow: Which Do You Prefer?

SFlow vs NetFlow vs SNMP, the differences are hence clear: SNMP for standard network monitoring whereas SFlow/NetFlow for high traffic network traffic collection, monitoring and analysis. As for SFlow vs NetFlow, the former is better in the multiprotocol network while the latter is better for IP based traffic that demands improved accuracy and scalability. Vendors on the market are shipping out switches that support sFlow, NetFlow and SNMP, which is a wise choice to save investment.

How to View the DDM Information of Optical Transceiver via SNMP?