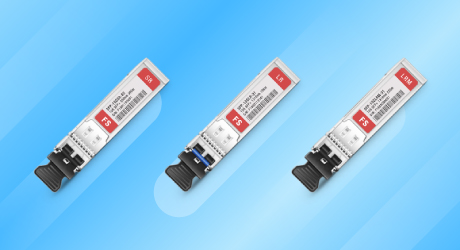 The SFP-10G-SR is a 10GBASE-SR SP+ module, which can reach up to 300 meters matched with OM3 Multimode Fiber (MMF), known as the lowest-cost, lowest-power modules implemented with a VCSEL.

The SFP-10G-LR is a 10GBASE-LR SP+ module that adopts Distributed Feedback Laser (DFB). It operates at a nominal wavelength of 1310nm and can reach up to 10 km over Single Mode Fiber (SMF). It is used in wiring buildings on a large campus or even setting up a Metro Area Network (MAN).

The SFP-10G-LRM is a 10GBASE-LRM Module that supports link lengths of 220m on standard Fiber Distributed Data Interface (FDDI) grade multimode fiber. To ensure that specifications are met over FDDI-grade, OM1 and OM2 fibers, the transmitter should be coupled through a mode conditioning patch cord. No mode conditioning patch cord is required for applications over OM3 or OM4.

Let us make a comparison of the similarity and differences, which will help you choose the right 10G SFP+ module depending on your application.

SFP-10G-SR transceivers and SFP-10G-LRM transceivers both support multimode fiber transmission. The former supports 300m over OM3 cable and 400m over OM4 cable while the latter supports 200m over OM3 or OM4 cable. Normally, when the transmission distance is less than 300 meters, SFP-10G-SR is recommended. However, if you have other requirements, for example, 200m transmission with modal bandwidth of 500 MHz km, then an SFP-10G-LRM transceiver is necessary. For more subtle differences, refer to the following chart:

For single mode transmission within 300 meters, choosing SFP-10G-LRM is an economical solution. For 2-10km transmission, the SFP-10G-LR is the only option.