FS CommunityKnowledge CenterShielded vs Unshielded Cat6a: How to Choose?

Shielded vs Unshielded Cat6a: How to Choose?

The move to Cat6a twisted-pair copper cabling has been driven by several factors, including the support for 10GbE networks, Power over Ethernet (PoE) adoptions, and wireless access points (APs) applications. Cat6a cables are gaining popularity as users are demanding higher bandwidth and better performance. Shielded vs. unshielded Cat6a, how to choose these two Cat6 network cable types? What are the differences between Cat6a shielded vs Cat6a unshielded?

Cat6a Cable: The Now and Future for 10G Cabling

Cat6a cable, aka Category 6a cable, is capable of supporting data transfer rates of up to 10Gbps at a maximum bandwidth of 500MHz. Cat6a patch cable has additional and tighter twists with additional insulation to reduce crosstalk. Backward compatible with Cat6 Cable & Cat5e Cable. (Speeds are limited and will perform to the lowest category cable or connector that is installed in the link.)

Cat6a is becoming a cost-effective solution as it is seen as a future-proof cable solution. If the planned lifetime of a new cabling system is five or more years, the Cat6a cabling solution should be considered as an option. If it is ten years or more, adopting Cat6a definitely appears to be the favored solution, which is recommended for new installations in education, healthcare, etc., supporting wireless systems that rely on 10Gig and provide enhanced performance for PoE. 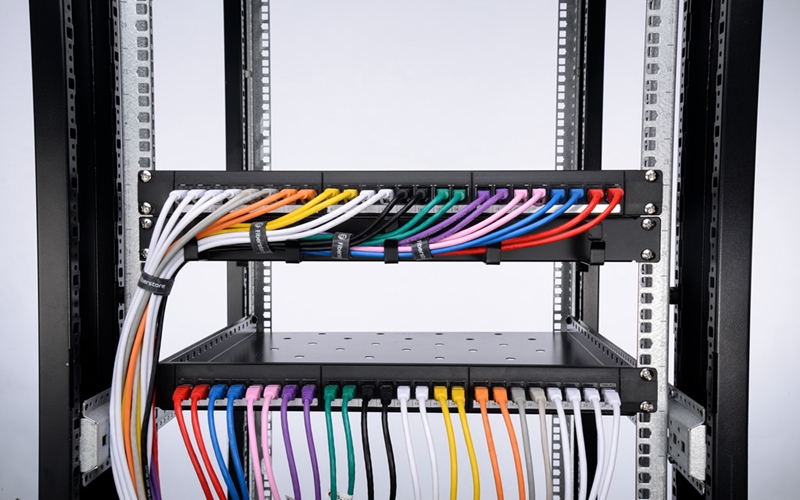 Cat6a Shielded vs. Unshielded: What Are the Differences?

Cat6a unshielded twisted pair cables are twisted into 4 sets of pairs. Each bare copper conductor is insulated and color-coded. Each bundle of Cat6a unshielded cables is bundled under an overall jacket such as PVC, and each pair of cables has a different twist rate in order to minimize crosstalk within the cable. Cat6a UTP cable is simple to terminate since no shielding and the drain wire are involved, which will reduce the termination time and cost.

According to the ISO/IEC standards, the first letter shows the type of overall shield while the latter points to the type of shielding on each pair. For example, F/UTP, "F" describes the overall shielding type, "U" indicates the shielding of the pairs, "TP" means the twisted pairs. Explore more about Cat6a shielding from the chart below:

Cat6a Shielded vs. Unshielded Cable: How to Make Your Choice?

When choosing Ethernet cables for your home or business network, evaluate the environment & cost to select the appropriate shielded or unshielded cables that meet your network needs.

In homes or small businesses, unshielded Cat6a cables usually work fine unless your home or office sits near power lines or is stuffed with appliances. Typically, there isn't too much interference around a home or small business environment to require shielded Ethernet cables. In more complicated environments for larger businesses, such as those with a lot of heavy machinery, elevators, and fluorescent lights that may generate more intense EMI, it's advisable to use shielded Cat6a cables, which won't reduce speed and data transmission quality. Generators, air conditioners, and printers can also cause EMI. Therefore, shielded twisted pair cables that fit those complex environments are normally regarded as an excellent choice for industrial environments and healthcare facilities.

When weighing shielded vs. unshielded Cat6a cables, expenses won't be neglected. Cat6a shielded cabling is more expensive than its unshielded alternative and more difficult to install; it's stiffer, making it less flexible. Cat6a unshielded cabling, on the other hand, is cheaper to purchase, more flexible, easier to install, and doesn't require grounding. Cost isn't just the price of the cable—it may also take form in the value of the speed and security of your network, which makes shielded cable seem more like a bargain.

Do I need STP Cat6a cable? If one or more of the following common scenarios applies, then the shielded cable is suggested:


To sum it up, the decision between Cat6a shielded vs. unshielded cable should be based on your cabling environments, along with the consideration of the budget. Installing high-quality Cat6a cables to get a longer life expectancy of your cabling installation, and to reduce the long-term replacement and manpower.