Before discussing simplex vs. duplex fiber optic cables, the first thing is to get a clear and deep understanding of simplex vs. duplex. Simplex and duplex are different kinds of communication channels in telecommunications and computer networking, which provide pathways to convey information. According to the ITU-T definition, a simplex circuit is one where signals can flow in only one direction at a time. One end is the transmitter, while the other is the receiver and that is not reversible. On the other hand, the full duplex system uses two fibers to communicate. This allows one fiber to transmit from point A to point B while the other fiber transmits from B to A. Therefore, both ends of a full-duplex system have both transmitters and receivers. Unlike simplex, duplex can be divided into half duplex and full duplex. Half duplex means a communication channel that data can be transmitted in both directions on a signal carrier but not simultaneously. One end is the transmitter, while the other end is the receiver and may be reversible (this is the opposite of simplex). This makes it similar to a two-way radio. In addition, full duplex is two-way communication achieved over a physical link that has the ability to communicate in both directions simultaneously.

A simplex fiber optic cable consists of one single strand of glass of plastic fiber and one single outer jacket. Simplex fiber is most often used for applications that only require one-way data transfer. Digital data readouts, interstate highway sensor relays, and automated speed and boundary sensors (for sports application) are all great uses of simplex fiber optic cable. In simplex fiber optic network, there are available in simplex single mode and simplex multimode fiber optic cable (eg: 62.5/125 OM1 fiber and 50/125 OM2 fiber). Single mode simplex fiber patch cable is a great option for setting up a cable network that will require data to travel in one direction over long distances. Since this simplex optical fiber cable only carries one ray of light at a time, it’s better for long-distance transmissions. The simplex multimode fiber has a larger diameter core that effectively allows multiple modes of light to propagate. The number of light reflection is created due to a larger diameter. The core of a single mode simplex optic patch cord is 8 to 10 microns, while a multimode simplex optic patch cord is either 50 or 62.5 microns. More data passes through the multimode fiber at a given point in time. The quality of the signal is reduced over long distances due to high dispersion and attenuation rate with this type of fiber. Multimode fiber is used for short distance data transmission purposes. 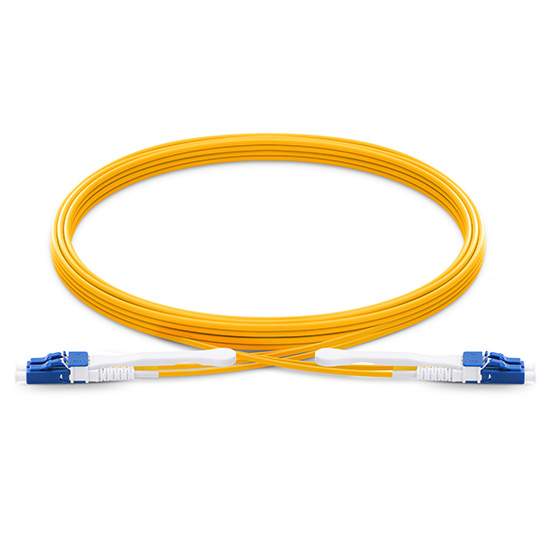 In the full duplex fiber optic cables, the data is transferred in two different directions simultaneously on a single carrier at the same time. An example is a telephone IP service where people at both ends of a call can speak and be heard by each other at the same time because there are two communication paths between them, thus using the full duplex mode can increase the efficiency of communication.

How to Choose Simplex and Duplex Fiber Optic Cables?

Single mode and multimode simplex optic patch cords can be used for applications that only require one-way data transfer. They are usually used to accomplish connectivity between two BiDi transceivers, which is usually designed with LC simplex single mode fiber to fit the optical interface of the BiDi SFP/ SFP+ optics and operating wavelength. In addition, simplex BiDi WDM Mux/DeMux is designed for use in single strand fiber transmission. So it also needs the simplex fiber cable to combine and separate wavelengths. In addition to these equipments, there are so many other components associated with simplex fiber solution, such as simplex PLC (Planar Lightwave Circuit) splitters, OADM (Optical Add Drop Multiplexer) and other simplex fiber products. As for duplex fiber optic cables, they are usually used in standard optical transceivers, such as SFP, 10G SFP+, 40G QSFP+ and 100G QSFP 28 (only LC duplex fiber cables can be used for long distance, such as 40G-LR4 and 100G-LR4). When the distance between two device is too long, duplex fiber is also used for interconnector or cross connector between fiber optic transceivers and MPO/MTP cassettes.