For the G.652 divisions, the G.652.A and G.652.B fibers are designed to have a zero-dispersion wavelength near 1310nm—optimal for operation in the 1310nm band. Due to the water peak nature, both of them are not suitable for Wavelength Division Multiplexing (WDM) applications. The more advanced variants G.652.C and G.652.D fibers have eliminated the water peak for full spectrum operation, allowing them to be applied in the wavelength region between 1310nm and 1625nm to support Coarse Wavelength Division Multiplexed (CWDM) transmission. Here is a specification table of the four G.652 variants.

G.655 standard can be divided into G.655.A, G.655.B, G.655.C, G.655.D, and G.655.E five variants, among which the G.655 C/D/E are commonly-used ones. G.655 single mode fiber is known as Non Zero Dispersion-shifted Fiber (NZDSF) on account of the dispersion at the wavelength of 1550nm—close to zero but not zero yet. There are two types of NZDSF: (-D) NZDSF and (+D) NZDSF, which stand for a negative and positive slope versus wavelength respectively.

The G.655 fiber has a small, controlled amount of chromatic dispersion in the C-band (1530-1565nm), where amplifiers work best, and has a larger core area than G.652 fiber. As an improved dispersion-shifted fiber, G.655 can suppress four-wave mixing and other nonlinear effects. Therefore, G.655 single mode fiber that supports longer distances with higher capacity can meet the requirements of Dense Wavelength Division Multiplexed (DWDM) transmission. 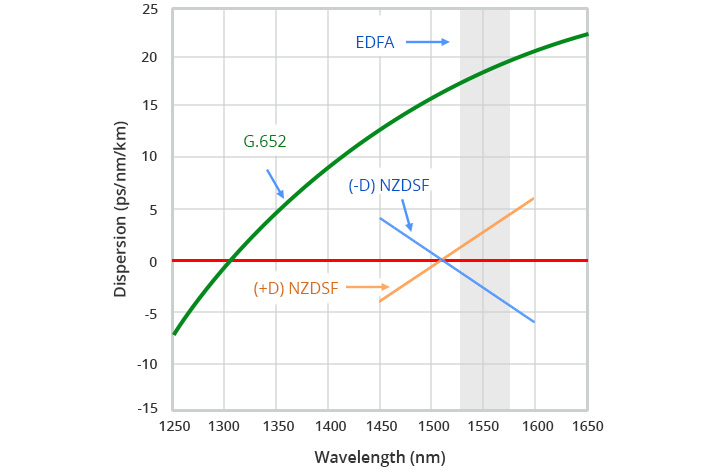 Here is a specification table of the three frequently-used G.655 variants.

G.652 standard is designed for LAN, MAN, access networks and CWDM transmission. CWDM is an economically sensible option, often used for short-haul applications on G.652 fiber cables, where signal amplification is not necessary. G.655 is the second most common fiber type in terrestrial networks and has been widely deployed in long-haul network and DWDM transmission. The key value position for this fiber type was low dispersion including Chromatic Dispersion and Polarization Mode Dispersion (PMD) when deployment.

The selection of a single mode fiber optic cable will depend on your needs. The G.652 fiber and its posterior evolution version G.657 are low-cost fibers, standard and qualified for those that don't require speed higher than 10Gbps with short-haul distances. G.652 is recommended for this kind of case. If your desired bandwidth is higher than 10Gbps or needing to support over long distances with higher performance, G.655 can provide the better solution regardless of much higher cost. The following chart shows the applications for CWDM/DWDM of G.652 and G.655. The one with a mark indicates the standard is suitable for the application.

Different types of single mode fiber cables have their own application areas. The evolution of these optical fiber specifications has reflected the evolution of transmission system technology over the years. Choosing the right SMF for your cabling is of importance taking performance, cost, reliability, and safety into considerations. The various fiber cables with different standards will confuse the customers sometimes, Is G.652 Single Mode Fiber Your Right Choice may give you some inspirations before selecting.