FS CommunityKnowledge CenterSingle Phase vs Three Phase UPS: What’s The Difference and How to Choose?

Single Phase vs Three Phase UPS: What’s The Difference and How to Choose?

When purchasing UPS for your business or organization, many factors should be taken into consideration, among which the choice of power supply between single phase UPS and three phase UPS is the foremost one. Though both of the UPS offer consistent backup power for dealing with unexpected situations, they have different roles. Here is a brief introduction of single phase vs three phase for those who are unfamiliar with their difference.

Single phase is commonly called “residential voltage” because it is widely available in homes. For example, the microwave oven, the coffee machine, your PC in your household can be single phase devices. In different regions there is a similarity for single phase connections: It requires two wires (one voltage wire and one neutral wire) for completing the circuit. The figure below shows the current flow in single phase AC power.

Two phase is basically the same thing as single phase, which consists of AC with two wires. It is also called the split phase. The power is supplied by either one of the two 120V power circuits in loads using low power circuits such as light, television, etc. Nowadays, three phase has replaced the original two phase power systems for power transmission and utilization.

Three phase power contains either 3 live wires or 4 wires (3 phase wires and a neutral one), providing three alternating currents, separated in phase angle. The total loads are shared by the three wires. Most commercial buildings in North America use three-phase, four-wire power setups. 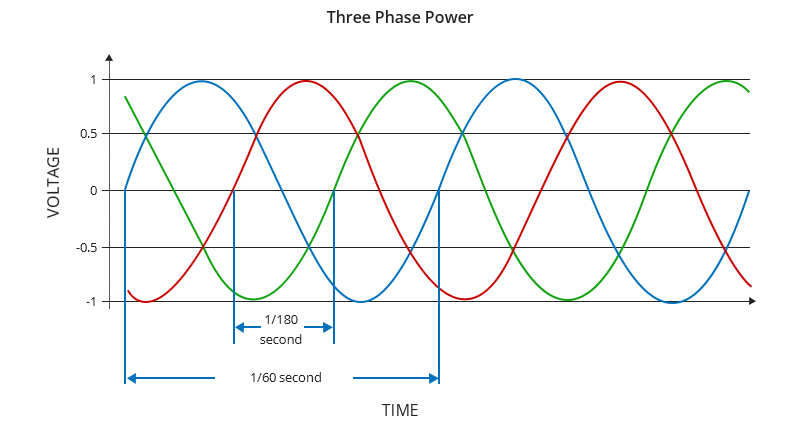 What's the Difference Between Single Phase and Three Phase UPS?

The key difference between single phase UPS and three phase UPS are the following points:

How to Choose Between Single Phase UPS and Three Phase UPS?

Whether single phase UPS system and three phase UPS system should be chosen depends on the power needs of your applications as well as what power source the equipment is connected to. You will need to confirm the load the UPS will protect and access their voltage range. Generally loads less than 20kVA can safely use the single phase UPS, or larger loads tends to use three phase UPS. Once you deicides the 3-phase UPS, the downstream loads that the UPS protects will judge whether 3/1 UPS or 3/3 UPS is the most suitable one. If you are interested in how to calculate your UPS needs, you can further refer to How to Figure Out the Required UPS Capacity?