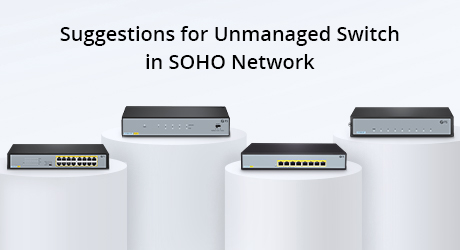 SOHO, nowadays, is becoming more and more popular in different sectors including networking circles. As the number of smaller businesses is increasing, a suitable SOHO network is essential. However, the SOHO network setup is a herculean task. So, this post will share some suggestions for SOHO networking and answer some questions or challenges you may probably meet.

What is SOHO network? A SOHO network is nothing more than two or more computers connected by a cable or by a wireless radio connection so that they can exchange information. To build a SOHO network, you will need, at the very least, a few SOHO equipments. The common SOHO network layout actually consists of three distinct but related network devices:

SOHO switch is an important item in SOHO network. The SOHO switch is responsible for connecting all your devices in your network and ensuring all your devices can see each other. Your network switch needs to be large enough to have a network port for every device. So if you have 6 computers and all 6 computers need to be directly connected to the ports, make sure your network switch has at least 8 network ports. The content of SOHO switch selection will be explained in the third part.

Router tops the list of the most basic and important requirements for SOHO network access. SOHO router is a hardware device that routes data from a local area network (LAN) to another network connection. In layman’s terms, a router isresponsible for connecting your computers to the Internet. When choosing a SOHO router, people usually tend to consider several factors, such as security, range and cost. Everyone can choose according to your needs, but if you need some professional guide, you can contact us to give you some advice. 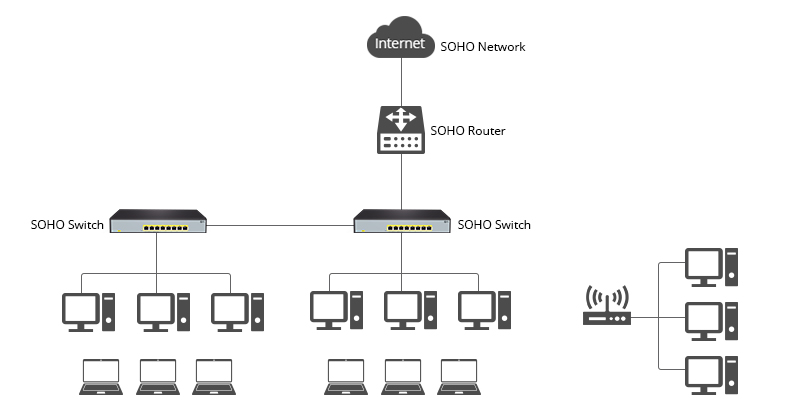 What Are SOHO Networks Facing?

Building an SOHO network is not always straightforward, and SOHO networks are facing some challenges.

In the past, network business volume was small, just browsing the web and receiving emails, etc., which did not require a high rate. But now the networks are used to do more business volume, and the speed has also increased a lot. In addition to increasing the speed of the local network, the equipment must also be selected appropriately. For instance, you need to layout a 1000Mbps speed network, you can choose a 1G switch. Moreover, on any network, the speed is restricted by the slowest component of the network. For example, a 100 Mbps switch talking to a computer with a 1000 Mbps network card is restricted to 100 Mbps. In this case, you need to upgrade the switch to a gigabit network and update the equipment at the same time, the speed will be 1000 Mbps.

Most of the devices used in a SOHO network are basically a scale down version of the exact equipment that is used for the enterprise network. Also, SOHO unmanaged switches usually tend to be of good quality and low price. That is, this will cost you less money and this can give you financial help to a certain degree. SOHO equipment should only be used on SOHO networks and not meant to be used on larger networks. However, in SMBs, SOHO unmanaged switch with a plug-and-play design is perfect, which makes for easy deployment, no technician needed.

Before designing a SOHO network, there is a range of environmental considerations to be kept in mind, especially design a wired network. Additionally, SOHO network will be limited by the amount of internet bandwidth that will be coming to the building. When you equip an SOHO unmanaged switch for setting up the SOHO networks in places that often thunder, maybe double lightning protection is a necessity to ensure the servers can continue to work normally and stable data transmission. For double lightning protection design, FS S1900-24T and S1900-16TP are already available. In the case of a wireless network, the structure and design of the building should be taken into account and things responsible for reflection or absorption of the radio waves must be taken care of.

First of all, from the perspective of management type, we can choose according to the needs of SOHO network. SOHO networks are so simple to manage that the SOHO switch itself doesn’t require any management or configuration of its own. You simply plug all the computers into the SOHO switch, and the network will take care of itself. Unmanaged switches just have the characteristics of plug-and-play and no configuration required. So unmanaged switches are very suitable for SOHO networks.

Additionally, cost is also an issue that cannot be ignored. Generally, unmanaged switch is cheaper than managed switch. Moreover, FS unmanaged switch, such as S1900-8TP, supports IEEE 802.3az which cuts down on power consumption during periods of low data activity, put the unused port into sleep mode, saving a substantial amount of power.

Last but not least, performance is also a concern. From the perspective of speed, if you need to transfer large files or do other bandwidth heavy tasks, take faster speed into consideration. You need to choose an unmanaged switch that matches your SOHO network speed. That is, if you want to lay out a 1000Mbps SOHO network, you need to equip a 1G unmanaged switch. For example, you can choose the S1900-8TP 8-port gigabit ethernet unmanaged PoE+ switch, which provides 8x 10/100/1000Mbps auto-negotiation RJ45 ports and can be used to link bandwidth to higher upstream equipment. 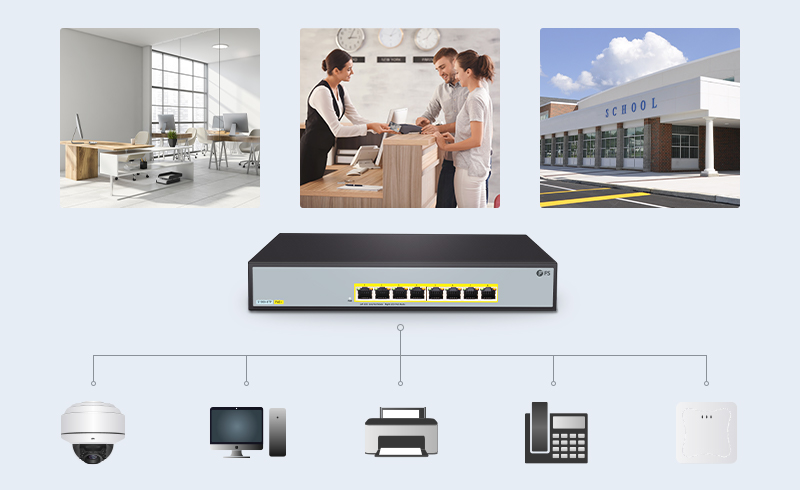 In fact, every SOHO is unique and there is no universal solution. The bottom line is to evaluate your needs and pair them with appropriate solutions. Establishing a network may be a big project. If you have any questions, you can consult the FS technical staff to explain your needs and obtain customized solutions.