Getting 100% traffic visibility of network is fundamental to business success. And implementing a network TAP is proven one of the best methods to get data from your network and into your monitoring & security tools – simply by creating permanent, in-line monitoring ports. Network TAPs are niche products designing to keep your network running smoothly and secure. Amidst the various types of network TAPs, the demand for TAP aggregation is flourishing and still on the rise. So we will focus on explaining TAP aggregation functions and benefits.

What Is TAP Aggregation?

TAP aggregation, or TAP aggregator, is an external, plug-and-play device installed directly to the network where it copies data continuously 24/7 without compromising network integrity. TAP aggregation copies data that flows from ports A to B and B to A and merge them together into one monitoring port, then it will send all the traffic out to the attached tool or monitoring device. TAP aggregation connects many network ports to one monitoring port (M:1), so that network traffic from multiple segments can be sent to a single network traffic analyzer. It can be placed between any network devices, for example, between a 10Gb Ethernet switch and a router, or a Gigabit PoE switch and a client. TAP aggregator thus provides total traffic visibility into network and facilitates optimal performance and security.

Right before TAP aggregation coming to our sight, SPAN (Switched Port Analyzer), also known as Port Mirroring, serves as the method of monitoring network traffic. With port mirroring enabled, the switch sends a copy of all network packets seen on one port (or an entire VLAN) to another port, where the packet can be analyzed. To choose between an aggregation TAP vs. SPAN is the problem that confuses many network administrators. However, TAP aggregator is superior to SPAN mirroring in at these aspects:

Aggregation TAP doesn’t require a dedicated switch port for monitoring, it frees up the monitoring port for switching traffic.

When and How to Deploy TAP Aggregation?

As a low cost, complexity-free solution, TAP aggregator allows you to see everything on the network clearly to secure your network and ensure peak performance. It’s exactly the time to implement a TAP aggregation if you value the following aspects:

Generally, TAP Aggregation can be applied to data center and carrier network to gain access to your network traffic. Let’s see how it performs in these scenarios.

In data center, TAP aggregators are used to sample egress traffic flow of DC. As shown in the figure below, by enabling the timestamp and source port label function of TAP devices, the server cluster can access the exact packet process time in each layer. From port1, port2, port3, user can distinguish the devices that the streams come from. And through T1, T2 and T3, packets forward latency of each device can be calculated. In this way, user can find out the bottleneck during packet forwarding for optimizing the network.

TAP aggregation can also be used to assist DPI (Deep Packet Inspection) in carrier networks: It is applied to forward flows of carrier at internet access point and then sends a mirrored copy of the packet flow to DPI device at the same time. The DPI device is for traffic analysis, once it detects virus on website or any illegal information, the flows will be blocked by a five elements table sent from management channel between DPI and TAP. 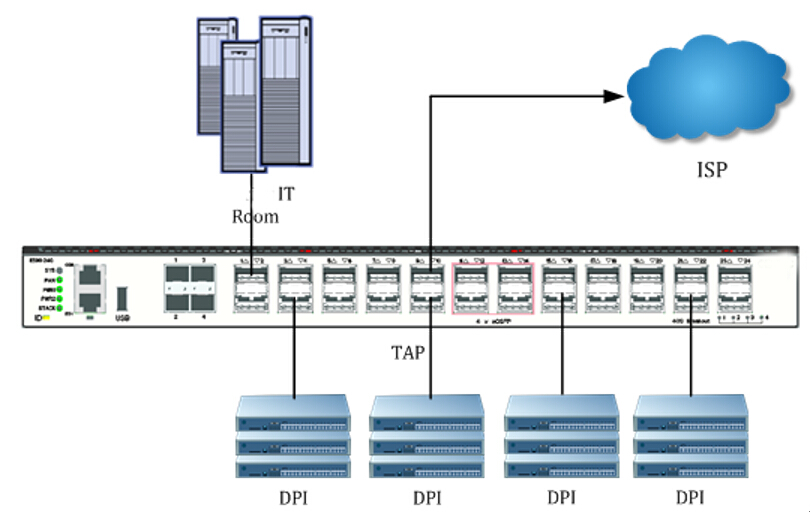 FS Network Packet Broker Solution for All Your IT Operation

Since TAP aggregator has become a mainstream method to gain network visibility and access data traffic, it’s essential to deploy it to alert any problem occurs in your system and to ensure the peak performance. Except for network TAPs, network packet brokers are also needed to invest to accomplish traffic filtering, load balancing, SSL decryption and most importantly, optimize your network security.