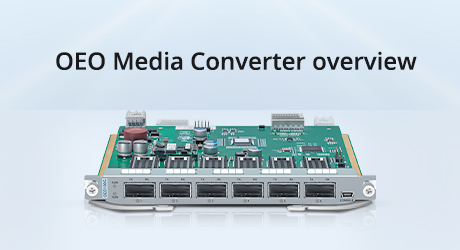 The evolution of WDM systems stemmed from a need to increase the capacity of a single fiber, and thus the network traffic volume is increasing and the demand for more network bandwidth is also on the rise. By converting incoming optical signals into the precise ITU-standard wavelengths to be multiplexed, OEO media converters are currently a key determinant of the openness of CWDM and DWDM systems. This article is mainly to introduce the OEO based WDM system. 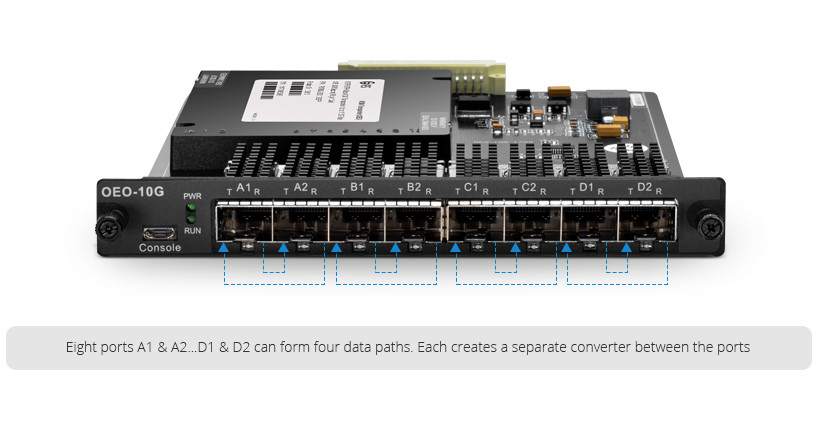 Figure 1: What Is a OEO Converter

The transponder can convert Ethernet signals into a corresponding wavelength in CWDM and DWDM network infrastructures. From left to right, the transponder receives an optical bitstream operating at one particular wavelength. And then it converts the operating wavelength of the incoming bitstream to an ITU-compliant wavelength and transmits its output into a CWDM or DWDM system. On the receiving side (right to left), the process is reversed.

OEO media converter realizes wavelength conversion based on the Optical-Electrical-Optical transformation technology. Firstly, the OEO optical transponder receives the optical signals and converts it into electrical signals through the Optical-Electrical conversion. And then, the 3R technology (re-amplifying, re-shaping and re-timing) is used to handle the signals. At last, electrical signals are modulated to the optical laser and then output. By this process, optical signal transmission distance therefore can be longer than before. As shown in the figure below, by using the media converter, the transmission distance reaches up to 40 km.

What’s the Function of Wavelength Converter?

As we all know, when adding a CWDM or DWDM Mux/Demux into a WDM network, there is a requirement to convert the optical wavelengths like 850 nm, 1310 nm and 1550 nm to CWDM or DWDM wavelengths. Then the OEO transponder comes to assist. Wavelength conversion is the most common function of the OEO media converter.

In long haul fiber optic transmission, an OEO transponder also can work as a repeater to extend network distance by converting wavelengths and amplifying optical power. The OEO converter converts the weak optical signals from the fiber into electrical signals, and regenerates or amplifies, then recovers them into strong optical signals for continuous transmission. For this reason, OEO media converter is also called OEO fiber optic repeater.

How Should We Choose OEO Media Converter?

Normally, OEO WDM transponders have various types featuring different functions. For example, the 3R function can support longer distance transmission. It can convert 1G~11.3 Gbps Ethernet signals into a corresponding wavelength in CWDM and DWDM network infrastructures. For specific needs such as easy installation & removal and slot occupation in 1U/2U/4U chassis, etc., one should choose a reliable supplier like FS with customized service provided.