SONET vs SDH vs DWDM, What Are Their Differences?

When compared with traditional SONET or SDH, the next generation of DWDM (Dense Wavelength Division Multiplexing) is seen as a simple architecture with high scalability, capacity add/drop, multiple ring terminations, multi-services, and multiple fabrics. Then, on comparison of SONET vs SDH vs DWDM, what are their differences exactly?

SONET/SDH is the dominant technology deployed in most metro and long distance networks. It refers to a group of fiber optic transmission rates that can transport digital signals with different capacities. Since their emergence from standards bodies around 1990, SDH and its variant SONET (used in North America), have tremendously enhanced the performance of telecommunications networks based on optical fibers. The basic unit of SDH is synchronous transmission module level-1(STM-1). The basic unit of SONET is Optical Carrier level-1(OC-1). The other rates OC-3,OC-12,OC-18,OC-24,OC-36,OC-48,OC-96 and OC-192 are derived from this basic rate.

TDM-based networks of PDH (Plesiochronous Digital Hierarchy) and SDH/SONET have long served as standard transport platforms for cellular traffic. PDH and SDH/SONET are optimized to deal with bulk voice circuits with maximum uptime, minimal delay and guaranteed service continuity. SDH was created to replace the PDH system for interoperability between equipment from various vendors. The signal hierarchy defined several line rates among which STM-1 (155 Mbps), STM-4 (622 Mbps), STM-16 (2.5 Gbps) and STM-64 (10 Gbps) and STM-256 (40 Gbps) happen to be widely adopted.

DWDM is considered as one of the best technologies to increase bandwidth over an existing fiber plant. It enables one to create multiple “virtual fibers” over one physical fiber. It does this by transmitting different wavelengths (or colors) of light down a bit of fiber. DWDM was initially adopted by long distance carriers because the spending in amplification, dispersion compensation, and regeneration composed most of the network equipment cost in regional and national SONET networks. DWDM became increasingly popular in metro networks when the local exchange carriers grew their networks. Other than fiber exhaustion, traffic volume is the major economic factor for deploying DWDM technology in metro networks.

DWDM operates in the range between 1530 and 1565 nm, the so-called C-band that corresponds to the low-loss window of the optical fiber. This is the range where the Erbium-Doped Fiber Amplifier (EDFA) is operative. A grid of allowable wavelengths/frequencies of operation is per ITU-T, centered in a frequency of 193.1 THz, or a wavelength of 1553.3 nm, and all sorts of frequencies spaced at multiples of 25 GHz (=0.2 nm) around that center frequency. Commercial systems might have channels at 2.5 Gbps, 10 Gbps, and 40 Gbps (in which the latter are recently becoming commercial) in addition to combinations of these in the same system. The higher the bit rate, the larger needs from the power budget meaning that the lasers must have better signal to noise figures, the amplifier spacing needs to be reduced, amplification must be higher for example, by employing two DWDM Optical Amplifiers in series. Typically 64 DWDM channels at 10 Gbps reach a maximum distance of around 1,500 km with an amplifier spacing close to 100 km. Long-distance transmission systems beyond 1,500 km and up to 4,500 km will also be commercially available using advanced and much more expensive systems.

The DWDM layer is protocol and bit rate independent, which means that it can carry ATM (Asynchronous Transfer Mode), SONET, and/or IP packets simultaneously. WDM technology may also be used in Passive Optical Networks (PONs) which are access networks in which the entire transport, switching and routing happens in optical mode. With the inclusion of recent 3R (reshape, retime, retransmit) devices, internal towards the DWDM system, circuits utilizing only DWDM equipment can now be built that may span the country. New performance monitoring capabilities happen to be built into these devices so that maintenance and repair of the link can be done. With DWDM as the transmission method, the bandwidth of the existing fiber plant is maximized.

SONET/SDH vs DWDM: Which Is Better?

The main differences between sdh and dwdm are listed below:

The need of SONET granularity is due to the presence of low-speed service demands for example DS1/DS3 and the insufficient sub-wavelength grooming within the DWDM platforms. DWDM has a goal to carry the same traffic in as few topological structures (e.g, rings) as possible. DWDM does this at the expense of allowing some visitors to traverse longer distances than it does in SONET. For any simple example, the very best SONET design may generate a bunch of topologically different OC-48 and OC-192 rings, while the most economic DWDM transport network may consist of just a single DWDM ring.

Traditionally Internet traffic runs on IP which rides on ATM and SONET/SDH or IP over SDH then to an optical layer (as shown in the figure below). The misconception that IP rides on ATM/SDH is the fact that IP traffic is small and needs to be combined with other services for cost-effective delivery. Unlike this delusion, the concept of IP over DWDM supports voice, video and data traffic and dedicates the remainder to high-speed data traffic. Elimination of layers (SONET/ATM) will ease the task of network management and will be cost effective.

As expected, the SONET scenarios have a low initial cost. When the traffic volume is low, a SONET architecture is much more economical compared to DWDM architecture. FS’s modeling indicates that when designing a SONET overlay network with OC-3, OC-12, OC-48 and Gigabit Ethernet demands so when the design requires under 4-10 OC-192 rings, a SONET network is a perfect choice.

DWDM for Now and Future

As the traffic volume grows, DWDM will eventually prevail and become the choice of the network technology. Timing of this crossover is responsive to such things as the span distances, pricing and interface density. The differences between demand types mostly are caused by the design efficiency of these two technologies’ interface cards in terms of density and price. FS’s study also shows span distances usually trigger the extra requirement for regenerators, optical amplifiers and DCMs in the routes. Long span distance has a tendency to favor a DWDM architecture because of the efficient utilization of fibers and optical bypass capabilities at intermediate nodes.

Additionally, higher fiber cost and situations in which fiber constraints are enforced will lead to more consideration for DWDM than SONET because DWDM saves a tremendous amount of fiber within the optical network. DWDM systems could be planned for a large number of channels, however, pay-as-you-grow strategy can be used and channels added based on demand in FS. The amplifier distance and overall power budget of the system needs to be calculated for the final quantity of channels right from the start. 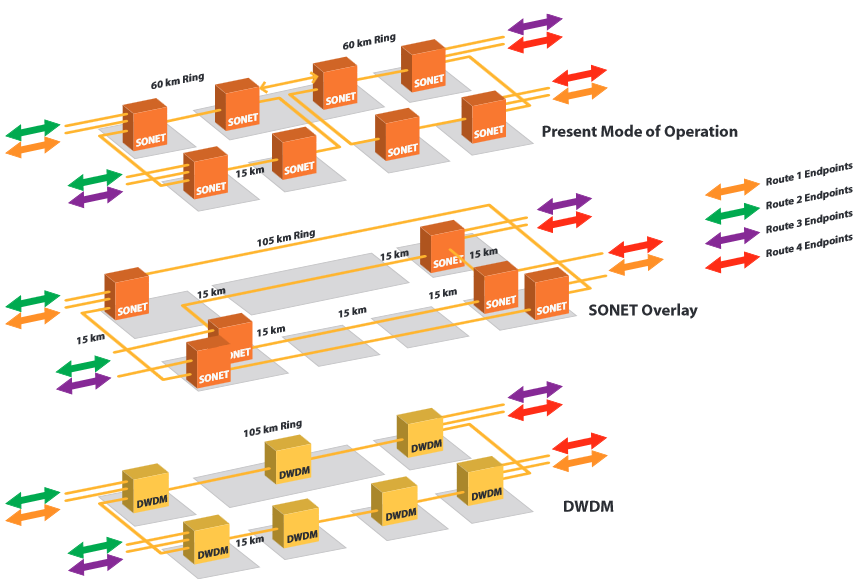 Different alternatives and their economic impact in designing exactly the same network is definitely an interesting study. SONET point-to-point performs better still. These results might not apply in all situations. However, the implication is the fact that, in large network designs, the most optimized network may not necessarily be a single architecture. One part of the network may adopt rings while another part implements point-to-point. Usually, the core part of the network will justify a DWDM architecture.