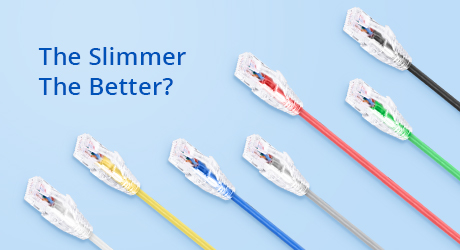 The Slimmer The Better? 4 FAQs For Using Slim Patch Cables

As the demand for information increases, data centers become more and more crowded, with more active equipment and cables. Due to its small wire diameter, slim patch cables have been widely used in data center applications. However, people still have some doubts about them. This post will list FAQs, hoping it will help you a lot.

The answer is "yes". Slim patch cable is a thin ethernat cable that is used to connect two electronic or optical devices for carrying a variety of signals. (The slim patch cable in this article refers specifically to copper patch cable.)It is critical to the operation of electronic equipment and optical equipment. The slim patch cable, a cost-effective and easy network upgrade, is 40% thinner than other Ethernet cables, lending itself to use in tighter spaces. So how to define the "slim"? Generally, we describe Ethernet wire gauge with AWG, the acronym for American Wire Gauge. Slim patch cable is commonly constructed of 28 AWG or larger, while the regular patch cable is constructed of 24AWG. If you want to know more about 28AWG cables, FS 28AWG Cat6 Ethernet Patch Cables will introduce you in detail.

Are There Any Disadvantages of Slim Patch Cable? Is It Reliable and Safe?

Everything has two sides. Similarly, slim patch cords cannot be guaranteed that there are no disadvantages. The disadvantages of slim patch cable are manifested in higher DC resistance and higher insertion loss, which cause to limit the using distance.

According to the IEEE standard, the DC link resistance of a pair of channels should be 25 ohms (Ω) or less. The new TIA 568.2-D standard recommends a 28 AWG patch cable in the channel keep the length within 15 meters to lower DC resistance within 25 Ω.

From a signal point of view, insertion loss is considered a more important performance parameter. Like DC resistance, it is affected by the size and total length of the conductor. Generally, a cable with a smaller wire diameter has more insertion loss than a cable with a larger wire diameter. Since the loss is directly related to the length of the channel, the use of slim patch cords needs to reduce the total length of the channel. For example, the 28 AWG patch cord has a derating factor of 95%, which means that it's 95% more loosy than a horizontal cable of the same length. In the case of a 90m permanent link, the longest possible channel is 96m (see the table below to combine the longest possible 28 AWG patch cord length with various permanent link lengths).

However, most users are not worried about derating. Because these thin wires are mainly deployed in the high-density wiring area of data centers, where the link length is often much less than 90 meters.

Does Slim Patch Cables Work With Power over Ethernet (PoE)?

The answer is "yes"! Power over Ethernet (PoE) is possible with slim patch cords, although the industry currently varies in terms of wattage recommendations. Today, PoE Type 2 can be supported with 28 AWG patch cords—higher wattages may be included in the future. As recommended, the transmitted power of slim patch cable is limited to less than 30W. In other words, slim patch cables can only be used in ordinary low-power PoE transmission. If it is a high-power device, using a regular patch cable is better.

When using slim cables, because of the cables' smaller size, the cables are closer, and more heat occurs. So don't bundle too many long and thin wires into a bundle to avoid overheating. For more details about deploying slim cable for PoE, you can refer to: Will 28 AWG Wire Work with Power over Ethernet (PoE) and How?

What Scenarios Can Slim Patch Cable Be Used in?

In fact, the slim patch cables can be used in all applications that require twisted-pair cabling, including PoE. For their small wire diameter, they are usually deployed in high-density environments, such as data centers and telecommunications rooms. And they allow for easier access for maintenance and improve overall network administration. It’s also important to note that 28 AWG cable cannot be used as horizontal or backbone cable – only as patch cabling to connect an endpoint device to something else. Their maximum distance is just 10 meters according to the standards.

Without sacrificing speed or reliability, FS slim patch cables are a great choice for anyone dealing with high volumes of cables. Thinner patch cables equate to better airflow without crowding and overheating . They can also enhance your network, make the most of your server room and clear up space.

Related Articles: Slim vs. Regular cat6 Cable: Which to Choose?