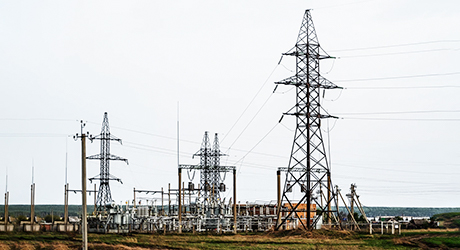 Things You Should Know About Data Center Power System

Data center power is an essential element in designing and running data centers. A simple power failure can be a big disaster causing serious impacts, especially as more and more companies are turning to colocation services and cloud solutions, the number of data centers is soaring. A reliable power supply and distribution system is the must to keep the efficiency and security of a data center and minimize the economical loss. This post is for you who want to know the power system in data centers, the reasons for power failures and the methods to cope with them.

How Power Flows in Data Centers

The power supply and distribution system is one of the most subsystems of a data center. Facilitated through different pieces of equipment, the system can be varied according to the size and scale of the data center.

There is a four-tier ranking system for determining the reliability of data center, from tier I to tier IV. Tier I is usually for small business and tier IV data center is typically utilized for enterprise corporations providing additional generating sets to achieve redundancy. The following figure will take a simplified illustration of a tier IV data center as an example to show the power system in the data center. 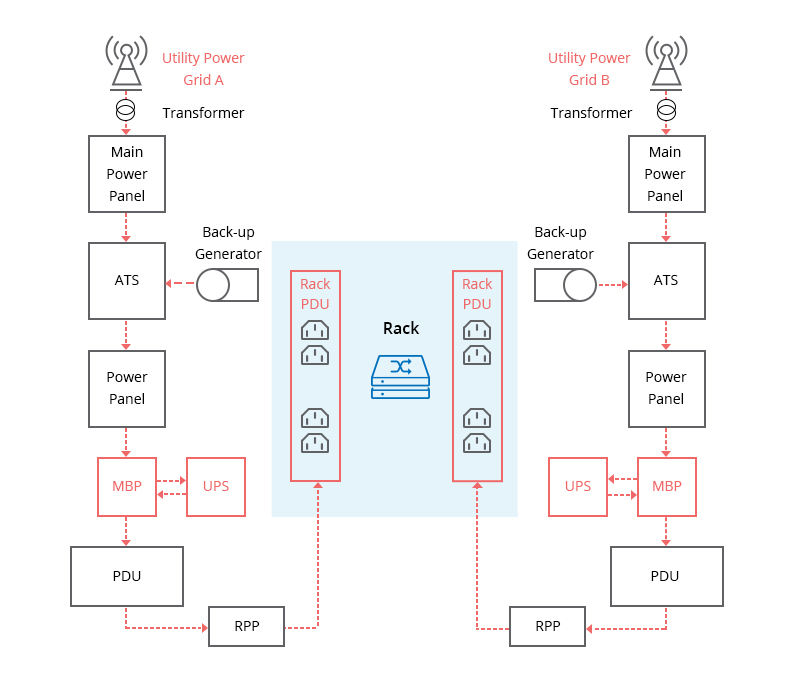 Generally, the power from the electrical utility can be extremely high. There is a transformer to reduce the high voltages down to safe levels through automatic transfer switches (ATS). Since electricity providers can not guarantee perfect power supply every time and everywhere, and the redundant access to the utility power grid is not feasible, at least one diesel or gas backup generator is connected to data centers to provide the backup power sources for supporting servers or other data center equipment. Once the power is interrupted, transfer switches will signal the backup generators to turn on so the generating power will be supplied for the data center equipment.

However, it takes a little bit of time from powering up the generator and delivering full power. Uninterruptible power supply (UPS) plays a role in bridging the time gap as a standby power source. To know more details about UPS, you can refer to What Is Uninterruptible Power Supply or UPS. Generally there is a Maintenance Bypass Panel (MBP) enabling UPS to be operated into Maintenance Bypass mode, and achieve no load interruption when power is removed from system for servicing. Ultimately, the power will be wired to power distribution unit (PDU)，which is connected to a series of remote power panels (RPPs). Then different rack PDUs are plugged in the different outlet boxes from RPPs as a part of the redundant power chain. That’s how the power supply system works.

The power system failure in the data center may occur in the form of system halt, data loss, transformer heated, damage shutdown, or anything else. These phenomenons can trigger a chain of unprecedented events resulting in great loss of the data center. So how can power failure happen in a power supply and distribution system? They can be traced back to natural factors such as thunderbolt weather or hardware failure as well as man-made disasters, among which human factors make up a large proportion of causes to power failure. Here lists some common human factors that account for power failure in data centers.

The inaccurate estimation of data center power capacities happens in the process of designing data centers. It can go to two extremes: underutilization of the power capacity or the demands exceed power supply. Overestimating capacity may result in unused capacity, which means the data center will spend the entirety of its life to support the excessive installation costs and maintenance of the equipment. While underestimating the required power capacity may cause power disruption when the power-hungry IT equipment and the power consumption grows.

The improper choice of power equipment is related to the estimation factor mentioned above. To keep up with the growing business, many data centers are deploying more and more high-density servers, which pushes the power distribution system to approach peak capacity. When underestimate or overestimate the power load, the power equipment with improper voltage value will influence the normal running of data centers. For example, a mismatch between the power voltage value of the UPS and that of the server will lead to overload and cause UPS to strip. On the other hand, sometimes customers would be misguided by the advertises by some power equipment vendors, overlooking the actual inspect of the reliability. The quality problems or inaccurate maximum performance index will impact the power distribution system.

Unreasonable power system design and construction have its pitfalls, which may trigger the hidden danger. If the design ends up multiple power equipment to a single point in the power line, it may lead to power failure due to the excessive load. For example, if there is only singe PDU connected to multiple high power components, the data center power system will stop running once the single PDU breaks down. Poor cabling may also fail the system. If the cable length is not unqualified for the requirement to keep normal equipment performance or the layout is messed up, it may cause overheating leading to the system shut down.

How to Prevent Power System Failure in Data Centers?

Since the reliability of the power system matters a lot to data centers, how can we guarantee high-quality power? Here are some suggestions on preventing power system failure in data centers.

After accurately evaluating the power capacity requirement of the data center, the time comes to the process of equipping the data center with appropriate equipment. The appropriate power system will minimize the risk of power failure. Dual power components such as double PDU are suggested to support redundancy. What’s more, considerations must be given to the harmonic currents generated by IT equipment. Isolation transformers can be applied to mitigate the effect of harmonic currents.

Daily physical inspection of the power equipment and IT equipment is the necessary process to ensure all systems are in excellent working conditions. For example, the regular maintenance of UPS and batteries are essential to minimize the possibility of power outage problems. Identify the changes in the infrastructure in case not to miss some details that will make a big difference to the entire system, reducing the amount of electrical energy used and extend equipment lifetime, so as to avoid the labor cost and the cost for changing equipment.

Making sure your data center has a strong power system is critical to facilitate the smooth operation of the business. Some of the data center power system problems may be controlled by taking some measures above. Therefore, it is important to take effective preparedness to the power system, reducing risks as low as possible, which consequently increases the competitiveness and gains more profits for the business.