For today’s enterprise campus and data center networks, the network core and aggregation layers are upgrading from 10 GbE to 40 GbE. Many applications including High-Definition (HD) video, Bring Your Own Device (BYOD), and Virtual Desktop Infrastructure (VDI) are adopted to increase the demand for higher bandwidth access networks. Therefore, Brocade has launched the ICX 7750 switch as a cost-effective and high-performance solution. This article will introduce the basic information about Brocade ICX 7750 switch and provide compatible transceiver and cable solutions for the device. 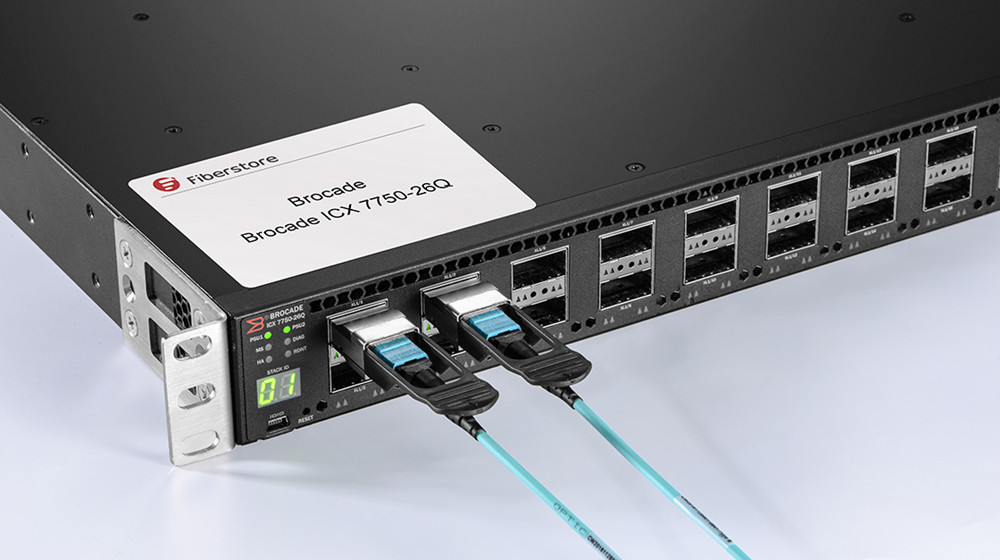 Brocade ICX 7750 is a fixed-port, high-density switch for 10/40 GbE networks. Designed for enterprise campus and data center environments, Brocade ICX 7750 is available with front-to-back or back-to-front airflow and redundant, hot-swappable power supplies and fan units in a 1U form factor. The switch can also be stacked together in a linear or ring topology. The stack ports for the uplink and downlink connections should be on the same module. Each stack is able to accommodate up to 12 switches providing the maximum stacking bandwidth of 5.76 Tbps. The distance between two staked switches relies on the type of QSFP link, and its maximum length can reach up to 10 km.

The last type is Brocade ICX 7750-26Q (shown in the following figure) constructed with a very different structure from the previous two modules. It offers 26×40 GbE QSFP+ ports that can be split into as many as 104×10 GbE SFP+ ports. 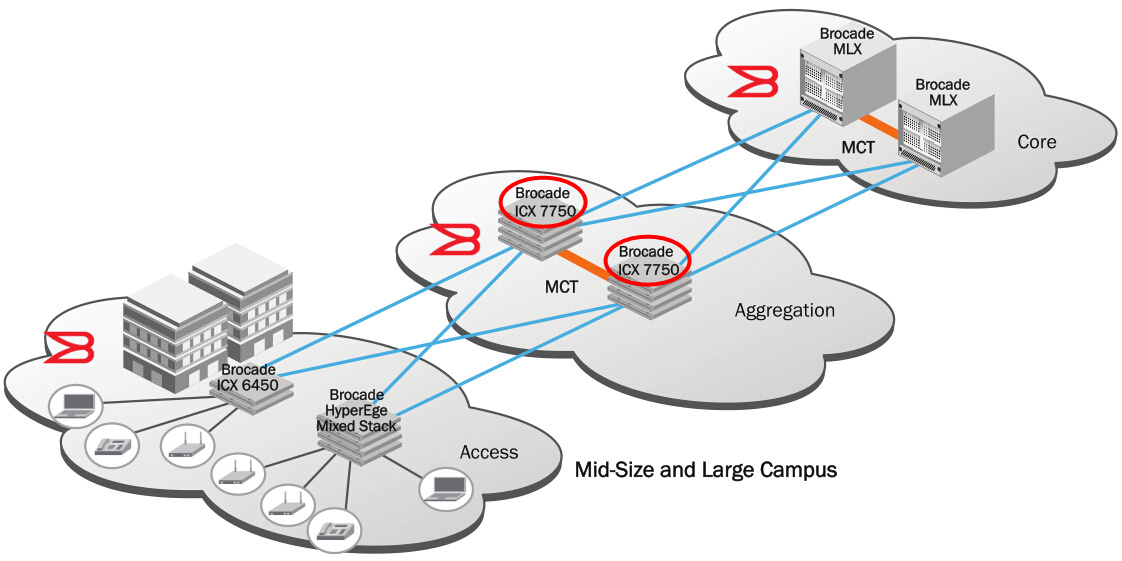 Second application is for the data center ToR (top of rack) server connectivity. It is fit for server racks and only consumes one rack unit. The Brocade ICX 7750 is able to connect to the data center middle-of-row or end-of-row aggregation chassis with either 10 GbE or 40 GbE. 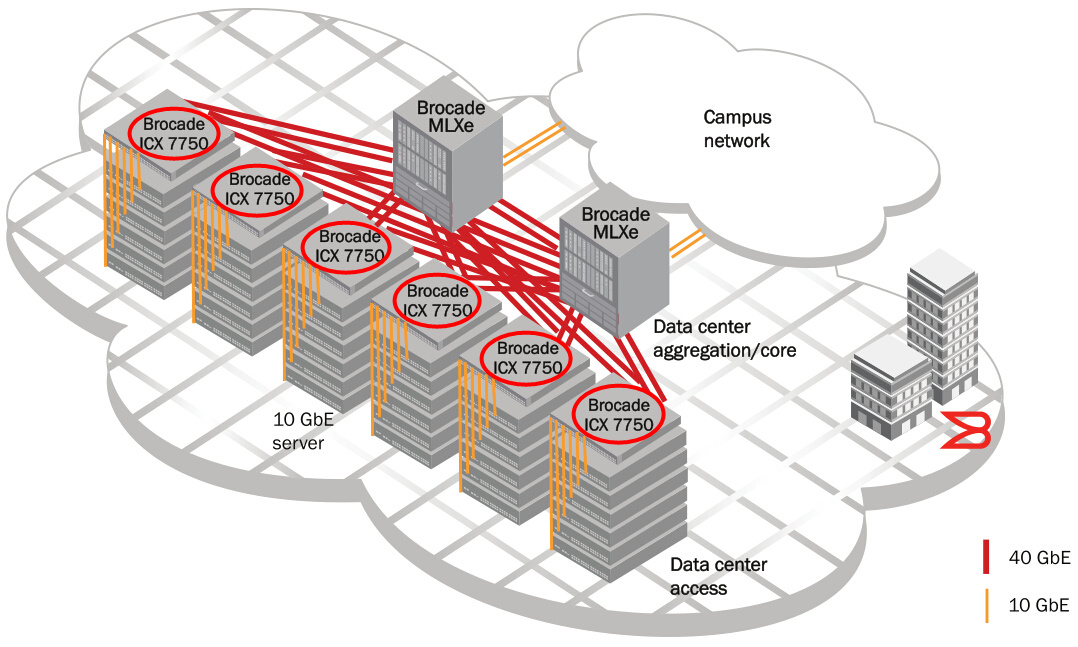 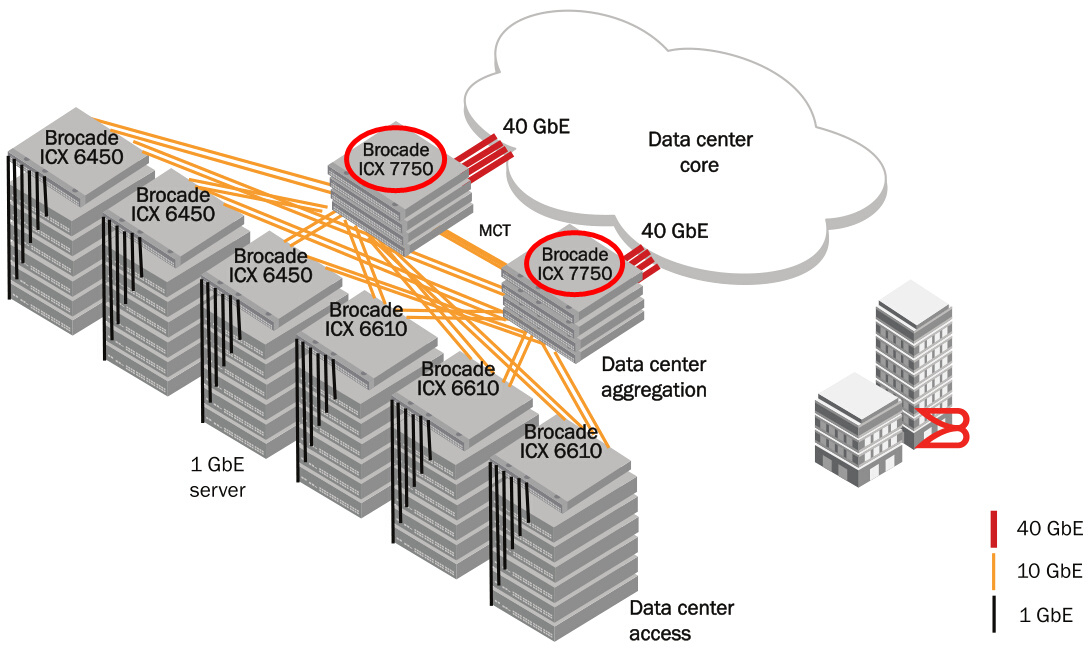 Here are some transceivers and cables supported for Brocade ICX 7750 switch in 1 GbE, 10 GbE and 40 GbE networks. Using the correct optics will benefit the network performance.

Brocade ICX 7750 switch is suitable for 10 GbE and 40 GbE campus aggregation and core layers, as well as ToR deployments in data centers. FS.COM provides a series of transceivers and cables fully compatible to the Brocade ICX 7750 switch. If you are looking for the high-quality and cost-effective optic assemblies, please visit www.fs.com or contact us via sales@fs.com for more details.