Inside the BiDi Products

The transition to 40G is in its full force, driven by the increasing demand for unimagined capacity and performance from the servers and data centers. It seems that these severs and applications can never be satisfied. For them, enough is never enough. Even if you have not prepared for a 40G Ethernet, you will need it very soon. However there exist some challenges for it.

To solve above problems, 40G QSFP BiDi transceiver based on BiDi transmission technology had emerged. It can transmits full-duplex 40G traffic over one dual-fiber LC connector OM3 or OM4 MMF cable. So, it has the capability to reuse 10G fiber infrastructure. In other words, it enables data center operators to upgrade to 40G connectivity without making any changes to the previous 10G fiber cable plant, resulting in zero-cost cabling migration from direct 10G connections to direct 40G connections. 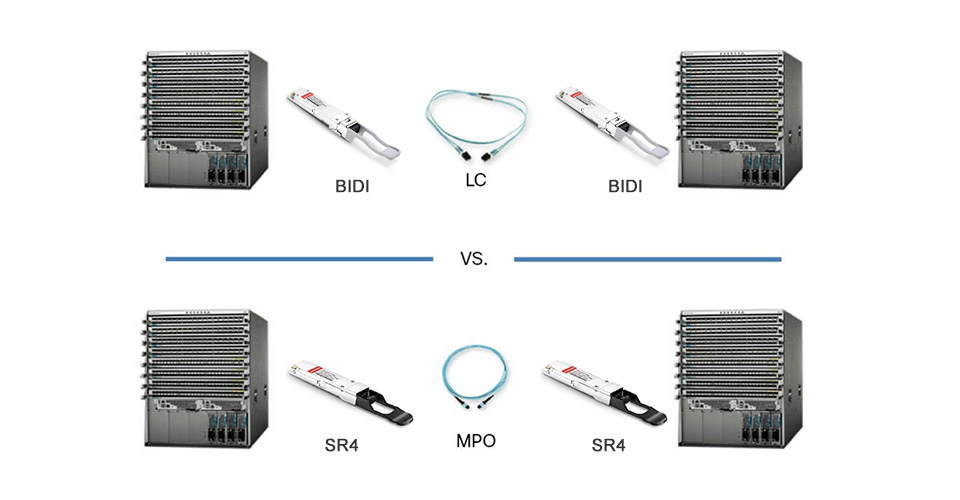 Currently, BiDi technology is widely adopted by enterprises to get upgraded to 40G performance, for it can save a huge cost, whether for upgrading the current data center or building a new one. The table below shows the costs and savings of migration and new deployment of 288 direct connections with 40G BiDi technology.

From the table, we can see that with such a huge saving for a data center migration or expansion, 40G BiDi transceivers based on BiDi technology will continue to gain popularity in 40G Ethernet. Since the market for 40G BiDi is broad, have you ever thought about 100G BiDi? Will there be 100G BiDi transceivers in the future? 100G Ethernet is racing to us, and the discussion of 200G and even 400G Ethernet has started heating up among data center professionals. Under this circumstance, there has been talk that a 100G BiDi optic will be available soon to the market, and I believe that should happen sometime this year. There is no standard for 100G BiDi right now, but we can still predict that the 100G BiDi will utilize an LC connector running on duplex signals. The unknown is the distance it will run on OM3/OM4 glass.

The obvious advantage of utilizing BiDi transceivers is the reduction in fiber cabling infrastructure costs by reducing the number of fiber patch panel ports, reducing the amount of tray space dedicated to fiber management, and requiring less fiber cable. Although BiDi transceivers cost more compared with traditional two-fiber transceivers, the cost savings of utilizing less fiber is more than enough to offset the higher price of them. And the 100G BiDi transceiver will run to us sooner or later, which may become the most economical and efficient choice for your fiber optic network. Let’s wait and see.