Server RAM, or server memory, is often the factor considered when choosing the hardware for servers. It acts like short-term temporary memory, processing data from hard disk drives or solid-state drives to the CPU for quick and easy access. RAM designed in serves comes in different types with their unique performance. Understanding the types of server RAM will help you choose the right memory for your server and therefore boost your network.

First of all, let's take a look at the classification of computing memory as the following figure shows. There are two basic memory types: static RAM (SRAM) and dynamic RAM (DRAM), which processes data in different ways. 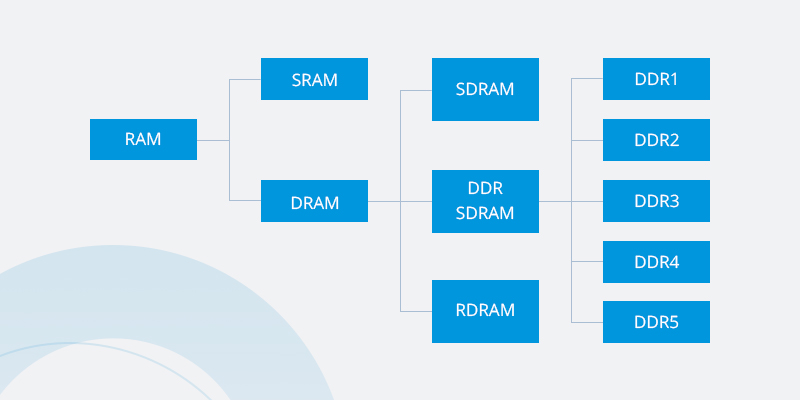 SRAM stores data using the six transistor memory cells while DRAM is made up of two parts: a transistor and a capacitor, which are arranged in an integrated circuit.

The design of DRAM is aimed at overcoming the disadvantages of SRAM. Though reducing the memory elements helps with the reduction in cost and increase of storage area but makes DRAM slower, most RAMs we meet today in general usage are DRAM.

With the explosive increase of 5G, cloud computing, IoT and other applications requiring massive data storage, the need for DRAM is expected to grow rapidly.

In terms of the technology applied, DRAM can be classified into three types: SDRAM, ROADM and DDR SDRAM. Do not mix up SRAM and SDRAM together though they look alike.

SDRAM is the abbreviation of Synchronous DRAM because SDRAM is designed to synchronize itself with the timing of CPU. The SDRAM chip's memory speed is synchronized with the CPU clock speed. So that the CPU can perform more instructions at a time.

SDRAM has been in existence for many years and is widely used in computers and other technology. DDR actually is the newer generation of synchronous DRAM, which has variants from DDR1 to DDR2, DDR3, DDR4 and the latest fifth generation of DDR: DDR5. It is also called DDR SDRAM because it has double the data rate of SDRAM.

As time goes by, DDR was superseded by the newer generations but they all operate on the same principle as DDR. Until now, DDR1 and DDR2 are no longer in use but DDR3, DDR4 and DDR5 are still widely used in the market. If you are curious about the difference among these relatively updated DDR formats, you can click DDR3 vs. DDR4 vs. DDR5 for reference.

Now, let's turn back to the SDRAM and its variant—DDR. The following figure comparing SDRAM and DDR will help you know better about them:

RDRAM is the abbreviation of Rambus DRAM, which was available as an alternative to SDRAM in the past. Due to manufacturing costs and licensing fees, the cost of RDRAM is much higher than SDRAM, generally two to three times the cost of SDRAM. It was found in late 1999 through 2002 and applied to high-end PC systems and servers. Nevertheless, chipsets and motherboards started to shift to DDR after RDRAM, RDRAM is less likely to play a big role in server RAM. Most servers currently use DDR SDRAM, but only a small amount of RDRAM is utilized.

In the terms of the appearance that pins installed on DRAM's sides, Single In-Line Memory Module (SIMM) and Dual In-Line Memory Module (DIMM) are the two different types of DRAM in physical terms. They are different in pin outs, memory capacity and mechanical outline. SIMM has a 32-bit memory bus width, while DIMMs offer double that—64 bit, which support up to 128GB of memory. DIMM has more pin versions than SIMM, including pins for power and ground connections, while SIMM doesn't. And DIMM often has a longer length than SIMM because it has pin connections on both sides but SIMM has only one side of pins. 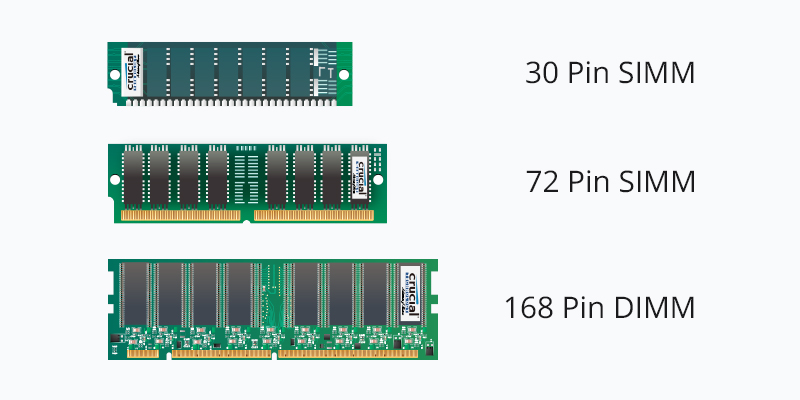 With the RAM walking into the generation of SDRAM and DDR, the memory module type shifts from SIMM to DIMM. Nowadays most servers today still use DIMM. SIMM is outdated, but it is still used on some older released 32bit servers. Check out the specifications of servers from different server vendors, you will find that many servers support DDR4/DDR5 RAM with 1/2 DIMM per channel. The number of DIMM slots is often connected with the RAM capacity. The more DIMM slots your motherboard has, the more RAM you can install.

From the article, you are clear to know what types of server RAM are there and how they evolve over these years. Looking towards the near future, speed increase will further accelerate the adoption of server DDR SDRAM, especially DDR4 and DDR5 memory chips and DIMM memory modules will still be in wide usage in the server market.