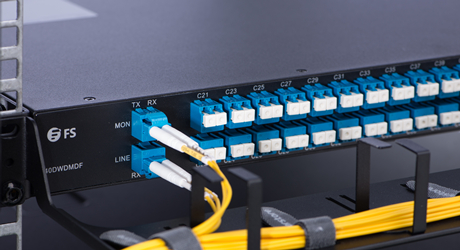 Fiber Mux Demux is a main C/DWDM device to build a higher-capacity C/DWDM network. Both CWDM and DWDM Mux Demux have several types of ports that are quite common to use for increasing the existing fiber optic network capacity without adding any fibers. However, how much do you know about the mux ports on the C/DWDM Mux Demux, such as line port, monitor port, expansion port, etc? Are you familiar with the applications of these different C/DWDM Mux Ports? Get the details about the mux port explanation in the following text for better usage of C/DWDM Mux Demux.

The above picture shows the difference between dual fiber and single fiber line port on the 8-channel DWDM Mux Demux. It is worth mentioning that sometimes the line port of single-fiber WDM Mux Demux is made into a duplex port, but only one of the interfaces is functional. You can also take the example in the third part of the above picture. It shows that the single-fiber CWDM Mux Demux has a duplex line port, but one of the interfaces marked as "N/A" is not in use.

Except for the must-have channel port and line port, WDM fiber Mux Demux can also be added with other ports that bring more profits to the existing WDM network. The following will introduce these special ports that are often added on C/DWDM Mux Demux. 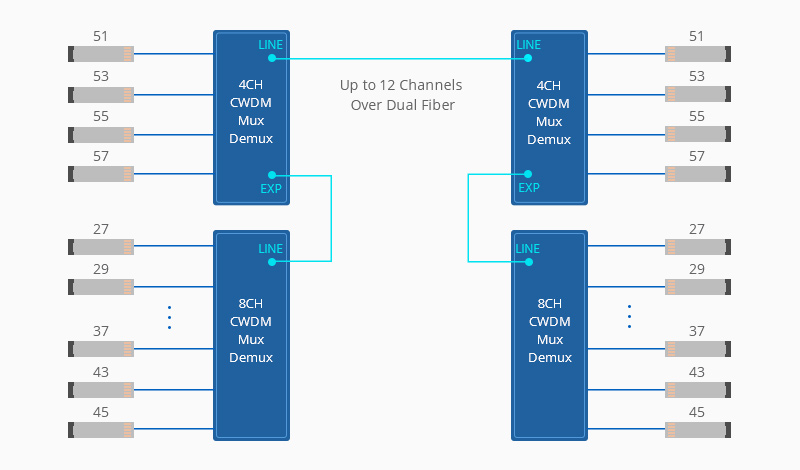 Technicians always choose to add a monitor port on the CWDM/DWDM Mux Demux for better network monitoring and management, which offers an easy way to test the dB level of the signal without service interruption. If you choose a single-fiber WDM Mux Demux, the monitor port should be a simplex fiber optic port. For dual-fiber WDM Mux Demux, you can add a duplex monitor port for the whole network monitoring, or just add a simplex port for Mux or Demux monitoring. Here shows a typical point-to-point network with the use of 40CH DWDM Mux Demux where two switches are connected over DWDM C51 wavelength and an optical power meter is used to monitor the power on fibers connecting the site A and B.

1310nm and 1550nm are just WDM wavelengths. How do they become special? It can be recognized that the channel ports on WDM fiber Mux Demux can only be connected to color-coded fiber optic transceivers like C/DWDM SFP+. But with the special design of 1310/1550nm port, the signal running through ordinary fiber optic transceivers transmitted over 1310/1550nm can also be combined together with other C/DWDM wavelengths. Here offers a case on how to achieve 500Gbps at the existing 40-channel DWDM fiber link with a 1310nm port.

In this case, we firstly plug the 100G fiber optical transceiver over 1310nm wavelength into the terminal equipment, and then use a length of the fiber patch cable to connect it to the existing DWDM network via the 1310nm port on the DWDM Mux Demux. Since the 1310nm ports on both sides are combined into the 40-channel DWDM Mux Demux, this fiber link allows the transport of up to 40x10Gbps through channel ports plus 100Gbps through 1310 ports, which is total 500Gbps.

From all the above, there are five main and commonly-used types of C/DWDM Mux Demux ports, each of which has its special function or usage. Knowing more about their function is very helpful in CWDM, DWDM and even DWDM over CWDM network design and deployment. If you have any C/WDM equipment demand but don't familiar with their functions or don't know how to design the network solution, welcome to visit our website www.fs.com. We supply all the mentioned ports on C/DWDM Mux Demux and other series of C/WDM equipment to satisfy the optical network needs. And customer services are also available.