MTP/MPO technology, which is of high density, flexibility and reliability with scalable, upgradeable properties, is one of the contributors that lead the migration to 40/100GbE. However, the network designers face another challenge which is how to assure the proper polarity of these array connections using multi-fiber MTP/MPO components from end-to-end. Maintain the correct polarity across a fiber network ensures that a transmit signal from any type of active equipment will be directed to receive port of a second piece of active equipment – and vice versa. To ensure the MTP/MPO systems to work with correct polarity, the TIA 568 standard provided three methods, which will be introduced in this article. You can also refer to our white paper Understanding Fiber Polarity for completed polarity guide of our products.

But, what is polarity? A general optical link requires two optical fibers to complete the entire transmission process. For example, the optical module has a receiving end (Rx) and a transmitting end (TX). When in use, it is necessary to ensure that the receiving end and the transmitting end are in an interconnected state, and such matching between the transmitting end and the receiving end at both ends of the optical link is known as polarity. In common cabling systems, connectors such as LC and SC can easily be matched, so there is no polarity issue. However, for pre-terminated, high-density MTP/MPO cabling systems, polarity issues must be addressed.

MTP Trunk Cable Type A: Type A cable, also known as straight cable, is a straight through cable with a key up MTP connector on one end and a key down MTP connector on the opposite end. This makes the fibers at each end of the cable to have the same fiber position. For example, the fiber located at position 1 (P1) of the connector on one side will arrive at P1 at the other connector. The fiber sequence of a 12 fiber MTP Type A cable is showed as the following:

MTP Trunk Cable Type B: Type B cable (reversed cable) uses key up connector on both ends of the cable. This type of array mating results in an inversion, which means the fiber positions are reversed at each end. The fiber at P1 at one end is mated with fiber at P12 at the opposing end. The following picture shows the fiber sequences of a 12 fiber Type B cable.

MTP Trunk Cable Type C: Type C cable (pairs flipped cable) looks like Type A cable with one key up connector and one key down connector on each side. However, in Type C each adjacent pair of fibers at one end are flipped at the other end. For example, the fiber at position 1 on one end is shifted to position 2 at the other end of the cable. The fiber at position 2 at one end is shifted to position 1 at the opposite end etc. The fiber sequence of Type C cable is demonstrated in the following picture.

The following part illustrates how the components in MTP system are used together to maintain the proper polarization connectivity, which are defined by TIA standards.

Method A: the connectivity Method A is shown in the following picture. A type-A trunk cable connects a MTP module on each side of the link. In Method A, two types of patch cords are used to correct the polarity. The patch cable on the left is standard duplex A-to-B type, while on the right a duplex A-to-A type patch cable is employed. 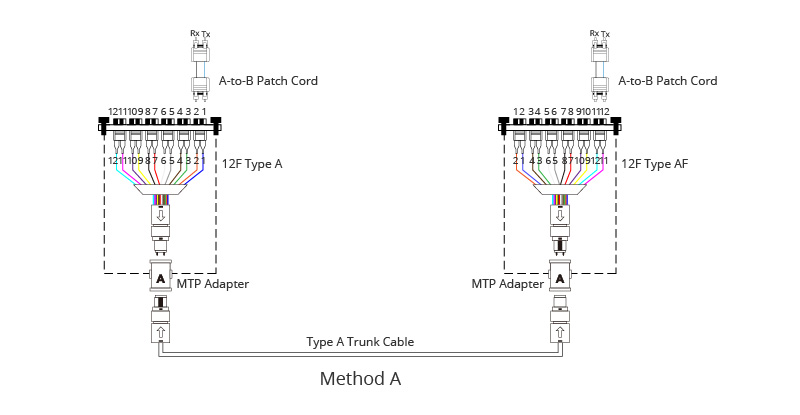 Method B: in connectivity Method B, a Type B truck cable is used to connect the two modules on each side of the link. As mentioned, the fiber positions of Type B cable are reversed at each end. Therefore standard A-to-B type duplex patch cables are used on both sided. Method C: the pair-reversed trunk cable is used in Method C connectivity to connect the MTP modules one each side of the link. Patch cords at both ends are the standard duplex A-to-B type. 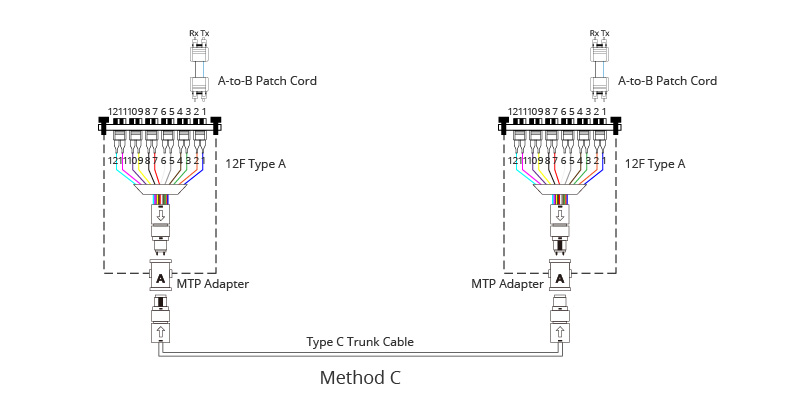 To keep up with the development, migration to 40/100GbE has become the trend. To facilitate smooth migration to 100G network, 24-fiber MTP/MPO cable is recommended. However, the polarity maintenance of base-24 MTP/MPO cabling is complicated. Currently, there is no standard in the industry to define the types of 24-fiber MTP/MPO cables. FS recommends the Type A (key-up to key-up) MTP/MPO trunk cable with our Type A and Type AF cassette, so there is no need for A-to-A patch cable any more. The connectivity method is illustrated in the following picture.

When fiber patch cords have different polarity schemes and gender, IT staff needs to be very careful when replacing patch cords in the field. Those who don’t understand polarity or are in a rush to get equipment up and running can potentially use the wrong patch cord and impact signal transmission.

Where there are A-to-A type patch cable and A-to-B type patch cable, there are three general types of array (multi-fiber) cable assemblies. It is noted that the alignment pins on the MTP/MPO connectors are important for maintaining the correct polarity. Therefore, it is necessary to make sure of proper pin position before you connect MTP/MPO fiber with patch cable.

A-to-B type LC/SC duplex patch cable is the standard crossover cord that maps the Tx port to the Rx port. With the flip, A-to-B type patch cable maintains proper polarity. And MTP trunk cable Type B reverses the fiber positions at each end (1 to 12 and 12 to 1) and the connector keys are both oriented face up. This kind of cable connection is recommended to keep proper MTP/MPO polarity.

Network designer using MTP/MPO components to satisfy the increasing requirement for higher transmission speed, during which one of the big problems—polarity, can be solved by selecting the right types of MTP cables, MTP connectors, MTP cassette and fiber optic cables. The three different polarization methods can be applied according to the satisfy requirements in different situations. For more information about polarity in MTP systems and 40/100GbE transmission polarity solutions, please read the tutorial “Polarity and MTP Technology in 40/100GbE Transmission”.