What Is Unmanaged Switch?

Unmanaged switches are basic plug-and-play switches with no remote configuration, management, or monitoring options, but many of them can be locally monitored via an LED indicator. They can immediately start forwarding traffic once users have plugged them in. These inexpensive network switches are typically used in small networks or to add temporary workgroups to larger networks. They can be desktop or rack-mounted and they are a less expensive option for connectivity switching needs.

Unmanaged switches use auto negotiated ports to determine parameters, such as data rates and whether to use half-duplex or full-duplex mode. Additionally, unmanaged switches have no concept of virtual LANs (VLANs). Thus, all devices belong to the same broadcast domain.

How Does an Unmanaged Switch Work?

The unmanaged switch is the data link layer device. It can identify the MAC address information in the data packet, then forward it according to the MAC address, and record these MAC addresses and corresponding ports in an internal address table of its own. When a device sends a packet to another device, it enters the switch and the switch reads its header to determine what to do with it. It matches the destination address or addresses and sends the packet out through the appropriate ports that leads to the destination devices.

What Is an Unmanaged Switch Used For?

Unmanaged switches are mostly used to connect edge devices on network spurs, or on a small stand-alone network with only a few components. It’s suitable for any business that wants to reduce the cost of network maintenance and has a limited budget. They are also applicable for home use, SOHO, small businesses or to add temporary workgroups to larger networks.

It also can be used to build a Dante network, which uses audio from one place to another over long distances. But note this: Use a switch that does not support EEE (Energy Efficient Ethernet), because EEE is a relatively new technology, using a switch with EEE may cause some poor synchronization performance and occasional dropouts.

Unmanaged switches are an affordable solution for SOHO and SMBs. It works on a plug-and-play basis, which is very convenient, and you don't need any technicians or professionals to help you set up and maintain your Network. 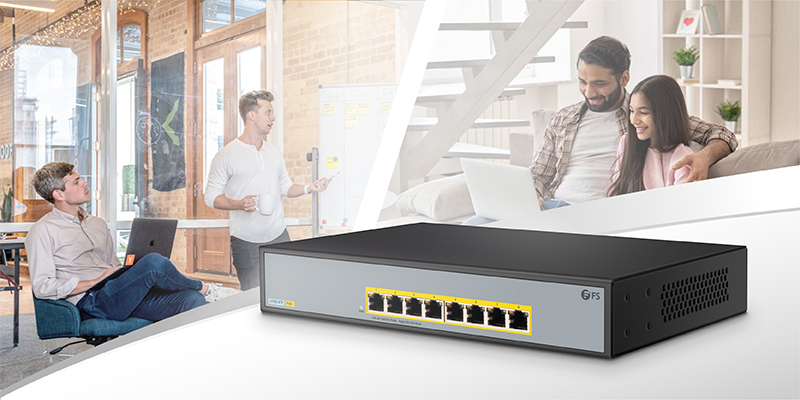 1. Can I Run VLANs on an Unmanaged Switch?

Actually, unmanaged switches have no concept of virtual LANs (VLANs). Thus, all devices belong to the same broadcast domain. If all of the things plugged into an unmanaged switch are on the same VLAN then you can do that. However, if you have a mix of VLANs on a switch, it needs to be managed.

2. Is an Unmanaged Switch Safe?

3.Does an Unmanaged Switch Have a MAC Address?

An unmanaged switch typically doesn’t have any MAC addresses since it’s just a simple device that builds a MAC address table and forwards frames. Learn more details in Switch Mac Address: What’s It and How Does it Work?

4.Can You Use Link Aggregation on an Unmanaged Switch?

5. What Layer Is an Unmanaged Switch?

Unmanaged Switch is the L2 switch. L2 switches can be divided into managed and unmanaged. L2 is a data link layer that works with frames. The switches of this layer identify and transmit data through MAC addresses.

Managed vs Unmanaged vs Smart Switch: What Are the Differences?