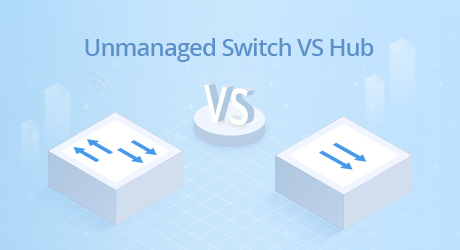 Unmanaged Switch vs. Hub: Are They the Same?

Unmanaged switches and hubs are both networking devices that allow you to connect multiple devices to a single network. There are often some confusions between these two. Is an unmanaged switch the same as a hub? What's the difference between them? All answers are here.

Unmanaged Switch vs. Hub: What Are They?

Unmanaged switches are basic plug-and-play switches with no management or monitoring options. Compared with other switch types, the cost of unmanaged switches is much lower. They provide basic switching functionality. They do not need an IP address, and do not feature web page or SNMP management or any other advanced functions.

Hubs are essentially like "extension cables" on the network. All incoming messages are retransmitted from the port to each device. Every device sees all other devices’ messages regardless of the intended destination. Due to message collisions, unnecessary traffic will slow down the network speed and may cause long response times.

Unmanaged Switch vs. Hub: How They Differ?

The Unmanaged switch is a data link layer device (layer 2). It records the MAC addresses of the computers connected to it in a tabular format. When the data packet arrives, it reads the destination address and sends it to the appropriate system rather than sending it to all connected devices.

Unmanaged switches usually have more ports than hubs and have a larger capacity to accommodate these ports. Different switches have different numbers of ports ranging from 4 to as many as 128 ports. On average, a switch is between 24 and 48 ports for wired connections. Hubs are smaller and featureless ports. A hub can have between 2 to 12 ports of different types from Ethernet to DSL connections.

Unmanaged switches can transfer data to any of the other devices. They are widely used in SOHO and SMBs. SOHO mostly uses a single unmanaged switch to access the various broadband services and devices. You can even build a small wireless home network with an unmanaged PoE switch because it can provide power to your PoE devices, such as TVs and laptops.

Hubs are mostly used in organizations for connectivity, they are mostly used for creating small networks or for network monitoring. All ports of the hub share one broadband, which may cause some poor network response time and collisions on the network. Thus, if you just want to use it on a small network where there are only a few users or devices and request no security or network speed, a hub is an option.

Related Articles: What's the Difference? Hub vs Switch vs Router