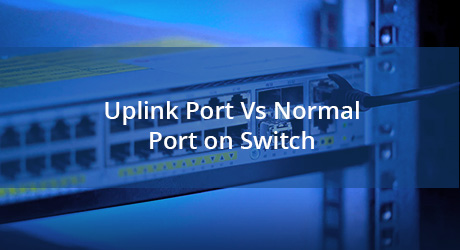 What Are Uplink Port and Normal Port in Ethernet Switches?

In order to better understand uplink port and normal port, we'd better first know about common switch types and port types. According to the applications and functions, the hierarchical internetworking model can be divided into core layer, distribution layer and access layer. Correspondingly there are core switch, distribution switch and access switch that provide different functions in a network. Based on different functions and configurations, network switch ports have two main categories: uplink port and normal port. The uplink port on the switch is usually a higher-speed port used to connect a device or smaller local network to a larger network or connect to other higher-speed devices in the topology. While normal ports are merely a set of ports mainly used for regular data transmission, of which commonly-used ones are RJ45 port, SFP port, SFP+ port, SFP28 port, QSFP+ port, and QSFP28 port. They support fibers or network cables for network connection with different data rates and transmission distances. See more in Get Further Understanding of Ethernet Switch Port Types.

What Are the Differences Between Uplink Port and Normal Port?

An uplink port superficially resembles any other normal port on a hub or switch. Additionally, plug the uplink port of one switch into the normal port of another switch cab to help expand the size of the network. But actually, there are many differences between them.

On a fiber switch, uplink ports have more bandwidth compared to normal ports as they aggregate traffic between different layers. The uplink port is used to connect a device or smaller local network to a larger network, or connect to the next "higher" device in the topology. For example, the edge switch connects "up" to the distribution layer managed switch. Fiber uplink connections on switches can help to increase the throughput and response times of those applications that place heavier demands on a network. The 1GB fiber uplinks are often used to increase bandwidth for database, video, voice and other applications. It is much easier and cleaner than using the normal copper port. 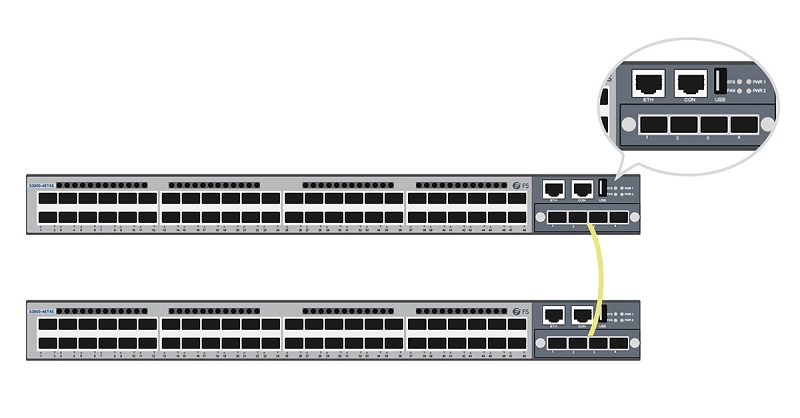 An uplink port can be a stack port. It is one of the two methods to achieve sacking, other than using a dedicated port. Uplink port offers a perfect fit for stacking switches with more flexibility but less cost - simply connect the uplink ports on each stackable switches with DAC/AOC, or optical transceivers and fiber patch cables. Besides, using fiber uplink ports to stack switch can realize long-distance stacking in different application environments.

It is known that when linking two normal Ethernet ports on switches, a crossover cable are usually applied so that the transmit pins at one end of network cable can be connected to the receive pins at the other end. An uplink port does not crossover the transmit and receive pins, therefore it eliminates the need for crossover cable. This means a straight-through cable is all you need when connecting two switches by linking an uplink port and a normal port.

Can Uplink Port Be Used as Normal Port?

With the increasing demands towards bandwidth, a hot topic has gained more and more attention. That is, can I use uplink ports on a switch as normal ports? To answer this question, we first need to learn something about the shared port and dual-purpose port.

Some older network equipment specially configured a normal port next to the uplink port and linked the two together as a pair. Specifically, the traditional hardware logic of these products supported connections to either the uplink port, or the normally shared port, but not both. Connecting devices to both ports of a shared port device stop the unit from functioning properly. Nowadays, many network equipment offers a dual-purpose port which can function either as an uplink or a normal port depending on the type of device connected to it. A dual-purpose uplink is a combination of one 10/100/1000TX copper port and one SFP-based Gigabit Ethernet port. One of these two ports can be used at a time. This added uplink flexibility allows the use of high-density, fiber-uplink based stacks. Dual-purpose uplinks also offer a full-duplex, gigabit-speed trunk for a stack. In a word, that’s to say, we can use the uplink port as a normal port based on specific demands.

Now that we have settled the question, there follow some details we need to pay attention to. For fiber uplink ports, SFP/SFP+ for example, are ports that what’s the manufacturer expects you to uplink a core switch on another floor or in another building, or somewhere too far away for a copper run. In that sense, there’s nothing unusual about an uplink port vs standard port. As for RJ45 uplink ports, they are usually wired as crossover, so there is a physical difference compared with normal RJ45 switch ports.

What Is SFP Port of Gigabit Switch?