Use 28AWG Cable to Optimize Your Network

Most people use copper patch cord with 24AWG copper conductors today. AWG, short for American Wire Gauge, is an index which shows the cross-sectional area of a round wire. But 24AWG cable arouse many challenges like the limited space for management and restricted airflow. So 28AWG wire is introduced. This article will introduce 28AWG cable to deal with those challenges.

The larger the gauge, the slimmer the Ethernet patch cable. 28AWG Ethernet cable is obviously thinner than 24AWG cable. The outer diameter (OD) of a typical 24AWG Cat5e patch cable is about 0.215 inches. The OD of 24AWG Cat6 cable is 0.235 inches and 0.275-inch OD of 24AWG Cat6a. Usually the larger the gauge, the smaller the wire. So the cords that use 28AWG conductors have smaller outer diameter. In the following figure, you can clearly see that the OD of a 28AWG Cat5e cable is 0.149 inches. The ODs of 28AWG Cat6 and 28AWG Cat6a cables are respectively 0.15 and 0.185 inches. With such small OD, what benefits does 28WG cable have? Please keep reading the following article. 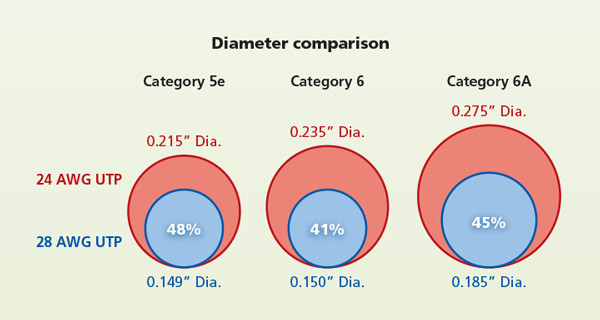 As mentioned above, the cord size of 28 AWG cable is much smaller than that of 24 AWG wire. The use of 28 AWG wire can significantly save more space compared with traditional 24 AWG wire. As the figure below shows, there is a big difference of the bundle size between 24 AWG and 28 AWG Cat6 patch cords. 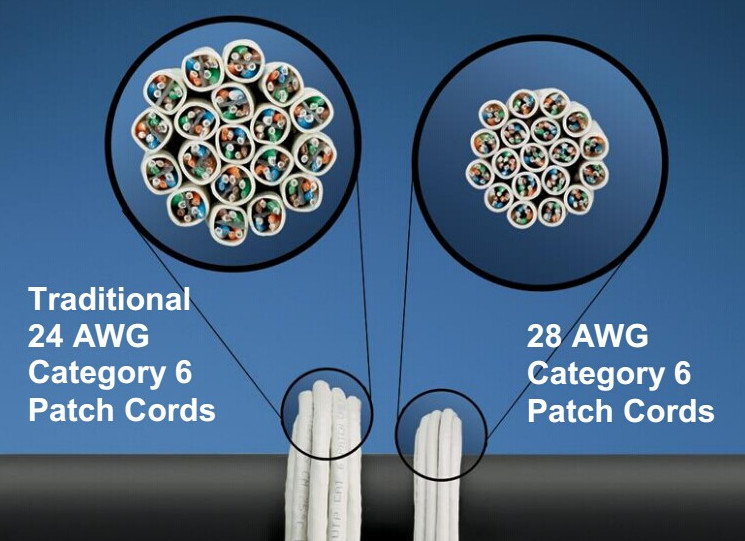 28AWG cable is thinner than 24AWG cable which means it can bring more open space. With more open space, it’s good for airflow and equipment cooling, particularly for large switches.

It’s easier for cable management because of more space for finger plugging access and running cords, thus saving you valuable time and labor. Besides, it also improve the use effectiveness of high-density panels because the patching bulk is reduced.

PoE technology has been increasingly utilized these years. 28AWG patch cords can support the highest PoE levels today. When connecting PoE with copper patch cords, the number of cables per bundle should be restricted considering the temperature rise. For 24AWG wires, the maximum cables of a bundle is 96. When using 28AWG cable, because of its smaller size, more heat can occur since the cables are closer together. So 28AWG cable must be grouped in smaller bundles such as 24 or 48 cables per bundle to stay within the recommended temperature rise. For 802.3af and 802.3at standard, 48x28AWG cables can be bundled together. But for 802.3bt standard with higher power level, 24x28AWG cables is the maximum per bundle.

Gauge of the conductors mainly affects the size of an Ethernet cable. The above content has mentioned that 28AWG cable have many advantages compared with 24AWG cable. It can solve some troubles in current telecom rooms and data centers and offer the benefits of space saving, higher-density layouts, easy cable management, cost and time reduction. But the smaller the diameter of a wire, the more electrical resistance when it carries signals. So Ethernet cable with a smaller gauge can support longer data transmission distance since it offers less electrical resistance. While Ethernet cables with 28AWG conductors are not very suitable for long distance network applications because they offer more resistance which generates more heat. Thus, if you need to build a network requiring further distance transmission, you are suggested to choose 24AWG cable. Of course there are many other factors you should consider, including network speed (Cat5e, Cat6 or Cat6a), shielded or unshielded cable for indoor or outdoor use.