Cat5e copper cabling and 1000BASE-T have dominated data center interconnection application for several years, however, the upgrading to 10GE, 40GE and beyond poses a significant hindrance in both power consumption and cost. That’s when high speed direct attach cable (DAC) snucks in and becomes an integral part for inter rack cabling and Top of rack switching. Here tells what is DAC cable.

What Is DAC Cable — Definition, Structure and Specification

What is DAC cable? A direct attach cable, short for DAC cable, is a type of factory terminated twinax cable used to connect switches to routers or servers. These cables consist of fixed lengths of shielded copper coaxial or fiber optic cable with fixed pluggable transceivers on either end with varying gauges from 24 to 30AWG. DAC cable can achieve interconnection up to 15m via twinaxial copper cable, and reach 100m over active optical cable at 10Gbps, 40Gbps or beyond.

The direct attach copper cable is a fixed copper assembly that connects directly into “transceivers” and can be brought in several lengths for short distances of up to 15 meters. DACC can be either passive or active. direct active optical cable bonds the fiber connection inside the transceiver ends, creating a complete fiber cable assembly much like a direct attach copper cable, but with a 3-200 meter reach capability.

Passive DAC cable contains no electrical components, so it has minimal power consumption of <0.15w, but the linking distance is limited to 5m. While active copper cable (ACCs) contains electrical components in the connectors that can boost signal levels, allowing reaching greater distances (5m or more) via copper media and ensure better transmission quality. This makes active copper cables slightly more expensive and consumes more power than direct attach passive copper cables. The details can be seen in the following table.

The following list highlights some of the advantages and disadvantages of DAC cable.

Higher data transmission rate: The DAC cable can support data transmission rates from 4Gbps to 10Gbps, which is higher than traditional copper cable.
Strong interchangeability: With the development of copper technology, DAC cable and optical transceiver are interchangeable and hot swappable.
Low cost: Copper cable is cheaper than fiber, and using DAC cable will reduce wiring cos.
Good heat dissipation: The DAC cable is made of copper core and has good heat dissipation effect.

The following list highlights some of the advantages and disadvantages of AOC cable.

According to the table, it’s obvious that high speed direct attach cable costs less, consume less power. But it usually has a limited distance compared to transceiver attached with cabling. Thus for any short range connection measuring from 5m to 100m, a better performing DAC cables offer easier and more affordable solution. But when the distance range is beyond 100m, optical transceivers are preferred.

The following table displays the list of popularly used 10G/25G/40G/56G/100G DAC and AOC cables along with respective prices.

56G QSFP+ cables supports up to 4x14G per lane, are marked as the efficient and lower power alternative to short length interconnects between 40G InfiniBand 4x FDR, and 56G Ethernet network. 56G QSFP+ DAC cables have the same construction as 40G DAC cables, therefore the operation of 56G QSFP+ DAC and 40G QSFP+ DAC in 40G network deployment is the same.

QSFP28 to QSFP28 direct attach cable and 100G QSFP28 to 4×SFP28 breakout DAC cable are the popularly used cable types for 100G interconnection cabling. QSFP28 to QSFP28 direct attach cooper cable contains four high-speed copper pairs, each operating at data rates of up to 25Gb/s for a total of 100G. While QSFP28 to 4 SFP28 Breakout DAC cables can support 100G to 4x 25G Ethernet interoperability. It is commonly used in 100G to 25G migration. 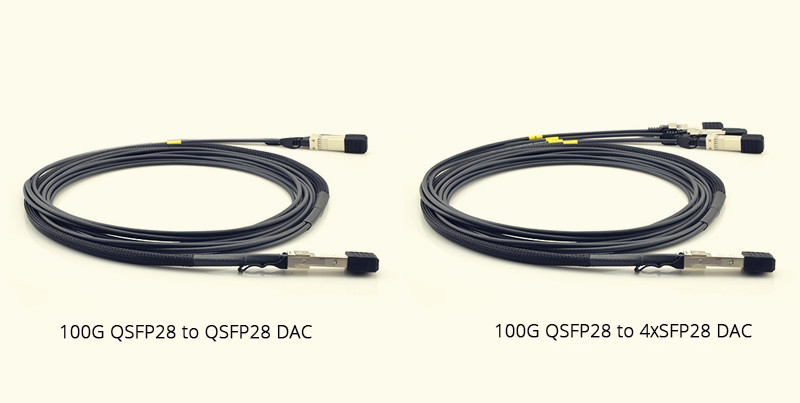 With so many options and vendors on the market, which one should I choose and trust? FS.COM offers the most fully-featured DAC and AOC cables in various form factors and different data rates including 10G, 25G, 40G, 100G and also 56G. We can customize direct attach cable assemblies of various lengths, compatibility with all major brands, different wire AWG ranges and so on, to meet any requirement of customers.

In addition, we are able to make the form factors on either end with different brands. For example, if you are in want of interconnecting Cisco to Juniper switch, then we are capable of making the form factor to Cisco on one end and the other to Juniper (as shown in the above picture). Most importantly, each of our DAC cable is strictly tested to ensure 100% compatibility with all major vendors and systems, and guarantee its smooth function on network devices.

What is DAC cable, according to aforementioned details, we know that high speed direct attach cable is an ideal short-reach solution for high density, high speed I/O data center applications in the networking. It can be either DAC or AOC cable type and in different data rates such as 10G/25G/40G/56G/100G.