What Is a Leaf Switch and Leaf-Spine Architecture?

In hyper-scale data centers, there might be hundreds or thousands of servers that are connected to a network. In this case, the leaf switch can be deployed as a bridge between the server and the core network. Where there is a leaf switch, there is a spine. Leaf switches work in conjunction with spine switches in data centers to aggregate traffic from server nodes and then connect to the core of the network. This is the so called “leaf-spine” architecture, where there are only two tiers of switches between the servers and the core network. The leaf-spine architecture helps prevent network bottlenecks, improves latency, and reduces deployment and maintenance costs. Thus, it has become a popular data center architecture designed especially when data centers grew in scale with more switching tiers.

For any data center application, the overall network performance is highly dependent upon the design approach that is utilized. The traditional three-tier and leaf-spine architectures are two classic approaches to design data center networks for north-south and east-west traffic flows respectively. So what’s the difference between them and which one is better for you? As shown in the figure below, the traditional three-tier network architecture consists of three layers: core, aggregation and access. This three-tier topology is typically designed for north-south traffic. If massive east-west traffic was delivered through the traditional three-tier architecture, devices connected to the same access layer may contend for bandwidth, resulting in congested uplink among the access layer and aggregation layer. 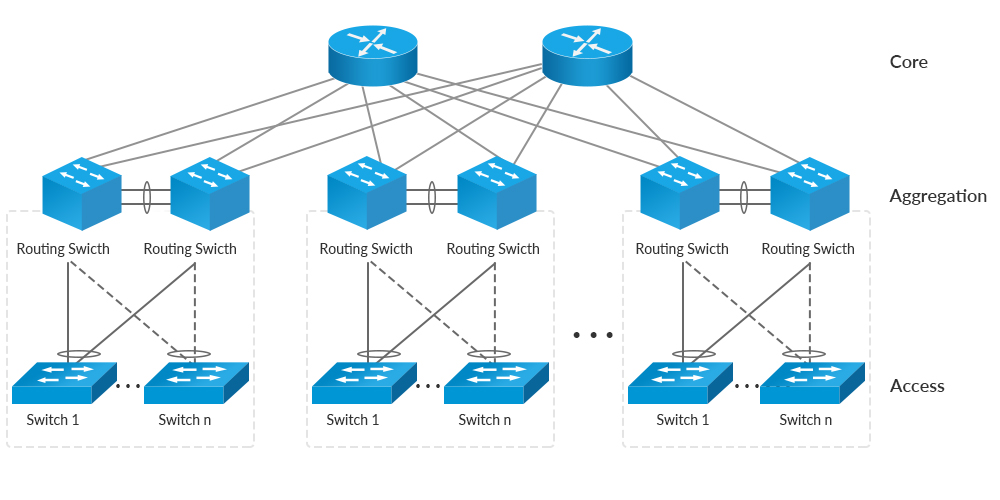 The leaf-spine architecture provides a loop free mesh between the spine and the leaf switches. This can be accomplished by using either Layer 2 or Layer 3 designs. Here we take FS.COM S5850-32S2Q L2/L3 10GbE data center leaf switch and S8050-20Q4C 40GbE Spine/Aggregation switch as example to show how to build a data center leaf-spine architecture. FS S8050-20Q4C is a high performance 40G/100G Ethernet switch for data center spine/aggregation layer switch. It has 20-port 40GbE QSFP+ and 4-port 100GbE QSFP28 in a compact 1RU form factor and supports L2/L3/Data Center/Metro applications. FS S5850-32S2Q is a 10gb switch with 32-port 10GE SFP+ and 2-port 40GbE QSFP+ in a compact 1RU form factor. With low latency L2/L3 features, it can play as a leaf switch to meet the next generation Metro, Data Center and Enterprise network requirements. 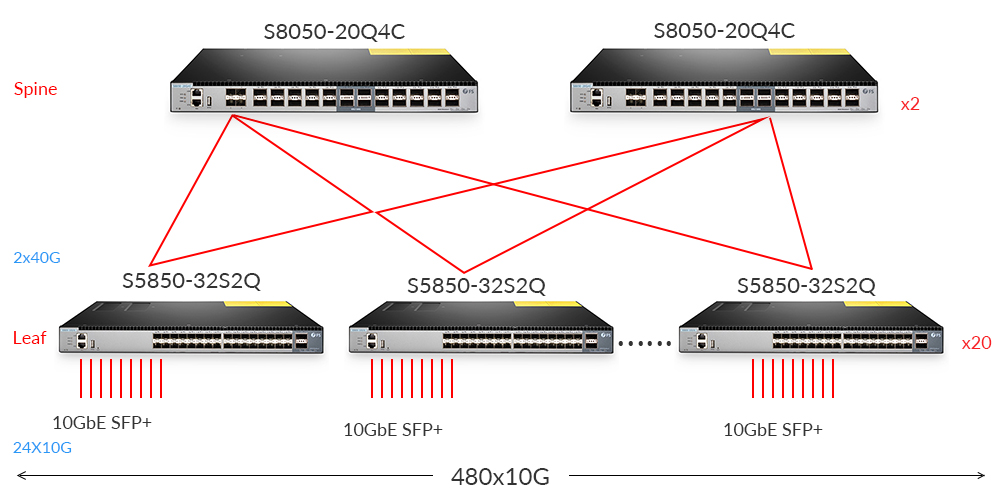 1.Does FS 10GbE data center leaf switch support ONIE and Open Flow ? Can it run with another NOS?

FS S5850 Series data center leaf switch can support G.8032 or ERPS, but N5850 can’t. G.8032 and ERPS are both technology of Loop Protection, but they differ from each other. ERPS can only be switched within 50ms on the optical interface, while G.8032 linking with CFM can be switched within 50ms on the electrical port through. Both of them can be applied to the ring network, and the convergence time is not affected by the number of nodes of the network.