The adoption of Internet Protocol cameras (IP cameras) realized the migration to complete IP-based video systems. IP cameras can be connected directly to the IP network as needed. The picture below presents a camera-based unified IP network. 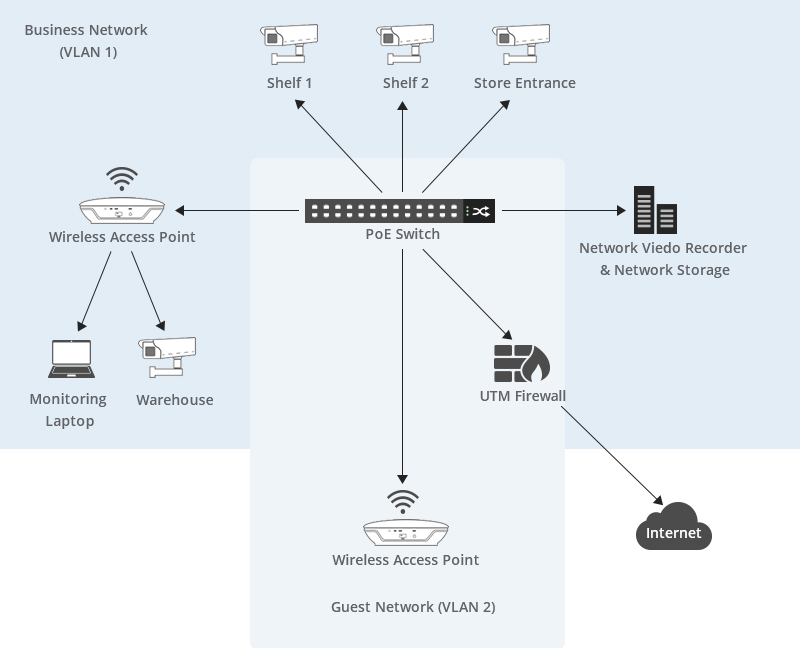 According to statistics, with about 15 million surveillance cameras installed in the United States today, almost 10 percent are now IP-based. Indeed, there is a tendency for more organizations to migrate to complete network-based digital systems now. To enjoy the improved security and automated efficiency that this type of surveillance system brings, PoE camera system, combining IP cameras with advanced PoE technology, is becoming a better choice on account of remarkable advantages.

The major task of surveillance cameras is watching the entranceways to detect entering or leaving, so as to reveal the "grab and run" theft and invasion events. The PoE security camera systems can flag these events and send notifications directly to the user's smartphone, along with the recorded footage. Some camera systems can even get a one-touch connection to local law enforcement.

Distance won't be a problem in a PoE surveillance system, because the video from IP cameras can be monitored from remote sites, or even to locations outside the business with the aid of the Internet. Through integration with the existing Ethernet IP network, the operation of the surveillance cameras can be incorporated with an organization's IT environment. Thus, multiple applications will be converged onto a unified network. The picture below presents a unified remote site surveillance IP network. 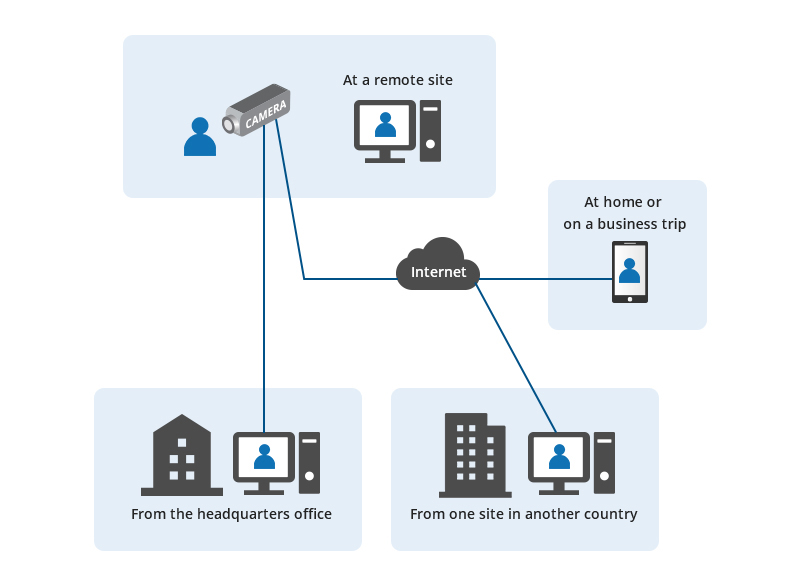 In a PoE IP video system, a series of measures are taken to prevent access from unwanted users and malicious users. PoE security cameras may provide different levels of password-protected access: some authorized users may only have access to view images from specific cameras; some may have operator-level access; a few have access to administer all settings in the PoE network camera. Besides the multi-level password protection, PoE security camera systems adopting IP networks may offer AES encryption and IP address to choose to give or deny access rights to IP addresses, and use mechanisms like IEEE 802.1X to strictly control network access.

With the support of PoE switches, both power and data can be provided to cameras over the same Ethernet cable, without separate power cables. Only one single unshielded twisted pair (UTP) runs to PoE switch, which provides a cost-effective and time-saving solution. For new installations, the current cabling can be incorporated, and subsequent upgrades or expansion of this security camera system can also be simplified on account of the utilization of the existing network infrastructure.

Unlike analog systems that require coaxial, fiber, or UTP cabling, IP security cameras can be deployed anywhere reachable by Ethernet cabling or a wireless access point, which expands deployment even to reach outdoor coverage. Adding, moving, or removing cameras without taking other cameras or equipment offline ensures no gaps in the recording.

Adopting a PoE surveillance system on IP networks is beneficial to protecting the integrity and availability of recorded surveillance videos and images—to prevent data loss, back up mission-critical data, and recover quickly from outages. All the devices including IP cameras, PoE switches, wireless access points (AP), and storage devices can be monitored in case of detected issues. For instance, if an IP camera goes offline, the PoE security camera system can immediately alert administrators, who will assign another camera to cover that area. Moreover, if a storage unit is unavailable, the backup storage can automatically take over to prevent recorded data being lost.

Security camera systems are crucial for all walks of life--protecting life and property safety, minimizing the risks of criminal activity. The PoE security camera solution is adopted in many crucial industry sectors like plants, shopping malls, large-scale enterprises, and any business requiring surveillance cameras. Not merely focusing on these key fields, the PoE security camera has also penetrated in the daily life scenes to some degree, like residential complexes, educational institutions, public libraries, hotels, and so on. Powerful surveillance systems are also significant to both environmental monitoring and urban management. The following will discuss the application of video surveillance from multiple perspectives.

The picture below presents the applications that PoE switch cooperates with PoE cameras. 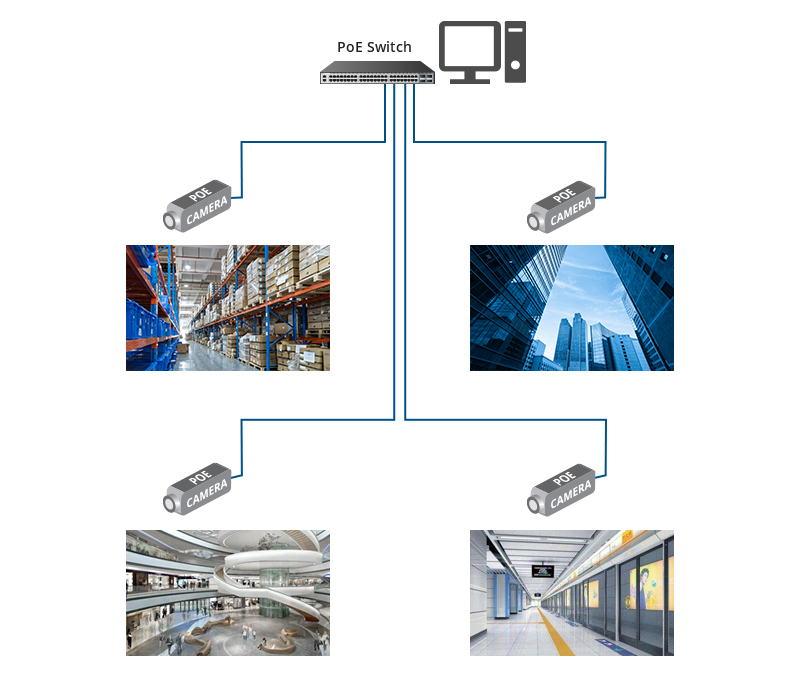 The manufacturing industry won't live without the management of factories. The high-resolution PoE surveillance camera is often adopted in some warehouses, not only to prevent the theft of equipment and valuable goods but also to pre-empt some potential accidents.

For some high-tech businesses, the installation of PoE cameras in offices will create a converged IT surveillance system. If you want to get network switches involved or add more, you can connect the IP cameras directly to the existing or the new PoE switches via Ethernet cables, and at the same time, set up video storage and management servers. Usually people tend to use VLANs to segregate the ports for camera connections and introduce path resiliency to avoid communication disruption. Here is a sample diagram for the application scenario in the office building: 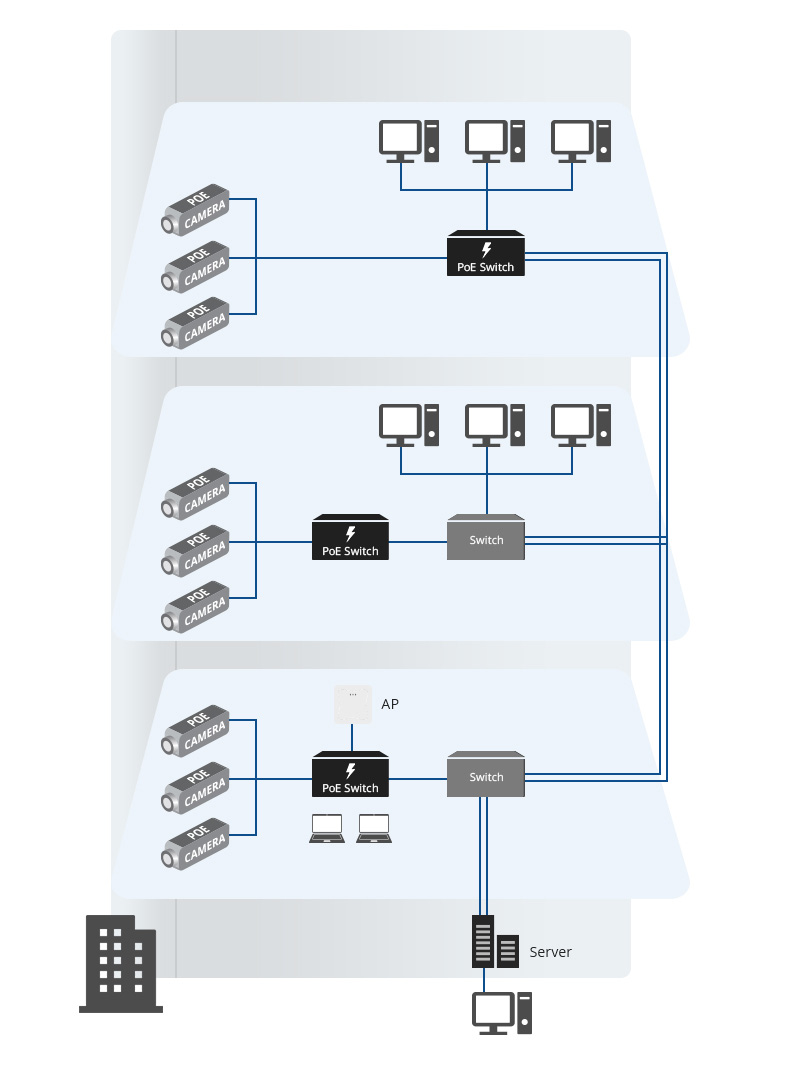 PoE security camera systems are also ubiquitous in our daily lives. They are employed in big shopping malls for the identification of suspicious shoplifters and in parking areas with multiple locations for the detection of suspicious events. Besides, many schools deploy surveillance networks adopting PoE IP cameras to monitor the public areas inside the campus to ensure the safety of the children.

As is known, IP security cameras have already been an indispensable part of hospitals--normally installed in entrances, exits, elevator doors, hallways, etc. with no blind spots for the safety of the patients and the medical personnel. In the security control center, the surveillance system receives video feed from each camera and enables the security guards to maintain real-time surveillance of the entire hospital. Even security cameras for homes have been deployed. The following model will provide a visual explanation: 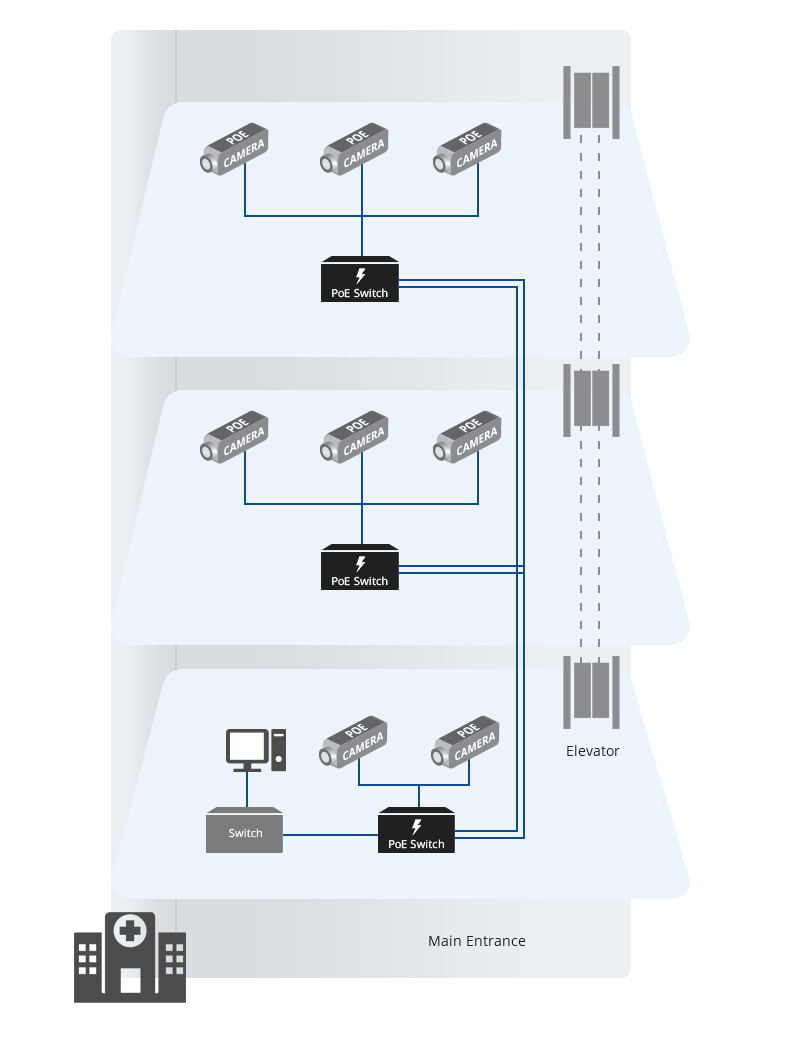 On the one hand, IP surveillance technology has been adopted in the monitoring of the natural environment. Outdoor security cameras are very necessary and have been used widely. For example, with the installation of PoE IP cameras, the local governments and authorities can monitor and evaluate river levels regularly, in order to provide early warnings of floods and other disasters.

On the other hand, PoE security camera solutions help create a safer and better-organized city. To take the transportation monitoring system as an example, IP cameras are connected to the network infrastructure that already exists along railways. Additionally, IP surveillance cameras are placed throughout stations, which provide a safety and security service to passengers. Alarms can be raised when passengers are seen entering restricted areas. These cameras also help prevent vandalism and theft crimes. Particularly for some unmanned stations, these PoE IP cameras with remote monitoring function will make real-time surveillance possible. In these cases, industrial PoE switches are used widely. Industrial PoE switches have the same functions as PoE switches--supplying PoE power and data to IP surveillance systems, but perform better in harsh environments. If you want to know more about industrial PoE switch, you can refer to: Everything You Need to Know About Industrial PoE Switch. 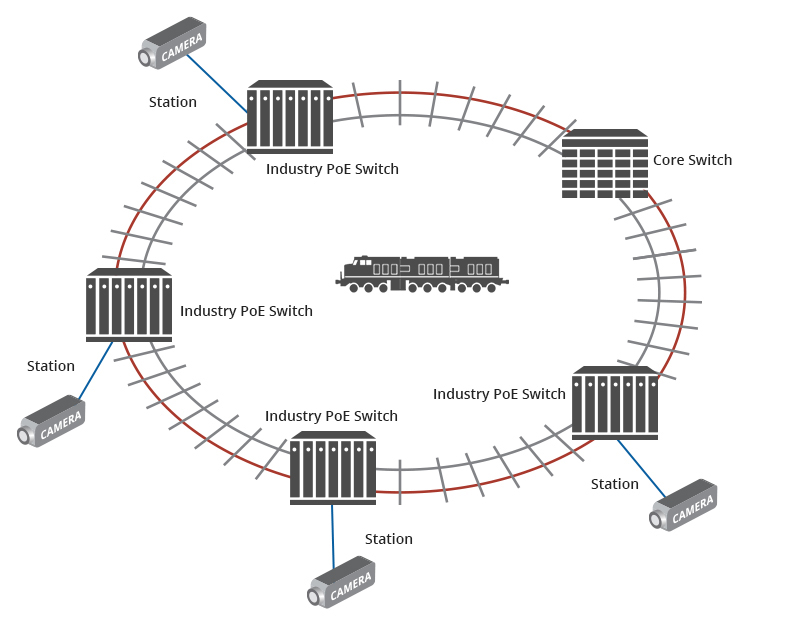 There are some technical requirements to consider before deploying the PoE security camera system or transitioning from an existing analog system to a high-functioning IP surveillance system. Network bandwidth and latency, network features and capacity, wired or wireless, hard disk storage capacity and application software all should be taken into consideration. How to design, deploy, secure, and optimize a network for PoE IP surveillance is also a question worth thinking about. Make sure that you have an overall and elaborate plan for your future PoE security camera system.