With the rapid development of the Internet, increasingly high requirements are imposed on the reliability of networks. It’s vital for users to focus on keeping the accessibility to external networks when the network fails. There’re many measures that IT staff can do to reach the uptime goals, such as using physical redundancy solution, providing battery backups in case of an outage. They can also configure logical redundancy by Cumulus Linux VRR or standard VRRP to ensure the reliability of the access from LAN access to external networks. This article will go through an overview of Cumulus Linux VRR technology, explaining its superiorities over standard VRRP, and show you how to implement this function.

VRR (virtual router redundancy) is a unique technology developed by Cumulus Linux, which can allow hosts to communicate with any redundant router without any reconfiguration or running any dynamic router protocols and router redundancy protocols. It means that in a VRR-enabled network, all the routers will respond to ARP (address resolution protocol) requests from hosts. Figure 1 shows a basic VRR-enabled network, which includes some hosts, and two routers running VRR with MLAG (multi-chassis link aggregation). If host 2 sends an ARP request, both router 1 and 2 will forward traffic to it. But when the host receive one reply, it will ignore the other one. This way can ensure the network connection will work if one router goes down. 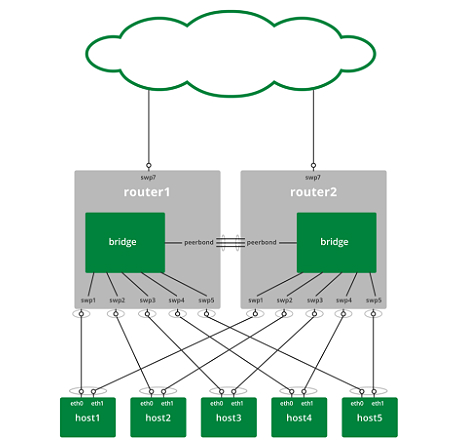 Cumulus Linux VRR is like VRRP (virtual router redundancy protocol) because both the two technologies can provide logical redundancy to deliver data and ensure the network’s reliability. So some users often regard them as the same thing. That’s absolutely a mistake. Cumulus Linux VRR offers more benefits than standard VRRP.

In the standard VRRP configuration, one router is elected as the virtual router master with the other routers acting as backups. And only the master router is allowed to forward packets, and the backup router (the one is configured with the higher priority) will take over the master router role if the master one fails, so as to ensure the connectivity. Note that, a single VRRP backup group can not realize loading balance. But it can be used for loading balance through creating multiple VRRP groups, which requires to configure different gateways for different hosts in the LAN. This method increases the complexity of the configuration when comparing with Cumulus Linux VRR.

Cumulus Linux developed NCLU (network command line utility) for users. With it, users can configure VRR directly without editing configuration files or entering specific modes, which is an easier and efficient way. Just type the command below on two routers, then the setup is finished. Here, address-virtual is the keyword to enable and configure VRR.

On the other hand, using standard VRRP, users have to use a few commands. The basic command syntax includes:

Users have to enter in the “switch>enable” or “switch#configure terminal” mode to finish the setup. It’s more complex than Cumulus Linux VRR commands, which may cost more time.

In addition, Cumulus Linux VRR can be used with MLAG, while standard VRRP can not.

All the three network switches have been installed Cumulus Linux, ranging from 10G switch, 25G switch, 40G switch and 100G switch. Customers can choose one based on their need and use the NCLU commands below to create a VLAN-aware bridge interface for a VRR-enabled network.

Some parameters of these configurations mean:

These commands then produce the following / etc / network / interfaces snippet.

Then, VRR configuration is completed.

Cumulus Linux VRR is a unique and powerful function. It can support loading share for one VLAN with simple configuration. With it, users can keep their networks up and running in emergencies where some routing devices go down, and prevent packet loss. At FS, we provide 10/25/40/100G switch with Cumulus Linux VRR to help users build a reliable network. If you still have some questions about VRR configuration, please contact us via us@fs.com or live chat.