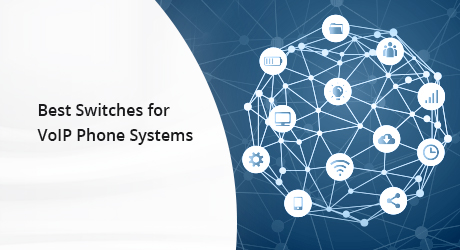 What Are The Best Switches for VoIP Phone Systems?

With the increase in Internet speed and capacity, as well as the increase in technology and costs, more and more companies are abandoning the use of traditional telephone systems. They chose to use a Voice over Internet Protocol (VoIP) system. What is VoIP and VoIP system? Why do we need a switch for VoIP phone system? How to choose the right VoIP switches? This article will give you the answer.

What Is VoIP and VoIP Phone System?

VoIP is a method of making and receiving phone calls over the Internet. It's a cost-effective way to handle an unlimited number of calls and to ensure high voice quality. Instead of the copper wires that landlines run on, VoIP phone systems use the same internet connection that a company already uses.

VoIP systems give remote workers access to the business's phone system from their mobile devices and it also provide a feature set that previously only large corporations using expensive PBX hardware had access to, such as automated attendants, call queues, and computer integration, which allows voicemails to be sent to email in boxes and computers to be turned into softphones.

The VoIP Phone System provides a sophisticated phone system that is easy to set up and configure, and it's significantly cheaper than a landline system. But this system relies on your internet connection, it needs a reliable internet connection with decent bandwidth. If you're in a community with spotty internet service, this type of phone system won't work. If you want to keep the VoIP system working properly, all you need to do is get a suitable network switch.

A network switch can provide enough bandwidth to keep the VoIP phone system running all the time, and allow you to connect as many devices up to your network as you require, the faster the network connection, the better the quality of VoIP calls.

How to Choose VoIP Phone Switches?

Now that a VoIP phone switch benefits a lot for businesses, how should you select the best one for your VoIP phone system? The following aspects should be considered:

As we talked about before, network speed is important for VoIP phone systems, as long as you have a fast internet connection, your phones will provide the call quality you need, and underestimating VoIP bandwidth could result in call quality issues.

Ethernet ports on VoIP phones on the market today support 10 Mbps, 100 Mbps, and/or 1000 Mbps connections. 10 Mbps is primarily used on entry-level models and older phones, 100 Mbps is used on entry-level and mid-range phones, and 1000 Mbps is available on mid-range and executive class phones. if you are using the mid-range and executive class phones or you are using the entry-level and mid-range phones but want a better voice call quality, then it's better to go with the gigabit Ethernet switch, there's no doubt that a Gigabit switch can handle your phone traffic.

Quality of Service (QoS) is a feature of switches that prioritizes traffic so that more important traffic can pass first and it avoids quality loss during high traffic on the network when you are answering important voice calls. If you do have a limited amount of bandwidth, other data-intensive tasks such as downloads can have the potential to compete with your phone calls, with QoS technology, you don’t have to worry that the internet activity of someone else will affect your phone conversation. QoS equipment is useful with VoIP phones or in LANs with high volumes of local traffic, so when you are choosing switches for VoIP systems, choose one with QoS.

A voice VLAN is a capability specifically allocated for users' voice data streams. It ensures the quality of voice traffic by improving the transmission priority when transmitted with other traffic. That is to say, when other services (data, video, etc.) are transmitted simultaneously, voice service will be prioritized and transmitted with a higher forwarding priority. It ensures that your VoIP devices do not have to contend directly with all the broadcasts and other traffic from the data VLAN.

Possessing a PoE switch with an alternative power supply is vital in always keeping the network 100% up because your VoIP network will go into trouble in case your switch goes down. When choosing a PoE switch, you will want to verify that the wattage of the PoE ports is enough.

There are 2 common types of PoE switches: PoE and PoE+, PoE is the standard version found in most VoIP phones. PoE+ is a newer and more powerful version. The biggest difference between these two is the maximum amount of power they provide. PoE can deliver a maximum of 15.4W, while PoE+ can deliver a maximum of 25.5W, so you have to make sure how many watts your VoIP system need.

This feature is key in providing some future-proofing into your network as more devices such as phones, APs, security cameras, as well as some laptops are now being powered by the switches and require more power than previous devices. 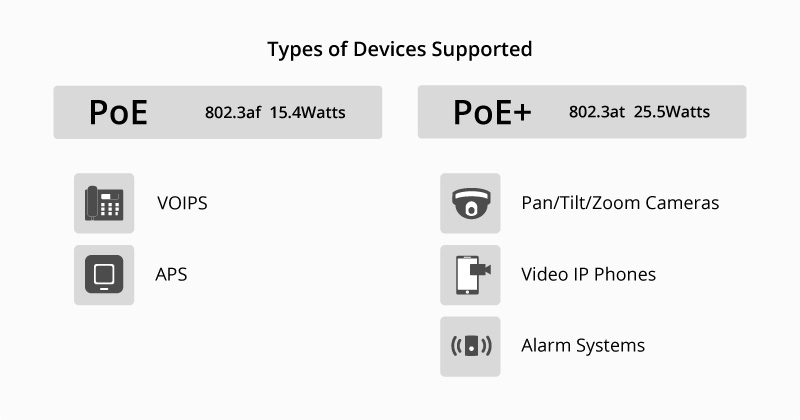 The type of switch you buy really depends on your specific needs. The most common types of switch are unmanaged, managed, and smart managed.

An unmanaged switch is a simply plug-and-play device without remote configuration, management, or monitoring options, it can't support QoS or VLAN, so it is not very suitable for VoIP system. A fully managed switch is more secure and can monitor traffic, it often has a command line that gives you the ability to perform complex tasks. It can do quite a lot in terms of QoS, VLANs, access lists, etc, but of course, it will be much more expensive.

Choosing a suitable VoIP switch can be quite difficult in today's market, due to the amount of variation and types of switches available for different customer needs. However, as long as you have a clear idea of what your network needs, your budget and your setup plan, you should be able to find what you need.