What Are the Main Internal Components of Optical Transceivers?

As a key element in optical communication systems, optical transceivers serve as media between network devices to transmit and receive data. There has been lots of articles and guides on transceiver modules in the perspective of the package type while only a few of them cover the internal elements. This post is going to elaborate the main internal components of optical transceivers.

The main components of an optical transceiver can be generally divided into three parts: the externally visible housing, optoelectronic devices and PCBA. Uncover the metal casing of a transceiver module, you will find the inside components and sub-assemblies joint together.

For general optical transceivers, there are two optoelectronic devices called TOSA and ROSA, each performing the exact reverse functions for their purposes.

TOSA stands for Transmit Optical Sub-Assembly, which bears the responsibility of converting an electrical signal into an optical signal. It is made up of light source (light emitting diode or laser diode), optical interface, monitor photodiode, metal and/or plastic housing, and electrical interface. However, the assembly units are not immutable. In accordance with the transmission distance or application of the optical module, there may be other components such as filter elements in TOSA.

Nowadays the majority of optical modules use laser diode (LD) as light source. Compared with light emitting diode (LED), LD has lower power consumption, higher output and higher coupling efficiency. Even though LED in small quantities is still in use of low speed and short distance transmission owing to its advantage of low cost and long service life. Figure 1 shows the basic structure of a typical TOSA with LD. 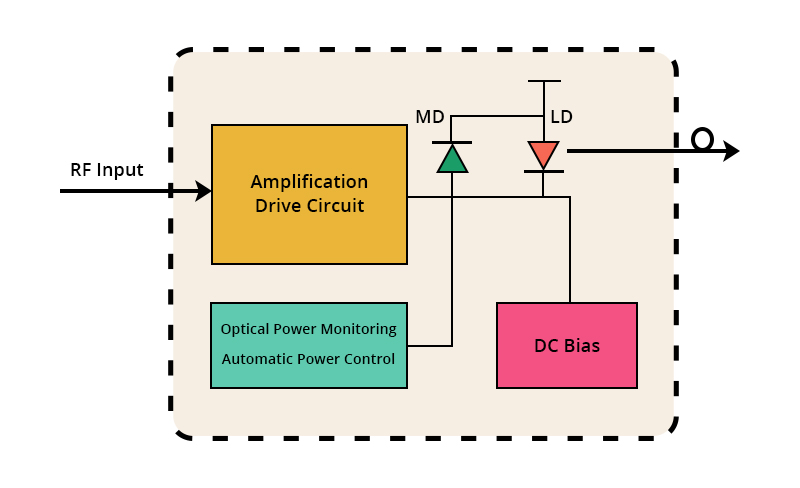 ROSA refers to Receiver Optical Sub-Assembly, the primary function of which is to convert the optical signal transmitted from TOSA into electrical signal. ROSA contains a photodiode (PD), optical interface, metal and/or plastic housing, and electrical interface. Like TOSA, the concrete components of ROSA depends on specific functionality and application of the transceiver. Other components such as amplifier may be included, aiming to reshape input signals degraded by long-distance transmission. The preamplifier converts a current signal to a voltage signal and amplifies the signal to a high voltage gain, while the post-amplifier equalizes the output signal of the preamplifier to an amplitude level suitable for input to the following digital circuit. The following picture indicates the principle of ROSA including Avalanche Photodiode (APD) and Transimpedance Amplifier (TIA). 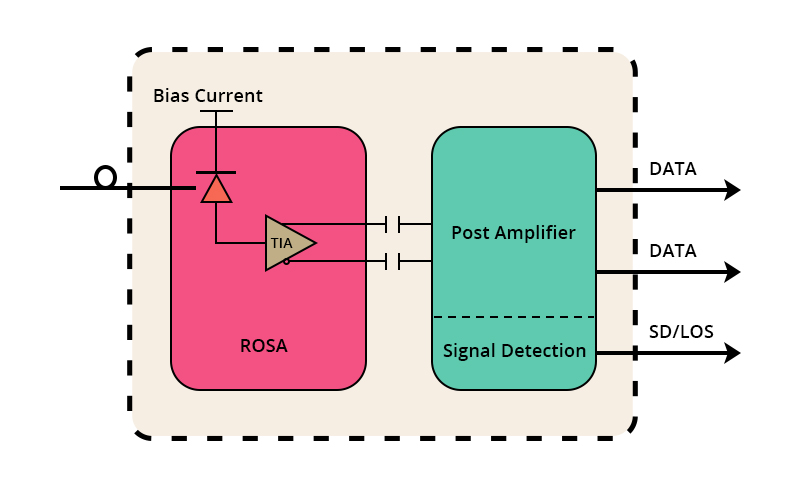 A pair of ROSA and TOSA are combined together inside a transceiver, forming the main transceiver elements and enabling transmitting as well as receiving.

BOSA is short for Bi-Directional Optical Sub-Assembly. It is apparent that BOSA has something to do with BiDi transceivers just as the name indicates. BOSA generates with the development of optical transceiver manufacturing technology. As the transceivers are made much smaller, TOSA and ROSA can be integrated during the coupling process. BOSA are integrated by TOSA, ROSA and a WDM filter, enabling it to support two wavelengths on a fiber using bidirectional technology.

PCBA is the abbreviation of Printed Circuit Board Assembly. It can be also called PCB Assembly or Printed Circuit Assembly. Surface Mounted Technology (SMT) and Dual In-line Package (DIP) are both common methods used in PCB Assembly. Generally, PCB bare board passes through the SMT upper part, and then passes through the entire process of the DIP plug-in. Active and passive electronic components are soldered onto the printed circuit board then the PCBA can be used in a transceiver. PCBA performs the functions of assuring integrated circuits and other electronic components fixed, ensuring the quality of the electronic equipment, and so on.

Difference Between PCB and PCBA

Simply speaking, the main difference between PCB and PCBA is that PCB is a bare board but PCBA is a finished one. PCB, which means Printed Circuit Board, is a carrier for electrical connection of electronic components. PCBA is a completed assembly, which is to say, apart from PCB, there are other parts that are assembled onto the PCBA. After the process of assembling PCB with Surface Mounted Technology (SMT) or something else is finished, PCBA is completed.