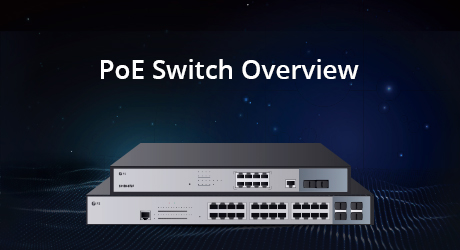 Since introduced to the telecommunication field, PoE switches, as a major application of PoE technology, have made great contributions to simultaneous data and power supply over one single Ethernet cable. Nowadays, in the background of the increasing number of IoT projects such as smart cities and intelligent buildings, PoE switches show greater growth potential. This post will demystify PoE switch in a concrete way by clarifying its functions, the benefits and limitations as well as addressing some FAQs about PoE switches.

PoE Switch vs Non-PoE Switch: Why You Need the PoE Switch?

The reason why you need power over Ethernet switches will be obvious when comparing PoE switch vs non-PoE switch. As the most basic switch, the non-PoE switch refers to the switch that is not PoE enabled to supply power for end-users over Ethernet, but can only send data to network devices. To acquire PoE, users have to deploy a midspan power sourcing equipment (PSE) like the PoE injector between the switch and PDs. This injector or other midspan PSEs can add electrical power while receiving data signals from the cable connected with the non-PoE switch, and then deliver both data and power to PDs (Learn more about PoE injector from What Is a PoE Injector And How to Use It?). In this application, the injector or other midspan PSEs will also need a wire for power. However, for a gigabit PoE switch application, things will become easier. For a PoE switch, only one power cable for the switch and one network cable to connect PDs are required. Then the PD can be directly plugged into the PoE gigabit switch port for both data transmission and power supply. 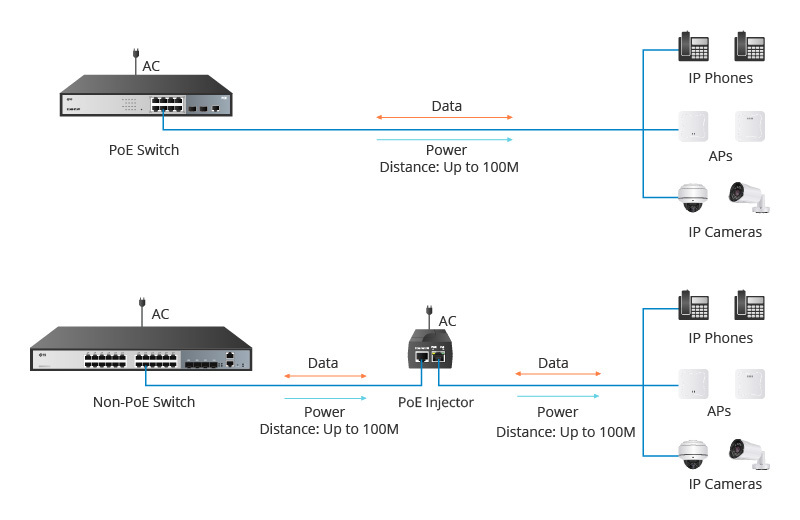 Based on the working mode of PoE vs. non-PoE switch, the PoE switch brings benefits over the following aspects:

Flexibility: Getting rid of the restrictions of non-PoE switches needing additional PSEs and extension cables, the PoE switches gain great flexibility for users’ network cablings. It enables PDs like IP surveillance cameras to be installed based on where it needs to go. Besides, a combination of PoE switch and wireless technology can even make the cable-free environment be possible.

Simplicity: Without the need to consider additional PSEs and installation locations like a non-PoE switch, the PoE switch simplifies the whole network deployment. In addition, good PoE switches also enable simple network management protocol (SNMP), which provides a simpler way to supervise and manage the switch.

Cost-Efficiency: With PoE network switch, there is no need for users to purchase and install additional electrical wires and outlets, which creates significant savings on installation and maintenance costs and time.

However, there are also some limitations on PoE switches you should pay attention to:

Distance Limitation: The distance that PoE switches can transmit over Ethernet is generally up to 100 meters. For those large campuses, restaurants, and enterprises deploying PoE, the 100-meter distance limitation is a challenge. However, there are still methods to extend PoE range—devices such as power extenders or powered fiber cables. For more information, refer to Powered Fiber Cables: Solution for Extending POE.

Power: If you require high power over PoE networks, you are bound to make sure the power capacity of your PoE switches meets your needs because there is a power limitation based on the PoE standards and PoE Wattage.

1. Do I Need Special Cables for the PoE Switches?

No. Generally, the Ethernet cables that should be used for PoE switches only depend on the data rate of the PoE port, for example, 10/100M can use Cat3 or better cables; 1000M needs Cat5/Cat5e/Cat6 cables. When you're able to deploy 2.5G/5G/10G PoE devices in the future, you may need Cat6a or better cables. But you can never be wrong to buy good quality Ethernet cables made of oxygen-free copper.

4. Can I Connect a PoE Switch to Another PoE Switch?

Yes, you can. Power is supplied by the PSE to PD only when it detects that the device is capable of handling the power. Since the two PoE switches both function as PSEs, they will just do data communications.

The managed PoE switch is a switch that allows access to one or more interfaces for the purpose of configuration or management, such as Spanning Tree Protocol (STP), port speed, VLANs, etc. It can give you more control over your LAN traffic and offer advanced features to control that traffic. On the contrary, the PoE unmanaged switch just simply allows Ethernet devices to communicate with one another, such as a PC or network printer. It is pre-equipped with a fixed configuration and disallows any changes to this configuration.

7. How Can I Extend the Maximum Distance of PoE?

Devices such as PoE extenders and media converters can be used in the PoE link to extend PoE.