FS CommunityKnowledge CenterWhat Is Cat6 Plenum Cable And Why It Is More Expensive Than Cat6 Riser Cable?

What Is Cat6 Plenum Cable And Why It Is More Expensive Than Cat6 Riser Cable?

What Is Cat6 Plenum Cable?

First, the CMP cable (Communications Multipurpose Cable, Plenum) is the most demanding cable in the UL fire protection standard—the safety standard is UL910. It is designed to restrict flame propagation to no more than five feet and to limit the amount of smoke emitted during a fire. Cat6 plenum cable refers to Cat6 CMP cable, which fits for installation into air plenum spaces. Normally, a Cat6 plenum cable jacket is made up of either a low-smoke polyvinyl chloride (PVC) or a fluorinated ethylene polymer (FEP).

Where to Install Cat6 Plenum Cables?

The Cat6 plenum cables are designed to provide pathways for return airflows of buildings, facilitating air circulation for heating and air conditioning systems. These Cat6 network cables are typically deployed in the air return pressure boosting system used in ventilation ducts or air handling equipment (above a suspended ceiling or under a raised floor, for example). Since the fire and smoke can travel and spread quickly through these plenum spaces full of fresh oxygen, which may cause damage to the furniture and threaten people's lives, the Cat6 plenum cables are essential to prevent the fire from spreading out.

What Is Cat6 Riser Cable?

Cat6 riser cable, also regarded as Cat6 CMR cable (Communications Multipurpose Cable, Riser), is the commercial-grade cable in the UL standard, applicable to the UL1666 safety standard. It is constructed to prevent fires from spreading floor to floor in vertical installations. Thus, it is generally used for floor vertical wiring. Unlike a Cat6 plenum cable, a Cat6 riser cable usually has a jacket covering made up of relatively inexpensive PVC.

Where to Install Cat6 Riser Cables?

Non-plenum cables can be used anywhere except plenum space and air ducts. Thus, Cat6 riser cable is typically installed between floors in non-plenum areas. It is the primary conduit of a building's distribution system, carrying voice, data, and video into the different spaces and levels of a building from the service entrance point. In both commercial and residential buildings, Cat6 CMR cables are needed when running cable between floors through risers or vertical shafts.

NOTES for riser vs. plenum cables: 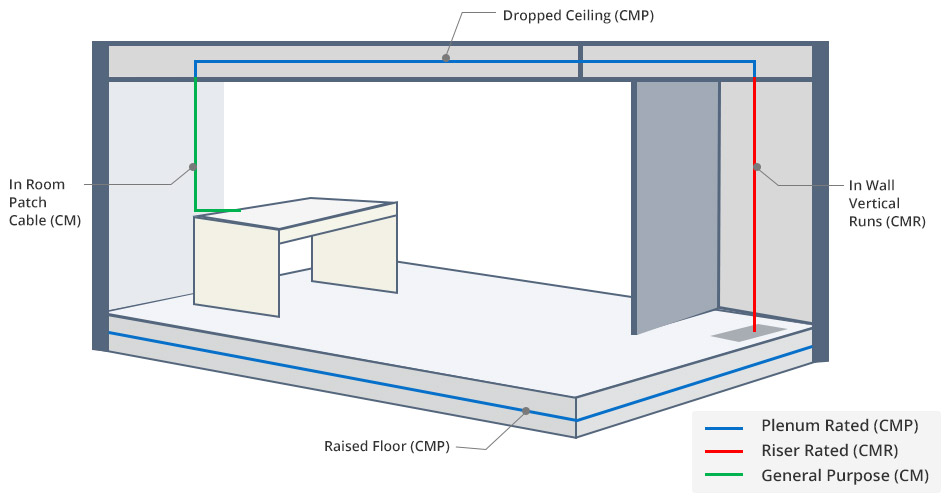 Cat6 plenum cable adopts low-smoke PVC or FEP, which has superior chemical resistance and electrical properties. It can support an operating temperature from -25 to 125 degrees Celsius and is resistant to all kinds of chemicals. Cat6 riser cable, on the other hand, uses relatively inexpensive PVC and such PVC material may release thick smoke and dangerous gases like hydrogen chloride in a fire. The operating temperature of a Cat6 riser cable is from 0 to 70 degrees Celsius. That's one of the reasons why a Cat6 plenum cable is more expensive than a riser one.

Check the chart listed below to get a clearer understanding of Cat6 CMP cable vs Cat6 CMR cable:

To sum up, both Cat6 plenum cables and Cat6 riser cables are flame retardant Cat6 Ethernet cables, the former one meets higher requirements in cable jacket material and safety standard, bringing more investment. Using CMR cable is cost-saving because it generally costs half or a third as much as CMP cable. Before you purchase, check with your insurance provider and local area building code.

If making a decision about riser vs. plenum cables is still weighing on you, just remember: When it comes to selecting the right cable rating, you won't go wrong when you put safety first. Not only will the right solution keep people safe, but it will also reduce building damage and protect against liability. Make your wise choice according to your actual needs.