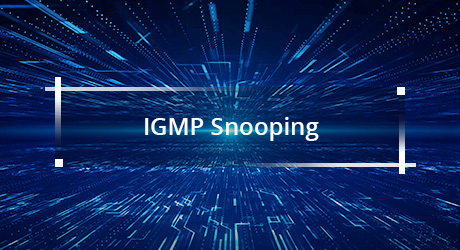 What Is IGMP Snooping?

Traditional network unicast mode fails to meet today’s data transmission requirements as it instead increases network load and consumes network bandwidth greatly. To solve the problem, IGMP (Internet Group Management Protocol) Snooping is developed and now widely configured on network multicast mode. What is IGMP Snooping? How does multicast IGMP Snooping work? And what should you know about IGMP Snooping configurations? All of these questions will be explained in this post.

What Is IGMP Snooping?

IGMP, an important feature of network multicast, is used to establish and manage memberships of hosts and routing devices in a multicast group. And IGMP Snooping controls these multicast groups by snooping and analyzing the multicast packets exchanged between the upstream Layer 3 multicast device and downstream hosts, so as to effectively suppress the unnecessary forwarding of multicast data in Layer 2 networks.

How Does IGMP Snooping Work? 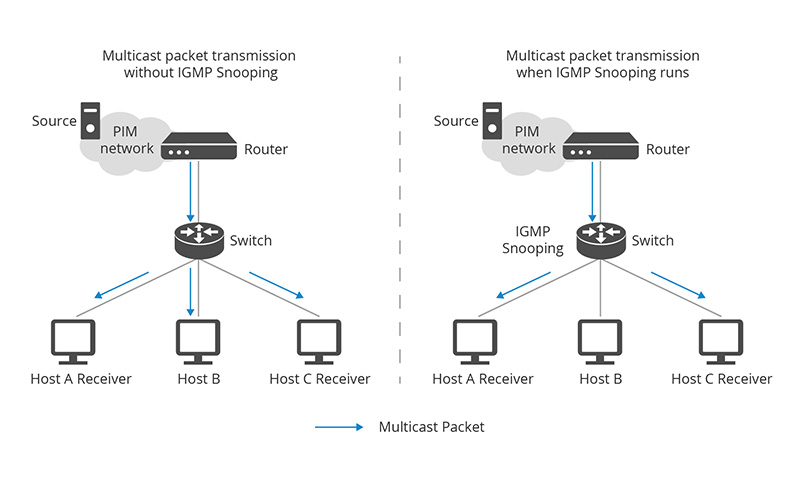 What Are Functions and Applications of IGMP Snooping?

Multicast Snooping helps network switches supporting IGMP Snooping and routers to efficiently transmit multicast data packets to the designated receivers. Its important values become more clear when a filtering method of multipoint transmission is missing: the incoming multicast packets are broadcast to all hosts in the broadcast domain. Especially in larger networks, IGMP Snooping switch reduces unnecessarily high traffic which can even lead to network congestion. Criminals can take advantage of this safe leak and flood individual hosts or the entire network with multicast packets to break them down, just like a typical DoS/DDoS attack.

If IGMP snooping command is enabled, bandwidth wastes and hostile attacks like these will be optimized greatly. All downstream hosts only receive multicast packets for which they have previously registered via group requests. Using network switch supporting IGMP Snooping is therefore worthwhile wherever a great deal of bandwidth is required. Examples include IPTV and other streaming services as well as web conference solutions. However, networks with only a few subscribers and hardly any multicast traffic does not benefit from the filter procedure. Even if the switch or router offers the multicast IGMP Snooping feature, it should remain off to prevent unnecessary eavesdropping.

IGMP has three protocol versions: V1, V2, and V3. Correspondingly, you can choose an IGMP snooping version on a Layer 2 device to process IGMP messages in different versions. Generally, IGMPv1 identifies the queried router based on the multicast routing protocol. IGMPv2 adds the capability of group-queries, allowing the querier to send messages to the hosts in a multicast group. IGMPv3 brings more improvements to support specific source filtering.

IGMP snooping is an important feature of network switches. When it is enabled, the bandwidth consumption will be reduced in a multi-access LAN environment so as to avoid flooding the entire VLAN, and network information security can also be improved at the same time. Thus figuring out IGMP Snooping configurations and functions helps you build an optimized network.

What Is DHCP Snooping and How It Works?