FS CommunityKnowledge CenterWhat Is Private VLAN and How It Works?

What Is Private VLAN and How It Works?

What Is Private VLAN?

Private VLAN (PVLAN), also known as port isolation, is a network segmentation technology for layer 2 networks, which enables the ports isolation or traffic segmentation under the same IP segment. By applying private VLAN in a shared network environment, it greatly saves IP addresses and improves switch port security within layer 2.

Promiscuous Port: This port type is able to send and receive frames from any other ports in the VLAN. It usually connects with a layer 3 switch, router, or other gateway devices.

Isolated Port: Existing in a sub-VLAN, the isolated port connects with a host and can only communicate with promiscuous ports.

Community Port: Community port is also resided in a sub-VLAN and connects with a host. However, it can only chat with promiscuous ports and other community ports in the same sub-VLAN.

Within a private VLAN, VLANs are accessible in three types:

Primary VLAN: This type of VLAN refers to the original VLAN, which can downstream frames to all its sub-VLANs (secondary VLANs) from promiscuous ports to all the host-connected ports. 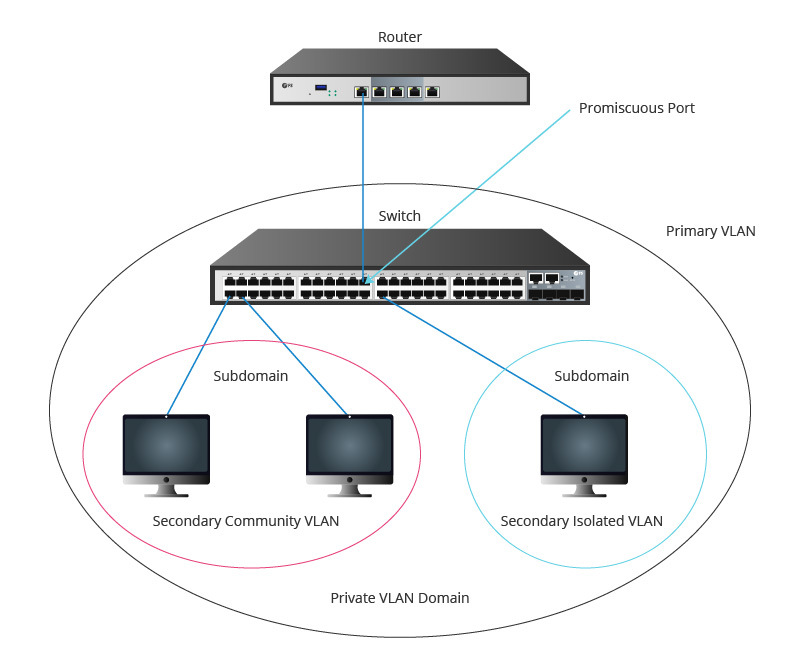 Generally, the private VLAN will go through the following stages :

1. The primary VLAN delivers frames downstream from the promiscuous port to all mapped hosts.

2. The isolated VLAN transports frames from the stub hosts upstream to the promiscuous port only.

To know more details about what is VLAN and how it works, please refer to Understanding Virtual LAN (VLAN) Technology.

1. How to Configure Private VLAN?

Step 1: Create primary and secondary VLANs and associate them.

Step 2: Configure isolated ports and community ports and bind them to the respective secondary VLANs.

Step 4: If inter-VLAN routing will be used, configure the primary switch virtual interface, and map secondary VLANs to the primary.

2. How to Configure Isolated Ports (Traffic Segmentation) on FS Switches?

Usually, different VLANs map to different IP subnets. Devices in a VLAN can be configured to share the same broadcast domain. It can be worked in both layer 2 and layer 3.