You may find that the IP security camera captures images that are partly dark and partly too bright to see any detail, that's the dynamic range -- the difference lies in light. Every surveillance camera relies on ideal lighting conditions to produce high-quality images. If there is too much light, the image will be distorted. Too little light will darken the image and make it unusable. To balance in lighting for clear video images, WDR technology is a key criterion when selecting a security camera.

What Is Wide Dynamic Range?

WDR, short for Wide Dynamic Range, is a term used in the surveillance-camera industry to refer to high-dynamic-range imaging. In the camera industry, the dynamic range stands for the contrast ratio between the darkest and brightest color tones that a camera can capture in a single exposure. A WDR camera can improve the quality of freeze frames, the reason is that the special software in the WDR camera helps balance the light to get a clear image, thus recording the illuminated and dark places. Then, how does WDR technology work in a network camera? 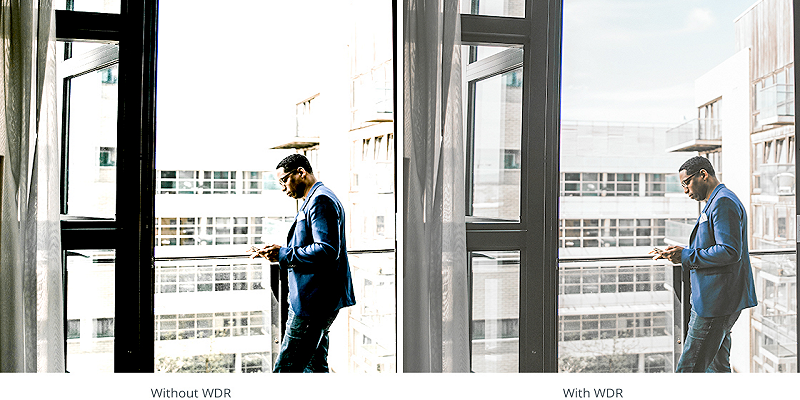 Figure: Without WDR vs With WDR

How Does Wide Dynamic Range Work?

With WDR technology, one PoE IP camera lens allows more light in some areas of the image and less light in other brighter areas through different shutter speeds. The sensor's exposure to light it receives from outside is controlled to obtain a balanced WDR image.

HDR is desirable in nearly every IP surveillance application, from the home user to corporate deployment, and WDR used to dominate the video surveillance industry. They are two different processing technologies. It's necessary for you to understand the differences between them.

By comparing HDR and WDR, we recommend WDR technology for IP cameras for the following reasons.


Where to Install WDR Cameras?

It is because of the various advantages mentioned of WDR that it can solve the problem of light exposure, so WDR network camera is widely used in various video surveillance scenarios. Examples of locations where difficult high-contrast lighting conditions typically prevail include:

The most common place for WDR cameras is monitoring building entrances or windows against intense backlight. Whether it's a store, bank, ATM, transportation facility, restaurant, or hospital—every facility must have entrance doors that bring in bright light compared to the interior space. WDR cameras can compensate for areas that are too bright or too dark and provide a sharp snapshot or video.

In a high-contrast scene where cars often enter a parking lot, a darkened garage, and a car with bright headlights heading towards the surveillance cameras, the WDR camera will be able to capture license plates more clearly.

The sun changes position throughout the day. Outdoor surveillance cameras often face strong sunlight, contrasting with the shadows of buildings or areas without sunlight, WDR cameras can compensate for this difference and offer a clear image.