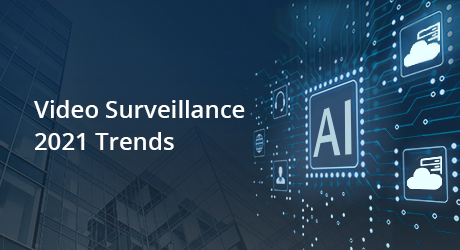 Since security and safety are still the highest priority of every organization present around the globe, all industries and companies are avidly looking forward to the latest and trending technologies in the video surveillance industry where the rapid advancement of artificial intelligence has spurred a shift from traditional video surveillance to a hybrid cloud-based and AI-powered video surveillance.

Business video surveillance systems backed by AI technology have a number of important features and abilities. The application of AI (Artificial intelligence) has vastly improved the accuracy of detection, reducing the incidence of false alarms. Among all the improvements that AI has brought to video surveillance, human analytics and facial recognition are of the highest expectation.

Artificial intelligence has enabled security cameras with human analytics to identify human behavior for both security-related and non-security-related purposes, such as recognition of an individual passing by, and conduct more complex behavior analysis such as motion heatmapping, foot traffic counting, and suspicious behavior.

For security-related purposes, intelligent analytics in video surveillance can gather access data and detect violation behaviors and emergencies such as fires, floods, etc, to avoid security risks. For example, it can be used to monitor traffic flow to identify some dangerous incidents. As for non-security-related purposes, which in other words is mostly to improve business management efficiency, a typical example is that heatmapping is expected to be taken advantage of by many businesses to measure density and activity across, so as to improve staff awareness and customer service.

Facial recognition technology is getting more intelligent and precise. With higher-resolution cameras and the support of more advanced artificial intelligence, the applications of facial recognition are expected to be more often adopted in multiple business video surveillance solutions in the coming years, such as solutions for transportation, commercial environments, etc.

Video management needs to be achieved manually in traditional business video surveillance systems with business owners investing in monitoring staff. But now with AI technology, data analysis and corresponding decision-making actions can be achieved autonomously with AI-powered video management software rather than human intervention. Suspicious behaviors and high-risk scenarios within the monitored area can be detected by the software and the AI in the VMS will take the next step to react, which could be an alert message sent to the first responder to minimize loss and risks.

Cloud is being used among all sorts of businesses due to the many benefits it provides. A cutting-edge cloud-based surveillance solution has dramatically revolutionized the way security systems operate. It cut the costs of personnel and requires far fewer devices maintenance than traditional on-premise systems. What other benefits does it bring into business video surveillance? Keep reading to find out.

Video footage recorded by an onsite recorder such as an DVR is easier and more vulnerable to theft or damage. If the recorder in a traditional surveillance system gets damaged, the footage will be gone for good. But having the footage recorded to the cloud will provide additional data backup. In other words, no matter how badly the physical video surveillance system is destroyed, the users will still have the access to the footage which has already been backed up in the cloud.

In traditional video surveillance, business owners have to spend money on network video recorders (NVRs) to connect the cameras and store the video footage. The storage space of the NVR and how many channels the NVR has depend on how many cameras will be deployed in the system. But in cloud video surveillance solutions with flexible cloud storage, you won't need video recorders any more. In addition, If the users require larger storage space, it can be updated to a larger one without changing any deployment.

Not just NVRs, neither are other extensive on-premise devices or equipment required in cloud video security systems, which not only saves lots of expenditures on hardware and devices, but also makes the system inherently more scalable with no need for complex on-site installations.

It's an inevitable trend that AI and cloud will take over in business video surveillance systems. With increased security, ease of use and so many other benefits it brings, hybrid cloud video surveillance will be for sure a better alternative to traditional one for many businesses.