As your small business grows, you may look for ways to stay competitive, reduce costs, and improve bandwidth in terms of network switching infrastructure. As a more cost-effective alternative to fiber counterparts, 1000BASE-T Gigabit switches have gained increasing popularity in enterprise networks to fully utilize cat5e/6/6a cabling. How to choose the most appropriate Gigabit Ethernet switch in the dazzling market? We’re gonna explore it by comparing two of FS most prevailing 1000BASE-T Gigabit managed Ethernet switches: S3800-24T4S and S3800-48T4S.

By checking the specific parameters of S3800-24T4S and S3800-48T4S 1000BASE-T Gigabit Ethernet switch, it is apparent to find many other differences between them. Since S3800-48T4S 48 port switch provides higher port density than S3800-24T4S 24 port switch, the former comes with larger switch fabric capacity and faster forwarding rate than the latter. Seen from the table below, it is obvious that the airflow direction of these two switches also differs from each other due to the different positions of the two built-in cooling fans.

Both S3800-24T4S and S3800-48T4S 1000BASE-T Gigabit Ethernet switches possess layer 2+ features such as LACP, QinQ, port monitoring and remote loop detecting. As fully managed switches, these two 1000BASE-T switches can support VLAN setup and various traffic classification as well as QoS flow control to guarantee the transmission of high priority packets. Besides, they both support DHCP snooping and IP source guard to effectively protect the user, equipment and network availability. The most significant difference between them is that S3800-24T4S is a stackabe switch while S3800-48T4S is not. S3800-24T4S 24 port switch provides true stacking of up to 4 switches, allowing you to configure, manage and troubleshoot multiple physical switches as a single unit. Therefore, it fits better for IP MAN convergence layer and large-scale enterprise zone as well as the core of the network layer.

Enterprise Backbone Switch FS S3800-24T4S 24 port 1000BASE-T switch is a perfect choice for mixing Gigabit Ethernet and Fast Ethernet installations, which paves the way for any expected future expansion. The figure below shows FS S3800-24T4S switch operating as an enterprise backbone for a small LAN. It provides dedicated 1000 Mbps full-duplex connections to servers and 10/100 Mbps full-duplex connections between subscribers (IP phones/desktops here) and edge switches. All these connections are realized by cat5e/6/6a UTP cabling. 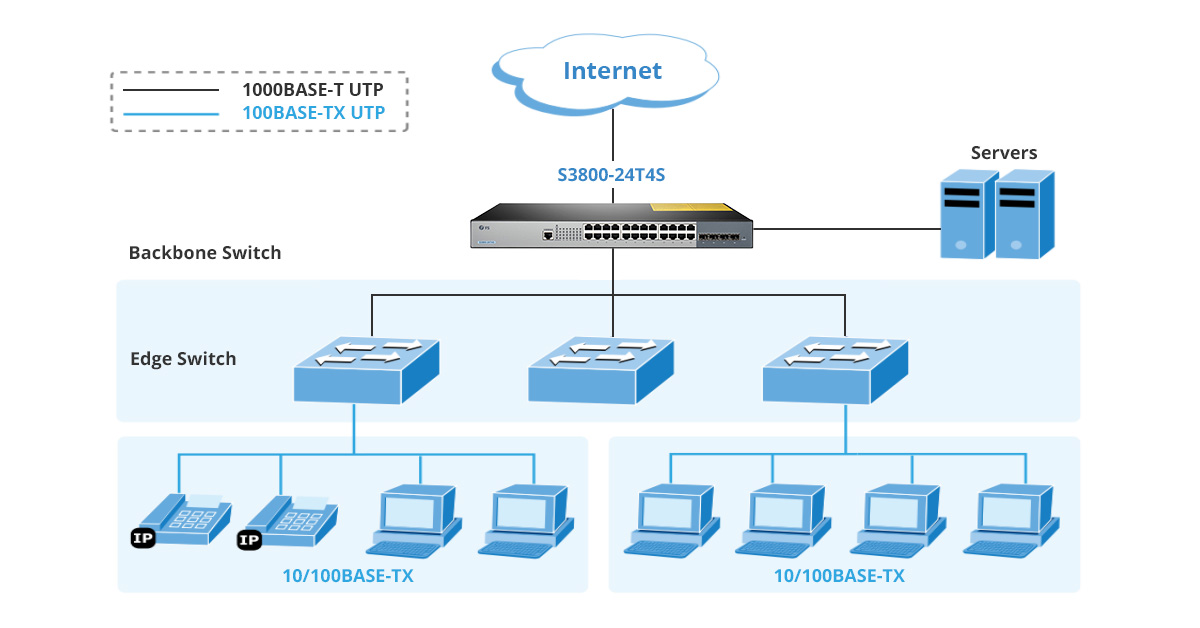 Server Farm Switch Providing 24 Gigabit Ethernet ports, FS S3800-24T4S 1000BASE-T Gigabit Ethernet switch is ideal to be used as a server farm switch connecting to the servers and powerful desktops. As shown in the figure below, FS S3800-24T4S 24 port switch functions as a server farm switch between the server rack and the NAS storage. It’s linked to FS S3800-48T4S 48 port switch which woks as the backbone to set up connections between the router and edge switches. In this case, the connections attached to server farm switch and backbone switch are 1000BASE-T UTP cabling. And the downlinks between edge switches and end users (IP phones/desktops here) are accomplished via 10/100BASE-TX UTP cabling. 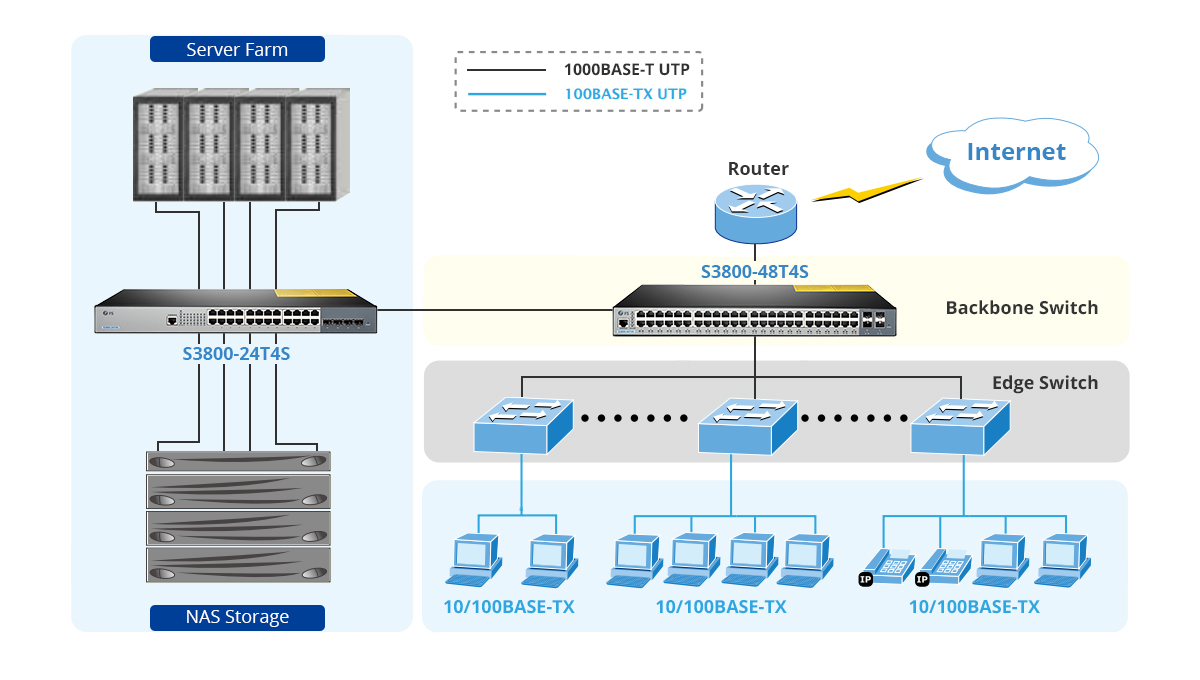 2.Can FS S3800 series 1000BASE-T switches be powered using RPS/XPS and do they support PoE?

S3800 series 1000BASE-T switches can supply custom service for built-in Redundant Power System (RPS), but they do not support PoE.

3.What are the working modes of FS S3800 series 1000BASE-T switches? Do they support auto-negotiation between switches?

These switches support full duplex and half duplex mode, which also enable auto-negotiation of ports between devices.

4.What are the ways in which the switches upgrade , and how to upgrade?

5.Can the dual power supplies in S3800 series 1000BASE-T switches be replaceable?

FS S3800 series power supplies are replaceable. We can provide power module if you can replace it yourself. However, we don't recommend the customer replace the power supply himself, as we will not be able to provide you a hardware warranty if the components would have been removed or invalid.

FS S3800 series 1000BASE-T Gigabit Ethernet switches provide the most flexibility, the lowest cost media and is backward compatible with existing Gigabit Ethernet cabling infrastructure. When choosing between S3800-24T4S and S3800-48T4S 1000BASE-T switches, you ought to give priority to the amount of traffic delivered as well as your current network conditions. Of course, the appliance and maintenance should also be taken into account as they may determine the total cost and investment for any future upgrade. More inquiries about S3800-24T4S and S3800-48T4S 1000BASE-T switches, please feel free to contact us via sales@fs.com.