In order to meet the challenges of explosive growth in network utilization while providing the opportunity to differentiate services, MPLS (Multiprotocol Label Switching) technology has dominated the enterprise private network market for nearly a decade. MPLS switches have been widely deployed as they integrate the data switching capability of Layer 2 with the proven scalability of Layer 3 routing without sacrificing the existing network infrastructure. This post will focus on the MPLS feature of FS S5800-48F4S SFP switch and its applications based on MPLS platform. 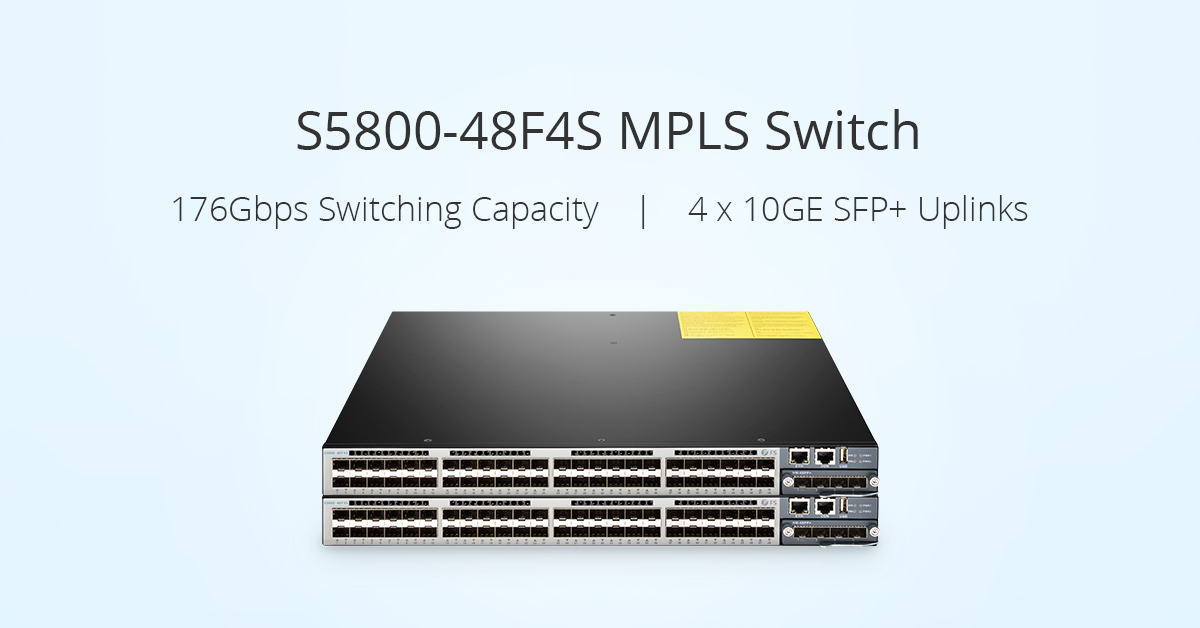 MPLS is a protocol that uses labels instead of IP addresses for fast packets forwarding and routing within a network. MPLS provides a method to map IP addresses to fixed-length labels, and then classifies packets with the same forwarding process as the so called Forwarding Equivalence Class (FEC). Each FEC is represented by a certain label. In MPLS network, the MPLS switch transfers data by popping off its label and sending the packet to the next switch label in the sequence. MPLS perfectly integrates the performance and traffic management capabilities of Layer 2 switching with the scalability and flexibility of Layer 3 routing.

In a conventional network, each switch performs an IP routing lookup, determines a next-hop based on its routing table, and then forwards a packet to that next-hop. With MPLS, only the first device does a routing lookup and directly finds the ultimate destination along with a path to that destination. It omits the process of finding the next-hop, thus simplifying the forwarding procedures. MPLS has the following advantages over conventional packet forwarding:

To cater for the MPLS architecture in cloud computing and data center networks, many suppliers have developed various Ethernet switches suited for MPLS platform. For example, FS S5800-48F4S MPLS switch is a 10gbe switch with Layer 2 and Layer 3 features. It enables peer label switching router (LSR) in an MPLS network to exchange label binding information for supporting hop-by-hop forwarding. Each LSR in the network makes an independent, local decision as to which label value to use to represent a forwarding equivalence class. With support for advanced features, including MLAG, IPv4/IPv6, SFLOW, SNMP etc, FS S5800-48F4S 10GbE MPLS switch is ideal for traditional or fully virtualized data centers.

As mentioned above, MPLS combines the powerful routing function of Layer 3 and the efficient forwarding mechanism of traditional Layer 2 in IP networks. It adopts the connection-oriented approach in the forwarding plane, which is very similar to the forwarding methods of existing Layer 2 network. All these features enable MPLS integrated with Layer 2 network seamlessly, thus providing optimum solutions for Virtual Private Network (VPN) and Quality of Service (QoS).

MPLS VPN refers to a method that utilizes MPLS to build a corporate IP private network over a backbone broadband IP network to implement cross-regional, secure and high-speed multi-service communications. MPLS-based VPN consists of a set of sites that are interconnected by means of an MPLS provider core network. At each customer site, one or more customer edge switches are attached to one or more provider edge routers. Figure 2 illustrates a MPLS backbone network which includes three customer sites. Here we use three FS S5800-48F4S MPLS switches, each of which acts as a customer edge switch connected to VPN1, VPN2 and VPN3 respectively. Three provider edge routers are implemented here to manage VPN in the MPLS backbone network.

MPLS also includes inherent Quality of Service (QoS) support, enabling users to specify limits for the packet loss and latency for each traffic type. As illustrated in Figure 3, two routers are deployed at provider edges to allow traffic flows in the MPLS core network. FS S5800-48F4S MPLS switches function at customer sites to allow subscribers to leverage a single network connection for multiple applications (such as voice and video here) without impacting desired performance. With an MPLS-based QoS environment, each application has a priority assigned to ensure that bandwidth is optimized by the needs of that application. This in turn allows IT managers to utilize a single connection for multiple applications and avoid the costs associated with multiple access charges.

MPLS technology proves to be the best mix of Layer 2 and Layer 3 networks. By supporting MPLS services, FS S5800-48F4S MPLS switch provides more scalability, better capability of management and higher efficiency by ASIC forwarding compared with other packet forwarding solutions. FS also provides other type of MPLS switch such as FS S5900-24S with advanced L2/L3/MPLS features to meet the requirements in Carrier Ethernet and Enterprise network applications. We can always satisfy your switching requirements by offering various types of high performance network switches, such as Gigabit PoE switch, 10gb switch, 100gb switch, etc. They are all with advanced functions and ready to serve for comprehensive networking solutions.