Hyper-converged infrastructure integrates compute and storage into a single server. This eliminates the bulk of legacy standalone hypervisors and storage complexity, while reducing power and space. As shown in the figure below, with non-converged architecture, physical servers operate a virtualization hypervisor that manages each of the virtual machines including the network switch and the Fibre Channel switch that were created on the server. By contrast, with converged architecture, the link between storage and physical server was built up via the converged network and storage switch. While in hyper-converged infrastructure, a storage controller runs as a service on every node in the cluster and merges the local storage within each server into a VSAN, thus creating a shared and distributed layer of storage. 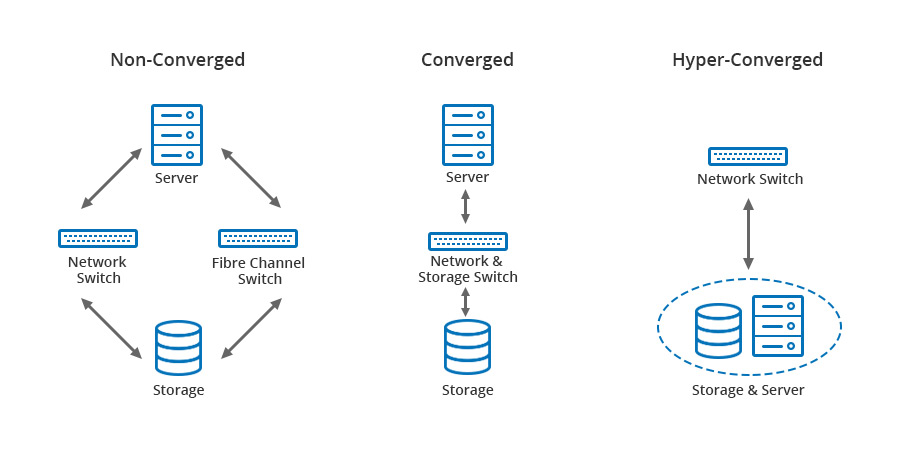 As there are no separate storage requirements to be provisioned in HCI, the deployment is simple and fast. Through the addition of more nodes, scaling becomes easy. Due to the all-in-one configuration, HCI solution allows you to build, scale and protect IT infrastructure more affordably and effectively than any other option available.

Instead of being managed by Web interface, the FS S5800-8TF12S hyper-converged infrastructure switch supports multiple smart management with two RJ45 management and console ports. SNMP (Simple Network Management Protocol) is also supported by this switch. Thus when managing several switches in a network, it is possible to make the changes automatically to all switches. What about the common switches managed only by Web interface? It will be a nightmare when an SMB needs to configure multiple switches in the network, because there’s no way to script the push out of changes if not parse the web pages.

In FS S5800-8TF12S HCI switch, the traffic classification is based on the combination of the MAC address, IPv4/IPv6 address, L2 protocol header, TCP/UDP, outgoing interface, and 802.1p field. The traffic shaping is based on interfaces and queues. Thus the traffic flow which are visible and can be monitored in real time. With the DSCP remarking, the video and voice traffic that is sensitive to network delays can be prioritized over other data traffic, so the smooth video streaming and reliable VoIP calls are ensured. Besides, the FS S5800-8TF12S switch comes with comprehensive functions that can help in trouble-shooting. Some basic functions include Ping, Traceroute, Link Layer Discovery Protocol (LLDP), Syslog, Trap, Online Diagnostics and Debug.

MLAG and stacking are two different concepts. MLAG is the ability of switches to appear as a single switch at layer 2, so that bundles of links in the form of LAGs can be diversely connected to each switch and appear as one. While in stacking, independent keep alive link between the switches. S5800-8TF12S is not stackable, but it supports MLAG. MLAG can achieve the effect of stacking, two devices can achieve cross device port aggregation. MLAG configuration is relatively simple, and it doesn’t need to reboot after the configuration is completed. More information about stackable switch, please kindly visit How to Stack FS 3800 Series Ethernet Switches.

We are also asked if we have centralized management software to manage multiple switches. Actually we do not have the centralized management software. But the switch can be programmed through an open RPC API (Application Programming Interface) to achieve several switches are managed. The RPC API interface gives applications access to a variety of run-time services and control of multiple switches interactions at run time.

HCI offers tremendous integrated services including backup, data protection and highly redundant storage capacity which allow seamless management and expansion of various compute, storage and network. It’s apparent that the rapidly growing market for HCI have created the need for 10 Gigabit switch optimized for making these deployments both high performance and efficient. An 8-12 ports 10G SFP+ Ethernet switch is generally enough for hyper-converged appliance expansion, which is rational considering the expenditure for expansion as well. FS.com S5800-8TF12S hyper-converged infrastructure switch meets these needs, making it the perfect switch for HCI and the software-defined storage clusters for 10GbE connectivity.