Nowadays, Gigabit switches have been popular in small and medium enterprise networks. With the widespread of smart home, multiple devices like computers, servers, game systems, 4K HDTVs, DVRs, etc, are ever-increasing in home use. As a result, home Gigabit switch is also needed for home users to increase the throughput of a local network. The number of ports provided by the switch corresponds to the number of devices that can be connected. In the Gigabit Ethernet switch market, the 48 Port switch Gigabit is the most attractive option in today’s smart home and small to medium-sized businesses (SMBs). To meet the demand for more ports without sacrificing bandwidth or speed, FS.com has introduced S3800-48T4S 48 port Gigabit switch which supports VLAN, QoS, Web GUI and ACL management capabilities.

As the part of S3800 series family, S3800-48T4S is a 48 100/1000BASE-T ports and 4 10G SFP+ uplink ports Gigabit switch that is designed for medium or larger network environment. Its 10G uplink port design provides an excellent solution for expanding your network from 1G to 10G. With a rich enterprise-class features, this 48 port switch can easily configured and monitored through a web-based graphical user interface. Including rack-mount brackets, it can be easily installed in the rack environment. It is also available in single power and dual power version - two separate supplies which can be used as alternatives and can be selected as per need (circuit requirements). In a nutshell, the S3800-48T4S 48 port Gigabit switch is the perfect L2 access switch solution with 10GbE uplink for converged data, video and voice networking.

The S3800-48T4S 48 port gigabit switch is a L2+ managed switch, which is fully featured Layer 2 switch and added some Layer 3 features like DHCP snooping or IP routing. This Gigabit managed switch delivers the most comprehensive set of Layer 2+ full management features, which are powerful to provide network control, management, monitor and security requests. As a result, it can be deployed as aggregation/access switches in enterprise networks or as core switches in relatively smaller networks. 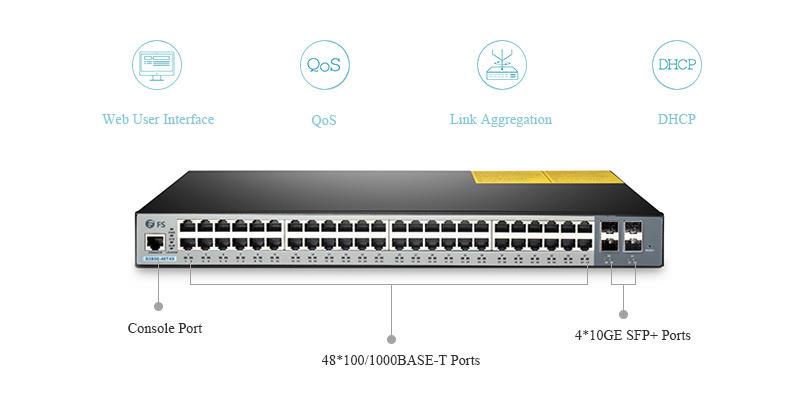 What Management Functions Do S3800-48T4S Switch Support? Does It Support Web GUI?

Management functions allow network administrators to manually control several aspects of a Ethernet switch’s functions, such as the ability to enable/disable the ports, and to regulate port speed and to setup a VLAN. The S3800-48T4S 48 port Gigabit switch supports Web and CLI management. A web user interface is built into the switch. You can use either the service port interface or the management interface to access the GUI, but we recommend that you use the service-port interface. When configuring the Web GUI, you only need to enable the “http enable” in the configuration mode. Besides, this switch can be upgraded via local, FTP, TFTP, console or WEB and CLI. FS.com will provide the latest version and version specification for free.

How Many VLANs Can S3800-48T4S Switch Support? Is It Possible to Configure Inter VLAN Routing?

VLAN is a logically-independent network that can group together a collection of devices from different physical LANs. Larger business computer networks often set up VLANs to re-partition their network for improved traffic management. So VLAN support is typically found on high-level enterprise switches. The S3800-48T4S 48 port Gigabit switch can forward up to 4K VLANs, and you can also configure inter VLAN routing. If you are interested in some basic knowledge about VLAN, you can refer to this tutorial: VLAN: How Does It Change Your Network Management?

How Do S3800-48T4S Switch Prevent Unauthorized Users from Accessing the Network?

From a security perspective, S3800-48T4S 48 port Gigabit switch supports 802.1x endpoint authentication that works in conjunction with a RADIUS server to authenticate users as they access a network. Additionally, portions of the network can be restricted by using ACLs (access control lists). An additional protection method is to use port security, which helps ensure that the appropriate user is on the network by limiting access to the port based on MAC addresses.

Dose S3800-48T4S Switch Support LACP(Link Aggregation Control Protocol)? How Can I Benefit from It?

Yes, this switch support port aggregation/link aggregation. The common ports support aggregation up to 8 ports while the 10G ports support up to 4 ports. The advantages of link aggregation in contrast with conventional connections using an individual cable include higher potential transmission speed and higher accessibility. Beyond that, LACP allows the exchange of information with regard to the link aggregation between the two members. If one physical links fails, it will detect if the point-to-point connection is using a media converter, so that the link status at the switching port remains up.

Does S3800-48T4S Switch Have the Ability to Assign IP Addresses?

Yes, the S3800-48T4S 48 port Gigabit switch supports DHCP which can assign IP addresses automatically to internal networks or network service providers. (DHCP is a protocol used to provide quick, automatic, and central management for the distribution of IP addresses within a network.) From an administrative point of view, using DHCP makes a network much easier to manage. Because the network administrators do not need to manually assign addresses to each and every device on the network.

As mentioned above, the S3800-48T4S is a 48 port Gigabit switch with 4*10G uplink ports. Generally speaking, all four 10GE ports can be used for network uplinks to servers and storage devices, or split with two ports for local or distant stacking and two ports for uplinks and link aggregation. However, unlike S3800-24T4S and S3800-24F4S Gigabit stack switches, S3800-48T4S does not support stacking. So what is the function of these uplink ports on the S3800-48T4S Gigabit switch? On the whole, the uplink port on a switch is where it connects “up” towards the rest of the network. The uplink bandwidth is shared by all the devices trying to communicate with the rest of the network at the same time. To put it simple, the uplink port is designed for redundancy purposes. By 10G uplink ports, this S3800-48T4S 48 port Gigabit switch provides high flexibility and higher bandwidth connectivity to 10G switches or servers, and other attached devices which support 10G interface. The users can also aggregate the 10G ports as trunk group to enlarge bandwidth. All in all, the 10G uplink port design is important for higher bandwidth uplink request when cascaded with other switches.

The S3800-48T4S 48 port Gigabit switch comes with four 10G SFP+ ports, so it can use a variety of 10G optical transceivers and cable to connect with other network devices, including 10G SFP+, BiDi SFP+, CWDM SFP+, DWDM SFP+, 10GBASE-T SFP+, 10G DAC cable and AOC cable. Since this switch allows backwards compatibilty on 1G SFP, its SFP+ ports can be plugged into SFP modules, such as SFP, BiDi SFP, CWDM SFP, DWDM SFP, 1000BASE-T SFP. All of these optical components can be found on FS.com. S3800-48T4S switch is also compatible with the mainstream transceivers of other brand, but we recommend you to use FS.com original modules.

With the increase in data rates from wireless devices, core traffic is increased to 10G to prevent bottlenecking at the Ethernet switch. Whereas in the past 10G uplinks ports have been too expensive to utilize frequently, the S3800-48T4S 48 port Gigabit switch is now a highly affordable and cost effective way for SMBs or homelab to upgrade to 10G between virtualized servers, backups, and between switches. Any requirements for this S3800-48T4S switch and its supported modules and cables, please contact us via sales@fs.com.